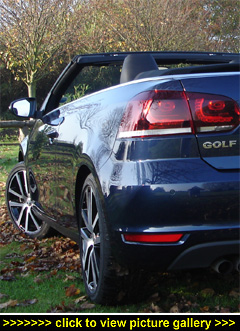 “And now for some good news —
after going AWOL for almost a
decade, the prodigal Golf convertible
is once again back on British roads.
And it’s in better shape than ever...”

A TRUE DROPHEAD, the Golf Cabriolet sports a fully-automatic, electrically-powered fabric roof. I know you'll be itching to get the top down but if you can bear to, try it first with the roof up. Thanks to its three-layered, well-insulated fabric hood, it's hard to tell the difference between this convertible Golf and its metal-topped hatchback stablemates.

Next, drop all four windows (a quick one-shot operation) and enjoy the car as a pillarless coupe — very chic on hot summer days when 'cool' is more than a sense of style.

But the best part comes last — drop that top. Although not a good idea in moving traffic as it distracts other drivers (Ooh! Look at that!), the roof can be raised and lowered at speeds up to around 18mph. But it's perfect for dealing with those unpredictable British showers.

To open or close, simply press the switch underneath the centre armrest between the front seats. There's nothing to unlatch; it's a fully automatic operation.

Nine seconds later, there'll be nothing between you and the sky. And every sign of the roof is gone; folded flush with the rear deck in its dedicated well behind the rear seats.

If you're driving alone, or with just one passenger, it's only a moment's work to fit the wind deflector; not only does it cover the rear compartment at deck level, but it also provides a large flip-up mesh screen that makes the front cabin even cosier and free from draughts. When not in use the wind deflector can be folded to a quarter of its normal size for easy storage.

A nice touch is that it can be left in situ when raising or lowering the top; with the top up, it acts as a useful privacy blind, effectively concealing items being carried on the back seats. And it works very well: at low speeds there's barely any wind intrusion at all and even bowling along at motorway speeds with the AirCon keeping you fresh, you can chat to your passenger without raising your voice.

The cabin manages to be smart but at the same time functional — nothing wrong with a place for everything and everything in its place, as it is in the Golf Cabriolet. The attractive T-shaped fascia is logical enough to please Mr Spock and wherever you look you'll find attention to detail, smart trim materials, and first-rate build quality.

Another well-considered touch is the climate controls system's ability to take into account the amount of sunlight penetration into the cabin and compensate for it on both the passenger's and the driver's side. Drop the roof on a hot day and you automatically get more cold air through the vents; do so on a cool day and you'll get more heat. Clever.

Sited dead ahead of the driver, the dials are crystal clear; one large one for speed and another for revs, both in their own nacelle and each containing a smaller mini-gauge for, respectively, temperature and fuel. You'll also find plenty of storage solutions dotted around the cockpit, including a cooled glovebox and all the essential media connections.

The optional 'Vienna' leather upholstery upgrade costs Ł1,960 but for your money you also get excellent 3-stage heated front sports seats — not only do they warm as much of your body as touches the seat base and backrest, but they're nicely bolstered and proved to be comfortable and supportive on short and long journeys.

Adding to the cabin's appeal is a three-spoke multifunction wheel that adjusts for height and reach, with a rim that's as good to hold and use as it looks.

And with seats that adjust for height, reach, tilt and lumbar support, just about anyone can set a driving position that's spot-on — helped by — even with the roof up — A1 visibility. The fabric top, incidentally, is trimmed and finished as well as the rest of the cabin.

And proper rear seats? Certainly. With the same wheelbase as a Golf hatchback, the two-door Cabriolet has enough room, and tailored seats, for two adults. So long as those sitting up front aren't too tall there's ample room to sit comfortably, helped by the generous roofline that provides decent headroom even for a six-footer. Easy action tilt-and-slide front seats allow quick entry or exit for those riding in the back.

Safety-conscious passengers may remark on the apparent lack of roll-over protection — no problem; the Cabriolet's roll-over bars are there but, like a derringer hidden up a gambler's sleeve, they remain discreetly out of sight until needed when they deploy in milliseconds.

Commendably, someone at VW understood that if you're going to seat four adults, you'll also need some matching boot space. Which explains why the Golf Cabriolet has a usable 250-litre boot. And, unlike some rivals, there's no catch: you get the same 250 litres for your luggage regardless of whether the roof is up or down.

Plus the rear seatbacks — split 50:50 — also fold down in case you should need to load-through larger items. Yet another nice feature is the VW badge on the self-lifting bootlid; it tilts inwards to release and then doubles as a handle that stays clean in mucky weather.

GT models come with a sports suspension that's 15mm lower than standard with firmer springs and damper settings, along with very swish (gloss black with polished machined spoke faces) 18-inch wheels and lo-pro 225/40 Bridgestone rubber. But if you think that this means you're in for a tooth-rattling ride then you're mistaken because the GT actually rides extremely well over even poor road surfaces. And it feels all-of-a-piece, with no telltale body shake either roof up or down.

The Cabriolet uses the Golf hatchback's running gear so you can take for granted a good handling chassis — one that throws in a decent level of driver involvement. The Cabriolet GT feel's very much a Golf through corners; grippy, and reassuringly balanced during quick changes of direction. The electro-mechanical power steering is also typically Golf hatch: very sharp and firm when driving hard. And the GT brakes effortlessly.

However, if you're hell-bent on pushing really hard, just remember that this is not a convertible Golf GTI and that the Cabriolet GT is not intended to be a hardcore sports car. That's not to say it's not an entertaining driver, because it is.

The seven-speed, dual-clutch automatic DSG auto is optional on GT models (adding Ł1,300 to the price) but our GT spec test car came with the standard-fit six-speed manual 'box.

No complaints with that: it's slick and accurate. And the ratios are well stacked to match the engine's power band so the driver can make the best of the meaty mid-range torque.

The supercharged and turboed four-cylinder 1,390cc engine is smooth and punchy; its 177lb ft of torque is available from 1,500 all the way to 4,500rpm and provides ample power combined with a relatively frugal thirst for unleaded.

Driving distances between fuel stops are pretty good too, thanks to the respectable 33.1mpg we averaged over a mix of main and minor roads and shopping trips into town. Don't take advantage of the GT's dynamic ability and power and you'll likely push this as high as the official 44.1mpg. But will you want to?

This latest Golf Cabriolet offers almost as much refinement along with all the qualities of its all-of-a-piece hatchback sister, with the added bonus of fresh air and great sunsets whenever you're in the mood. And it looks great with the roof up or down. — MotorBar