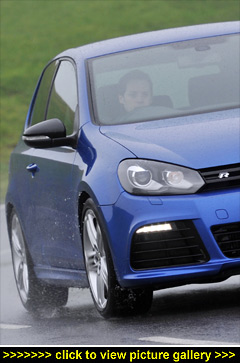 “The Golf R is rapid with a capital ‘R’,
scorching off the line to 62mph in
5.5 seconds. Resist lifting your right
foot and you’ll keep accelerating until
you run out of road or you reach the
R’s 155mph top speed...”

AND DO YOU KNOW WHAT'S REALLY, REALLY NICE about this new go-really-faster Golf? It's that it's so understated. Most people looking at it would never guess just how quick it is.

Okay so there's double-barrelled central-exit exhaust pipes, LED running lights and smoked red LED tail lights, roof spoiler, tinted rear glass, black mirrors and a set of extremely smart five-bar 18-inch alloys all topped off with striking metallic blue paintwork — but nothing, absolutely nothing showy. Even the engine and exhaust note are restrained. But with 266bhp under the bonnet, who needs bling! So, R for Rapid and R for Reserved.

Understated it might be but the Golf R can't quite hide its light under a bush: look carefully enough and you'll spot what it is that gives the R its air of purposefulness: the sport suspension's reduced ride height, putting the R 25mm closer to the black-top.

Taking up where the standard Golf GTI leaves off, and trumping the previous hottest Golf, the R32, the R comes with not only a different powerplant (a 35kg lighter, 1,984cc turboed four; out has gone the 3.2 V6 used in the previous R32) but running the latest version of Volkswagen's 4Motion all-wheel drive system. And it's a marked step-up from the previous 4WD system, endowing the new R with significantly improved road manners.

Refined is yet another facet of the R's character. For a whizz-bang hot-hatch, it's amazingly smooth and civilised. With its 'wolf in sheep's clothing' persona, the R's only real rival is its cousin, the equally desirable Audi S3.

Pull open a door (it shuts exactly like on the Golf television advert: with a quality 'thunk') and slip into the R's top drawer cabin. Peel off the 'R' badging and it's basically a Golf — but that's a very good thing guaranteeing, as it does, first class ergonomics, first class build quality and first class trim and materials.

The Sports seats provide first rate support in all the right places (the side bolstering is spot on) whether you're just popping out to the shops, driving from one end of the country to the other or really giving the R some stick. Both front seats feature manual height and manual lumbar adjustment; the longish seat bases provide decent under-knee support.

The smart fabric upholstery feels great and doesn't cling to clothing; and the grey suede sections on the side bolstering are a nice touch and a good foil to the 3D black mesh seat centre panels. Headrests are also commendable, with buttons on the sides for easy adjustment.

Add in generous height and reach adjustment of the wheel and a perfect driving position is guaranteed. The leather-wrapped rim is just the right thickness, with perforated leather 'work' areas. Other nice touches include the white illuminated instruments with blue needles that not only look classy but underscore the conspicuously good cabin design.

Internally the R is as practical as a regular Golf; that means decent head, leg, knee, foot, shoulder and elbow room. Continuing the practical theme, you'll find useful storage areas sited throughout the cabin including a cooled glovebox and a drop down storage drawer on the right of the fascia. The front centre armrest adjusts for height and can also be moved forwards without cramping the traditional handbrake — it's well padded and large enough to share. Below the armrest is a smallish oddments box while ahead of it is yet another cubby with a sliding lid that can serve as a twin cupholder or, if you remove the genuine bottle-opener divider (a witty touch!), a larger bin.

The three-door version we tested is for most people the sleeker-looking of the two Rs and while five-door models will suit the family Golf aficionado, there's little compromise with the three-door; smooth-running tilt 'n' slide front seats make for easy entry and exit. Three in the back will go and there are 3-point belts and comfortable headrests for everyone. As usual, two will be far more comfortable thanks to accommodating outer armrests and a large, wide and padded central armrest.

The rear seats are well-cushioned and there's room in all directions — near-six-footers in the front and the back is not a problem. The small but handy pockets on the back of the front seats come in useful and the rear cabin, despite the predominately black colour scheme, feels airy thanks to large glass areas and a full-width rear screen.

Opening up the boot is done via the swivelling VW roundel boot-lid badge that functions as both as a release and a handle. The boot is regularly shaped and of a fair size and under the floor you'll find a space saver and essential tools. There's also a load-through hatch.

The folding rear seats are split 60:40 and increasing the cargo space is a quick and easy operation, and provides an extended and almost level load bay floor. The rear bumper is not too high off the ground so even loading heavy items is no hardship. What else can we say? It's straightforward and practical; it's a Golf.

On the move the stiffer sports suspension is firm; but it doesn't degrade the ride — unexpectedly, it serves to remind you of the R's built-in ability to combine performance-biased handling with a practical and liveable level of comfort. No mean feat. Overall the R is accurately described as TWF — taut, wieldy and feelsome; even on quite demanding roads it stays consistently assured and strong on ability.

But despite all that responsive power under the bonnet just itching to be put to good use and near-palpable grip from the chassis, cruising along on the motorway the R has a near-silent, mile-shrinking gait. And if you're using cruise control, there's a footrest either side of the footwell.

If you're harbouring the suspicion that four-wheel drive dulls handling sparkle, we're pleased to tell you that, at least in the R's case, that is most definitely not the case. In fact, the latest 4Motion system — front-wheel drive most of the time but which will, whenever appropriate, send as much as 100 per cent of the power to the rear wheels — appears to achieve the opposite, sharpening up the handling dynamics for a more direct feel.

Aided by new springs and dampers and revised anti-roll bars, and the clean and eager response from the specially-tuned power-steering, the R is a driving machine with a real appetite for corners (it devours straights just as delighfully!). Powerful and progressive brakes (hefty ventilated discs at each corner) ensure setting up for the twisty bits is as seamless as it is satisfying. Push the pedal hard and they have real stopping power.

As already mentioned, beneath the R's bonnet beats a turboed 266bhp four-pot powerplant. It's an effervescent unit that generates 258lb ft of torque between 2,500 and 5,000rpm; give it its head and it feels unburstable — a real cracker.

It's also cleaner than the outgoing V6 that powered the R32: CO2 emissions are down and economy up — with the twin-clutch DSG transmission, the R emits 195g/km and averages 33.6mpg. Our week-long test saw an average of 25.9mpg — no complaints about that given the level and the calibre of the performance. And if the DSG's Sport mode hadn't been so much fun we'd have easily matched VW's official 30+ figure.

Talking of the six-speed DSG (direct shift gearbox) automatic transmission, it delivers rapid-fire and incredibly seamless gearchanges even under full-bore acceleration. And with the flexibility from a turbocharged engine that's always eager to play, it makes for a highly enjoyable and sporty drive. Ideally, let the auto manage the mundane driving and save the Tiptronic paddle-shifts on the steering wheel's horizontal spokes for manual shifting to get the best out of the R as and when the occasion arises. And, believe us, it will.

The R is a very quick machine indeed, covering ground as rapidly as it does it effortlessly. It's also as content to potter around town in stop-start commuter traffic as it is to rip up the tarmac out on the open road. Impressively, whatever you ask of it, the R feels reassuringly poised and literally glued to the road. And, just because it goes like a bat out of hell doesn't mean it has to shout it from the rooftops. If you favour a deeply satisfying but under-the-radar drive, you'll find the Golf R is just the ticket. — MotorBar