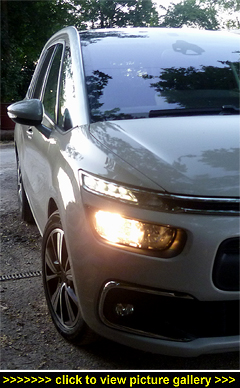 “You need seven seats. You don’t
want a SUV. Who do you call?
Why Citroen, of course. Their freshly
minted Grand C4 SpaceTourer
does it all — and with inimitable
French chic...”

TRUST THE FRENCH to find a way to make a big box look truly appealing. Leading from the nose with its sharp styling and distinctive three-tiered lighting and two-tiered grille, the Grand SpaceTourer caps its athletic flanks with a long and elegant glasshouse. The tail is equally standout, defined by smart 3D-effect rear light clusters.

Not only does this Gallic MPV manage to look seductive, but it proves that stylish alternatives to large SUVs — that maximise space even more efficiently — do actually exist. Prices for the Grand seven-seater start at Ł23,495 and run up to Ł32K.

For far too long seven-seat MPVs were, let's be honest, 'boxy'. Too boxy by far. Then some carmakers started adding an extra pair of seats in the back of their SUVs and suddenly MPVs were out in the cold. Citroen's 5+2 Grand C4 SpaceTourer has, at a stroke (and helped by an injection of clever interior packaging) brought MPVs back onto the wish lists.

Not only does it look smart on the outside but it's a discipline that continues throughout the interior. Along with a fabulously airy cabin there's a satisfying upmarket ambiance that majors on design — but not at the expense of practicality.

Rather scrumptious two-tone blue-and-grey cloth armchair-style front seats, both with massage function and adjustable captain's-style inner armrests, invite you to get well and truly comfortable. There's loads of inner space including extremely generous headroom and a fine driving position made even better by the panoramic front windscreen that comes with a powered sliding top-section blind — not that you'll want to return it to 'normal' mode as the view really is invigorating.

The tactile two-tone soft-touch fascia treatment is delightfully clean and unlike most cars there's no instrument cluster directly ahead of the driver but instead two central screens that work perfectly; we especially liked the zoomed-in map detailing at tricky junctions and the large digital speed readout with, next to it, the posted speed limit. The steering wheel is a modish four-spoker with a flat-bottomed rim wrapped in tactile smooth leather and four clearly zoned multifunction remote controls to ensure your hands rarely need to leave the wheel.

Along with an auto electric parking brake, and freeing up more space between the driver and front passenger is the autobox's easy to reach selector lever; actually a nifty upright wand sited behind the wheel at two o'clock — it's foolproof and pleasant to use and a jolly good idea! There are also paddle-shifters for manually overriding the eight-speed automatic transmission.

All of this is great news for ergonomics and functionality and makes for a very laid-back and stress-busting driving experience. The central twin-screen arrangement is easy to operate and works wonderfully well thanks to foolproof menus — the upper 12-inch panoramic HD display is easily personalised to show primary driving information including driving aids as well as 3D mapping in a larger and easier-to-read format. The lower smartphone-look 7-inch touchscreen is for controlling all primary vehicle functions including the automatic dual-zone automatic AirCon.

Using your fingertip you can also instantly access Citroen's Connect Nav that offers a range of real-time navigation features including route planning, traffic information and potential hazards, weather conditions, fuel prices and parking availability. While keeping you 'in touch', Connect Nav can also audibly read your emails and text messages.

Wherever you roam in your SpaceTourer you'll be comprehensively connected 24/7 and able to use your smartphone apps via Apple CarPlay, Android Auto and MirrorLink. Citroen's Connect Box emergency and assistance system along with Bluetooth handsfree with media streaming, DAB, and RDS radio and six speakers round off the media features.

There's also plenty of room for your personal stuff — a biggish glovebox, a capacious central storage box with a sliding lid supplemented by another large cubby at the base of the centre stack, storage drawers under both the driver and front passenger seats, usable front door bins with bottle holders plus a rear underfloor storage locker in the second row.

Even the mid-range Feel trim gives you plenty of kit for you're your money. Apart what's mentioned in the relevant sections, there's all the by-now expected engine start button, one-touch front and rear windows, electrically heated and folding door mirrors, front and rear parking sensors, dark tinted side windows and rear windscreen and a set of 17-inch alloy wheels.

The Grand C4's 2-3-2 seat configuration is the most effective way of transporting seven peeps. Its class-leading wheelbase makes maximum use of every inch, as too do the three separate full-size middle-row seats that can be slid fore/aft to customise individual seating arrangements or maximise luggage space when carrying five adults. The also come with adjustable recline angles. With a totally flat floor there's loads of room for feet — and generous space for knees and legs and, most importantly, heads.

And you don't need a sunroof to lighten up the rear cabin because a lot of extra light floods in from that panoramic windscreen, making it a place you'll want to travel in.

Parents will be pleased to know that three (not the usual two) rear child seats can be fitted while one and all will appreciate the dedicated second-row A/C controls and vents. Picnic trays with built-in cupholders and net magazine pouches boost the convenience factor.

Seats 6 and 7 are bigger than you might think and, while youngsters are the odds-on favourites to sit there, grown-ups can ride there too. The large back doors make for easy access; not just to the centre-row but to the third-row as well.

Despite what governments like to tell us, diesels are still a strong favourite with buyers who value them for their torque. The flagship powerplant is the muscular yet still fairly frugal (official Combined Cycle figure of 60.1mpg) 2.0-litre turbodiesel that comes mated to a sophisticated new eight-speed torque converter automatic gearbox.

It's a refined performer and matches the cabin's relaxed character. It also has more than enough grunt (295lb ft) to cope when the Grand is running at maximum load capacity (bodies or baggage). Acceleration is crisp and it makes a happy partner with the slick-shifting autobox. If you want more immediacy, your fingertips can pull back on the paddle-shifters close to the wheel rim any time you want to 'go manual'.

Like the comfort-oriented C4 Cactus we drove the other week, the Grand C4 equally feels like a home-from-home to travel in. In the nicest possible way you seem to 'float' over the worst blacktop, relaxed in comfy seats and distanced from the frenzied world outside the restful cabin. The driver's job is made even easier by the panoramic screen and commanding driving position — the Grand C4 is a breeze to place; on the move it benefits from responsive steering and decent body control.

Raise the big, wide tailgate and you'll discover that there's more to this Grand SpaceTourer than meets the eye — a regular-shaped 793-litre boot to fill with whatever you like. Of course that's with seats six and seven neatly folded away under the floor. But even when they're in use, there's still a handy 165 litres for bags and the like.

Temporarily jettison all but your front passenger and drop the seats and you'll have the use of a van-like, completely flat-floored, 2,181-litre loadbay. Boosting versatility is a front passenger seat that folds flat to facilitate carrying items up to 2.5 metres in length and the fact that the three centre-row seats fold can be folded independently of each other, making multi-format arrangements that mix people and cargo über easy. Finally a 1,600kg braked towing ability is not to be sniffed at and a nice touch is the rechargeable boot light-cum-torch.

Going French is the way to go if you value space and refinement. You'll also enjoy some classy design with plenty of usable but not overpowering high-tech. So if you're tired of l'auto ordinaire and are looking for something with character, charisma and seven seats, Citroen's SpaceTourer could be more than just a Grand gesture. ~ MotorBar