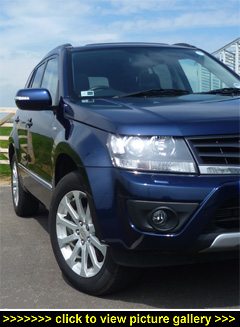 “Suzuki’s popular compact 4x4,
the Grand Vitara, has recently been
refreshed. Nothing major; just a
mix of tweaks and improvements
that together make it even more
likeable...”

MOST NOTICEABLE of these is the fitment of a spare wheel on the side-hinged rear door — essential for a go-anywhere 4WD vehicle. At the other end of the Vitara, the nose has come in for a facelift, while from the sides the new design 18-inch alloy wheels add some extra sparkle.

Good news so far as running costs go is the 1.9-litre engine's reduction in CO2. Okay, 3g/km less emissions doesn't sound that Earth-saving but its enough to trigger a drop to the next lower road tax bracket, bringing the annual road tax down to Ł275 (and Ł195 for the second and subsequent years).

Other upgrades for the top-spec diesel model include a 6.1-inch colour touchscreen for the Garmin SatNav that brings with it welcome downloadable updates and content alongside, for those of you who like holidays involving driving on the 'wrong' side of the road, in-depth European mapping. Bon chance!

As is now widespread, the SatNav is incorporated into an infotainment system which itself offers a full set of audio features: radio, CD, SD card, iPod & iPhone and the like, as well as Bluetooth for mobile connectivity and music streaming.

Going by the paper figures you could think the 123bhp Vitara is on the slow-ish side. Not so — while it clocks the 0-62mph time in 13.2 seconds, it feels much brisker. For that you have the torquey four-cylinder 1.9 turbodiesel to thank or, more precisely, its 221lb ft of torque.

On tap just where it does most good — from 1,750-2,500 — it provides gutsy pulling power at low to medium speeds. Use the smooth-shifting five-speed manual gearbox (auto is not an option on the diesel units, only on the petrol-engined versions) and you'll find 50+mph comes up quicker than expected, so watch out for those deceptive 40mph sections Big Brother likes to slot into long 50mph stretches. At 106mph the top speed is still high enough to lose you your licence.

Of greater interest to 4x4 buyers is the real-world fuel consumption — officially averaging 42.8mpg, on test the Grand Vitara returned 37.1mpg. A figure most owners will be pleased with given that beneath the tough built-in chassis is an intelligent full-time four-wheel drive system.

It's this 'proper' 4x4 feature that has helped make the Grand Vitara a common sight in some of the world's harshest terrain. In the less demanding UK it still provides peace-of-mind when our capricious climate manages to turn our roads into a country-wide skating rink during the winter months.

The Vitara's permanent all-wheel drive set-up is about as undemanding of a driver as you can get: the system is always running in 4x4 mode so unexpected weather hazards (for instance, rounding a bend to find a flooded road) don't wrong-foot it. So without the driver ever having to think about it, grip is always as good as it can be.

Unlike a number of part-time 4x4s, the Vitara's off-road ability is the real deal. In the rough the driver has the added security of two more modes. Using the rotary switch on the fascia, the system can be shifted from the everyday 4x4 High range (where power is split 47 to the front: 53 to the rear) to 4H Lock (with the centre differential locked for maximum traction in deep snow or mud).

Or, for optimised low-speed grip when tackling seriously tricky stuff such as controlled descents down slippery slopes or getting to the top of steep snow-dusted tracks, there's 4L (Low ratio, also with the centre diff locked in). And even running on standard road tyres, the Vitara is pretty tenacious off-road.

Additionally, the hefty torque combined with the availability of both high and low gear permanent four-wheel traction means towing boats, caravans, trailers and the like (up to 2,000kg braked) is a no-sweat op.

Another much-appreciated feature is its mix of a compact footprint with the ability to easily seat and transport four/five adults in comfort.

And it's the perfect hostess, with a well kitted-out cabin — for under Ł24K you get black leather upholstery, heated front seats, AirCon, power windows and electrically-adjustable and heated door mirrors, drive-off auto-locking, cruise, keyless entry and start, a comprehensive set of comms and music features plus a navigation system, tinted glass (with privacy glass from the B-pillar back), a 60:40 split folding rear seat, HID projector headlamps with washers plus, of course, driver, front passenger, curtain and side airbags and an electronic stability program.

The well-bolstered leather seats are large and accommodating and you sit high off the floor, which is very good news for your lower leg comfort on long journeys. The front footwells are spacious so driving in boots — hiking, work, even kinky! — is not a problem. The multifunction wheel (audio on the left spoke; cruise on the right) is leather wrapped and feels good in your hands. Height adjustable belts, a sliding front centre armrest that doesn't cramp the trad handbrake and the very quick to warm heated seat all add to the comfort of the fine driving position.

As too does the large tilt 'n' slide glass sunroof with one-shot operation. An inner sunblind keeps the rays off, if you're a cool kind of cookie. The controls are logically laid out: once used, never forgotten. Large buttons provide non-distracting control of the AirCon; every-which-way 'eyeball' outer fascia air vents sensibly ensure chilled (or hot) air reaches its target.

Also making life undemanding for the driver is the touchscreen SatNav — it's one of the better systems with clear 3D mapping and timely spoken directions. If you like your sounds, you'll also appreciate the Suzuki's 5-speaker/2-tweeter set-up. Plus there's loads of real-world storage throughout the interior so keeping the cabin tidy and organised is a breeze.

Access, via four big doors, is easy and they all shut with a reassuringly solid 'thunk'. Climb into the rear compartment and, just as in the front, you'll find loads of room in all directions. Headroom is fine even for taller adults and the rear seatbacks are multi-adjustable (going from upright to semi-reclined) so each side can set the best angle for max comfort.

A 'to share'-sized centre armrest boosts the comfort for two sprawling passengers, while a minimal central tunnel means a third adult can sit comfortably in the middle without any squeezing. Travelling in the Grand Vitara is made even more appealing, wherever you choose to sit, by the deep glasshouse and airy cabin.

Swing open the large full-width rear door — it's hinged, helpfully for the UK, on the offside — and you can access the deep, regular-shaped 398-litre boot. Below the lift-up boot floor is a shallow storage box for items you'd prefer to keep out of sight. Fold and tumble the rear seats and you'll end up with a handy 758 litres. And a flat floor of approximately four feet long by forty inches wide for your cargo to sit on.

Because they can tackle rough off-road conditions, people usually associate 4x4s with a harsh ride. Not true of the Vitara. On tarmac it rides a little on the firm side but thanks to the well-padded seats it's as comfortable as any saloon or hatchback.

Of course you'll be aware of potholes; but not in a negative teeth-jarring way — the dual-usage suspension gets the chunky 225/60 Dunlop tyres and 18-inch alloys across with minimal disruption. The Vitara also sits 190mm above the ground, which also gives it an edge where holes and hillocks are concerned.

Handling-wise it's more than up to scratch. On metalled roads the Vitara's direct steering adds to its composed car-like manner. It also holds its line and is stable enough for you to get your skates on when on pressing on through the gears. Braking, courtesy of discs all round, is drama-free — and it's just as reassuring off-road. Plus it's quiet and peaceful at speed. Does it all, really.

Against? Not that it's a problem, but a sixth gear would 'relax' driving at the legal limit even more. That noted, five's fine. If you need it to be, the good-looking Grand Vitara can be a versatile workhorse; equally it's very well qualified for city, commuting, family and any other duties you might want to throw at it. And sure-footed in all weather on — and off — all roads. — MotorBar