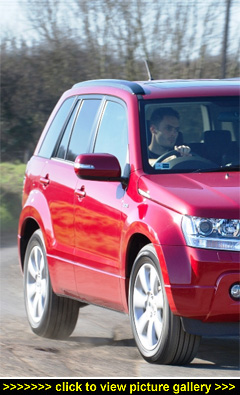 “Not just a compact SUV but also
a proper off-roader with permanent
four-wheel drive and high and low
gear ratios, the Suzuki Grand Vitara
can now be ordered with either four
wheels... or five!”

THE VITARA IS AVAILABLE in three- and five-door bodystyles, with both lengths now badged 'Grand Vitara'. As part of the latest specification changes, Suzuki removed the rear-mounted spare wheel in order to reduce weight (and lower CO2 emissions) as well as to improve visibility through the rear window.

However, some long-standing as well as new customers didn't approve — after all, the Grand Vitara is not just a compact SUV but also a proper off-roader.

And an off-roader without a spare wheel could see you 'up a creek without a paddle'. Some 'soft' SUVs have run-flat tyres although these generally unsettle the on-road ride quality. And, obviously, driving off-road can be pretty rough on your rubber — sharp stones or rocks are always waiting to split your tyre walls.

And if that happens, the now quite ubiquitous 'tyre inflation kit' (a tube of sealant and an electric inflation pump) found in most modern cars won't get you mobile again — and you just try getting the roadside rescue services to recover your off-roader from a muddy farm track or field.

Commendably, Suzuki GB have responded quickly to customer feedback on this issue and will soon be adding a five-door with a spare wheel mounted back on the rear door — the SZT. This uses the most popular 127bhp 1.9-litre DDiS diesel engine. Initially 500 will be available in the UK, priced at Ł22,315.

Depending on the choice of engine (127bhp 1.9 turbodiesel, 105bhp 1.6/166bhp 2.4 petrol) and bodystyle there are currently three trim levels: SZ3, SZ4 and SZ5 (only available on the range-topping 1.9 DDiS diesel). The limited edition diesel-powered SZT with the rear-mounted spare will be introduced early in 2012.

All Vitaras feature permanent four-wheel drive but 2.4 petrol and 1.9 diesel models add 4H high range (for a 47:53 front-to-rear torque split), 4H Lock (high range with the centre diff locked for equal torque between the axles to give optimum traction in deep snow and mud), and 4L — low range for maximum low-down power with equal torque split between the front and rear wheels (ideal for serious off-road driving).

An additional 'N' position frees the centre differential allowing for less risk of damage to the driveline if the vehicle needs to be towed. All of these settings are selected in an instant via the easy to use rotary switch on the fascia. A five-speed manual gearbox is standard fit.

The most recent changes to the Grand Vitara models saw specification upgrades, some minor visual changes, and the addition of an electronic stability programme; the 2.4 petrol engine also gained balancer shafts (for smoother performance and lower noise levels) and more power and torque.

In poor on-road driving conditions, as well as off-road, the Grand Vitara is a much more accomplished compact SUV than the modern-generation crossovers that dominate this section of the market.

It's a genuine 4x4 (thanks to its all-wheel drive system with high and low ratio gearing and strong ladder frame chassis) that can go more or less anywhere. And it will not bust the bank to buy it. The 31.8mpg road test fuel consumption (which fell 10mpg short of the official figure) and the high road tax, was not so impressive.

The 1.9-litre DDiS turbodiesel is no powerhouse but it gets the job done well enough thanks to 221lb ft of torque: it's responsive in the low to mid ranges without the need for frequent downchanges, which is just as well because the gearchange action is on the heavy side (and on my test vehicle a tad notchy when the unit was cold). Top speed, for non-UK roads, is 106mph but on British motorways that's fine because 70mph is more than easily maintained. Zero to 62mph takes 13.2 seconds.

The latest Grand Vitara retains its medium-sized 4x4 image — and it looks good. It drives well enough for most people, the steering is sharp and responsive, the handling predictable and it's roomy: you get 398 to 1,386 litres of load space. And you can tow a braked 2,000kg.

The ride comfort is not as good as that of the modern car-derived crossovers and neither is the out-and-out performance, fuel economy or running costs. So, as with all 4x4s, owning one is always going to be a compromise. Do you buy a tough, durable 4x4 capable of withstanding our poor road surfaces, coping better in Winter weather plus dealing with off-road travel without stress? Or do you go for a 'soft' SUV where style and comfort matters more?

As a country-dweller I wouldn't hesitate to choose the tool most suitable for the job — the proper 4x4. Exactly what I did for the Christmas and New Year holiday period. With places to go, people to see, work to do and with the threat of wind, rain and snow, not to mention potholed roads, the Grand Vitara, even without a spare wheel, fitted the requirements more or less perfectly.

On top of that, the diesel-powered SZ5's standard kit is pretty comprehensive, including, as it does, leather upholstery, heated front seats, AirCon, on-board computer, power front and rear windows, electrically-operated door mirrors and alloy wheels.

Against? No spare wheel (but only until the SZT version arrives), expensive to run in terms of road tax, the 1.9-litre diesel engine looses out on performance against the more commonplace in this sector 2.0-2.2-litre engines, and no auto transmission option.

However, there are lots of reasons to buy including its genuine go-anywhere ability, high and low ratio 4WD system and rugged construction. You also get sharp steering response and decent handling, plus a well-equipped cabin and smart styling.

The absence of a spare wheel would probably stop me buying one (although that's about to be rectified any time soon) but in all other respects the five-door Grand Vitara 1.9 DDiS SZ5 was just 'grand'. — David Miles