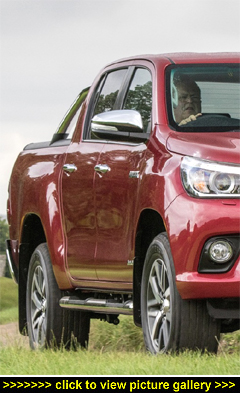 “With more than 18 million sold
world-wide, Toyota’s Hilux has
been the mainstay of the global
pick-up market for almost 50 years.
And things are only going to get
better when the all-new, eighth
generation Hilux pick-ups arrive
this month...”

With tax advantages for business users, they also appeal to customers who need dual-role vehicles for business as a workhorse as well as providing stylish family transport.

The increased demand for pick-ups (and Double Cab models in particular) has fuelled the arrival of additional new or heavily revised existing models. Leading the way for UK sales so far this year is the revised Ford Ranger followed by the all-new Nissan Navara, the revised Mitsubishi L200, Isuzu D-Max, Toyota Hilux, VW Amarok, the new Fiat Fullback (based on the Mitsubishi L200), the Great Wall Steed and SsangYong's Korando Sports. Renault too will launch a pick-up range (based on the Navara, from their partnership with Nissan) and Mercedes-Benz and Skoda are also expected to launch their own Double Cab ranges shortly.

Before quoting prices for the new generation Hilux range, an explanation is needed on how these vehicles incur taxes. Pick-ups of all types are classed as Light Commercial Vehicles and that governs their on-the-road price, road tax and, if applicable, company car tax. Retail private buyers will pay VAT; businesses will not.

Road tax is a standard Ł225 per year, whatever the CO2 emissions. Depending on the specification, Benefit-in-Kind company car tax is generally around Ł630 per year for the standard rate income tax payer, and double that for a higher rate customer.

New Hilux on-the-road prices, not including VAT, start at Ł19,177 for the Active specification Single Cab and rise to Ł29,435 for the Invincible X Double Cab automatic. VAT-inclusive retail prices range from Ł22,955 to Ł35,265.

All versions are powered by a new 147bhp 2.4-litre D-4D turbodiesel engine driving though six-speed manual or automatic transmissions, all with 4WD. And all models are covered by a new five-year, 100,000-mile warranty. The expected best-seller will be the Invincible Double Cab automatic costing retail customers Ł31,350.

Now we've got all of that out of the way we can focus on the Hilux itself — it's longer, wider and lower than previous versions, with an increased towing capacity of 3,500kg from the end of this year although currently it is only homologated at 3,200kg.

The Double Cab's payload is 1,055kg. Below decks there's a new, stronger and 20% torsionally stiffer ladder frame chassis to help the tougher cargo bay shrug off heavy-duty use. The rear suspension has also been revised for a more compliant and comfortable ride although it still retains its leaf-spring set-up for durability.

The exterior design still retains that upright, hard-wearing workhorse image although the styling lines have been softened to appeal to owners who in the past might have opted for a more shapely SUV. The 18-inch alloy wheels and other brightwork finishes on the top-spec models add significantly to the Hilux's improved kerb appeal.

Inside there's more room, particularly in the rear where three passengers have ample leg and headroom. Sited centrally in the high level fascia is a tablet-style information screen that operates various functions including the Toyota Touch 2 with Go SatNav and connectivity system. Electric front windows and AirCon are standard fit, as too is cruise control.

The 2.4-litre, 147bhp four-pot turbodiesel engine is also new and it produces significantly more torque than the outgoing 2.5 and 3.0-litre diesel units — up from 252 to 295lb ft and all delivered from just 1,600rpm.

Both the six-speed manual and automatic gearboxes have been revised for smoother use, with slick gearchanges, and the transmission is upgraded to support the engine's higher torque output. All UK versions have a high- and low-ratio transfer box offering on-demand 2WD High, 4WD High and 4WD Low ratios.

On the roads around The Chilterns, in generally soaking wet conditions, the Hilux handled predictably although care needs to be taken during cornering on wet roads as rear-end grip in 2WD can be skittish, as it is with most unladen pick-ups using rear leaf springs. Although the back suspension has been changed, with longer rear springs to soften the ride without reducing the durability, it terms of ride comfort it cannot match the conventional coil spring rear suspensions used on SUVs and the new Nissan Navara Double Cab.

Although stronger with a new ladder frame chassis and strengthened loadbay, the lighter weight new Hilux felt much more agile. With improved steering response, the roadholding was generally trustworthy on winding roads, and more car-like to drive than before.

In town the Hilux was SUV-like, and its increased size didn't cause any issues either in busy traffic or when parking — unlike the new heavyweight Nissan Navara Double Cab which in the same conditions feels huge and ponderous.

Off-road on steep, muddy forestry tracks of the severity that would test the likes of a Land Rover, the new Hilux made light work of negotiating tough terrain, including fording a river. But then it does have all-wheel drive traction, enhanced by electronics such as Hill Descent Control.

The lighter weight of the new vehicle also benefits the performance: with 147bhp and 295lb ft of torque from 1,600rpm, the acceleration response from low to medium speeds was willing and better than the official performance figures suggest. Top speed is a modest 106mph and zero to 62mph is just as modest, taking 12.8 seconds.

However, the Combined Cycle fuel consumption figures look better, with an official 36.2mpg for the automatic transmission. My test drive returned a real-life figure of 34.6mpg and a brief drive in a six-speed manual version saw 36.9mpg against a 40.4mpg official figure. The auto model has CO2 emissions of 204g/km (185g/km with a manual 'box) and road tax is Ł225 each and every year.

Overall the World's most famous and best-selling pick-up has certainly been improved in all areas. It will appeal to those who need to use their work vehicle for family life, and with the recent demise of the Land Rover Defender this latest Toyota Double Cab makes a very credible replacement. ~ David Miles