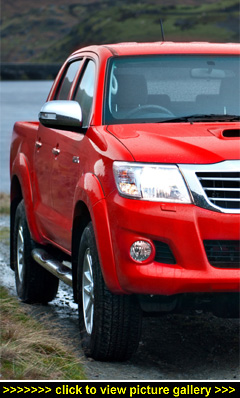 “Just announced as Total 4x4
magazine’s Pick-Up of the Year,
Toyota’s 2012 HiLux delivers
on all fronts — work and play...

In January 2012 Ford will debut their all-new Ranger and the traditional best-sellers, such as the Mitsubishi L200, Nissan Navara and Isuzu Rodeo/Denver, will all receive yearly changes. However, Toyota is the first out of the box — its 2012 model has been on sale since before the closing days of 2011.

The HiLux, already available with its 2012 updates, is one of the major players in the growing pick-up market here in the UK. In 2011 Toyota sold 6,336 Double Cab versions plus 362 Extra Cab (cab-and-a-half) models and 562 Single Cabs. The range offers two turbodiesel engine options: a 2.5 and a 3.0-litre.

A rugged, easy-to-maintain workhorse that appeals in all markets, the HiLux is the best-selling pick-up range in Europe (if not quite the market leader for sales in the UK). To date, in excess of 13 million of these 'go anywhere in all conditions' HiLux models have been sold worldwide.

So who buys them? Just about everyone, it would seem: active families, contractors, farmers, one-man building firms, exhibition organisers, Police, Fire and Rescue services and the Airport authorities — all use these types of 2WD and 4WD pick-ups.

Although not something that will concern too many farmers or builders, the revised 2012 styling smartens up the HiLux and will be appreciated by white collar businesses and recreational and lifestyle users for whom driving a smart 'butch' 4x4 is a major plus.

The comprehensive re-style, from the A-pillar forwards, provides a new bonnet, radiator grille, headlamps and bumper. There are also new design alloy wheels on the HL3 (15-inch) and Invincible (17-inch) as well as new side bars and steps for the top-of-the-range HiLux Invincible.

At the tail, the rear lamps now have clear indicator lenses enhanced by a silver trim band. The high-mounted stop light also gains a clear lens. And all models now feature a rear step-bumper; Invincible models add side steps in addition to their chrome side bars for easier access to the cabin.

Unlike the sportier looking Mitsubishi L200 with its swept back front-end, the HiLux retains its traditional upright stance and is easily identified by its trapezoid front grille and three-bar bonnet air scoop and, on HL3 and Invincible models, recessed circular front fog lamps in the bumper.

This new sixth-generation HiLux is 'one size up' from the previous model. Not only does this mean more road presence and more interior space, but the load deck has also increased — it now has 25% more capacity.

Load lengths are 1,545mm for the Double Cab, 1,830mm for the Extra Cab and 2,340mm for the Single Cab. With 1,100mm between wheelarches, the load deck of the HiLux can accommodate that all-important 'Euro pallet'. Plus the payload for the Double Cab version ranges from 1,045 to 1,060kgs making it a true 'one-tonne' load carrier regardless of whether the load is for work or play.

Towing is another important function for double cabs, and all HiLux models have an impressive braked towing capacity of 2,500kg.

Depending on the body style and engine choice, there are three levels of trim and equipment: HL2, HL3 and Invincible.

The HL3 trim is more about business and lifestyle family use, so the upholstery is of a higher grade, the fascia coverings look and feel much more expensive and the additional and new instruments now look straight out of a SUV rather than a commercial vehicle.

The new upper dashboard and horizontal instrument cluster emphasise the breadth and roominess of the cabin and incorporates Toyota's multimedia unit with a full-colour 6.1-inch touchscreen.

This incorporates a radio/CD player with MP3/WMA digital play, Bluetooth hands-free 'phone operation, audio streaming, automatic phonebook download, USB port for MP3/iPod connectivity and a rear-view camera. As to the rear-view camera, during my test drive in our wintry weather I found it did not clearly show obstacles and with no guide lines to measure the distance from another vehicle or a wall, I'd rather have front and rear parking sensors.

The HiLux sits on a durable ladder-frame chassis with independent double wishbone front suspension and strong leaf springs and dampers at the rear. A rear differential lock is standard fit on 2.5-litre versions and there's selectable on-the-fly two- or four-wheel drive and a four-wheel drive low ratio transmission. All 2.5-litre versions have a five-speed manual 'box; the 3.0-litre is available with either the five-speederl or an automatic transmission.

Yet another significant improvement is the HiLux's ride quality. Traditionally leaf rear springs have been used, and these are notorious for the really hard and uncompromising ride they give.

But Toyota has conquered that problem somewhat: the ride is now more comfortable and compliant even at those times when a pick-up is at its worst — being driven with no weight in the back. But even then the new HiLux keeps planted on the road.

Even so, unladen the rear-end grip can be an issue and it was easy to spin the wheels moving off on damp roads. With ice and wet roads prevailing during my test week, 'my' HiLux was mainly used in H4 (high ratio 4x4).

Overall fuel consumption, without any off-roading (I know from experience that it's inherently good) was 30mpg; down on the official Combined Cycle's 38.7mpg.

The common-rail 142bhp 2.5-litre and 169bhp 3.0 D-4D four-cylinder turbodiesel engines have been re-engineered to meet Euro 5 emissions standards and, at the same time, fuel efficiency and CO2 emissions have been improved.

The HiLux's 2.5 turbodiesel unit is strong with obligingly good torque of 253lb ft from 1,600rpm and proved very flexible in town or on winding country roads. It doesn't have the same pace as a soft SUV off-roader — top speed is 106mph with zero to 62mph taking 13.3 seconds.

However, in tough off road conditions, towing on- or off-road and with loads to be carried in mud, ice and snow, it's a viable alternative to a conventional 4x4.

Against? Skittish rear-end grip on wet roads in 2WD, rear reversing camera more or less useless in bad weather with no guide or 'distance away' lines; parking sensors would be more practical. And the long gearlever looks and feels as if it comes from a lorry — it needs to be two to three inches shorter.

Good reasons to buy include the HiLux's worldwide reputation for strength, durability and reliability and the 2012 updates improve the interior specification, the ride comfort and clean up engine emissions. — David Miles