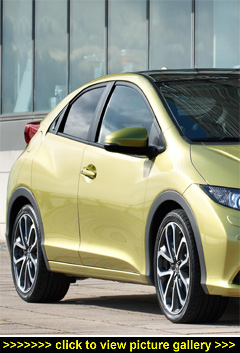 “Honda’s new Civic five-door hatch-
back is likely to become their best-
seller. Like the previous generation,
it’s available with the option of the
1.4 or 1.8-litre petrol engine —
alternatively you can have a 2.2-litre
diesel engine...”

CURRENTLY THE NEW CIVIC has a 50:50 sales split in the UK between retail and business users with just over half (56%) of buyers going for the petrol engine — mostly because, in this segment, the 2.2-litre diesel engine is too large a capacity. However, a new, and less costly to buy, low-CO2 emission 1.6-litre diesel unit will be added to the range next year (2013).

Introducing a smaller 1.6-litre capacity diesel should also increase the demand from user-chooser business customers, which in turn will push up the current 22,000 annual sales total for Civic in the UK to make it Honda's best-seller.

This new ninth-generation Civic follows the same futuristic styling theme of the radical — for Honda — model launched to great media acclaim in 2006.

The only trouble was its sharp angular 'stealth' styling soon became dated. The modern interpretation is far more refined; smoother, less radical and more acceptable for the long-term future of this generation.

And there's no mistaking this new Civic for anything else — it remains distinctive, but more appealing with smoother body lines. Basically it is an evolution of the outgoing model and, thanks to improved engines, offers better fuel economy and lower CO2 emissions.

I briefly tried the new, shall we say 'evolved', Civic with the 1.8-litre petrol engine which produces 140bhp of power at 6,600rpm and 128lb ft of torque at 4,300rpm — a traditional high-revving Honda petrol engine design. The unit needs to be kept spinning to get the best mid-range response out of it otherwise it's a trip down the six-speed manual gearbox to get back into the powerband.

With some motorway use, stop-go town traffic and a few miles on country roads, I came to within a mile of that, achieving a first class 46.5mpg. Emissions are 143g/km so the road tax is Ł135 a year. Company car tax is 19%. And insurance is five bands lower than the outgoing version with this engine and spec (the new level is 16E) which is significant for cheaper running costs.

The problem for Honda is that other mainstream car-makers have introduced smaller capacity, direct injection petrol-engined models — Ford's Focus Ecoboost and VW's Golf 1.4 TSI — with low pressure turbochargers that make them frugal on fuel, cleaner for CO2 emissions and more responsive from low- to mid-range speeds. Against these the Honda 1.8-litre petrol engine is fine; it will be reliable — but it doesn't set new standards.

The same could be said about the new Civic overall: it has certainly improved; it has, in most areas, caught up with the competition — but it doesn't lead the way.

The ride comfort is also better although the suspension is still set on the firm side for our troublesome UK road surfaces.

The interior quality looks and feels smarter as well, and the specification is better and you'll find it's equipped with all the usual items needed: from electrically-operated windows and door mirrors to AirCon, a high level of safety equipment and alloy wheels.

The rear visibility is still its worst feature even though a tailgate wiper has now been fitted to the split rear window, and the coupe-style roofline limits rear headroom.

It's a good try but to get ahead of the game it's a 'must try harder' report if the Honda Civic is to make significant inroads into the C-segment which is already awash with new models and discounted prices.

On the positive side, the new Civic is really versatile, either as a five-seater with a large 477-litre boot or an excellent and cavernous carry-all with 1,378 litres. It's easy to see why people of all ages buy it: because it meets a multitude of motoring requirements. — David Miles