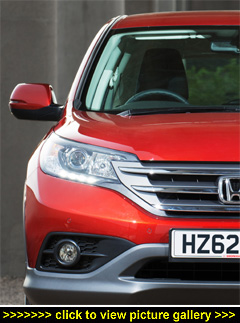 “Forget the Nissan Qashqai — it was
Honda that really got the ‘soft-roader’
market simmering. Honda’s CR-V
may never have cleaned up in the
marketplace like the Nissan (both
cars, incidentally, are built in Britain)
but it’s been a consistent front-
runner since the badge was conjured
up in 1997...”

NOW, AFTER MORE THAN FIVE MILLION have been sold worldwide (of which almost 200,000 have found homes in the UK), we're into the CR-V's fourth generation. Have things changed? Well, it's longer and lower than the last one, and arguably looks better. The well-defined wheel arches and pinched-in waistline look athletic, and the only angle I don't really like is the heavy rear three-quarters.

One difference that's always marked the CR-V out from its 'softer' rivals is that all generations so far have had 4x4 as standard. That's changing with the new one: it becomes the first CR-V to be offered in two-wheel drive (though only with the 2.0-litre petrol engine).

That makes the CR-V entry point cheaper (Ł21,395), although most buyers will continue to choose 4WD, especially as on snow and ice you'll look a bit of a plonker in a front-drive SUV that you can't get out of your own drive!

So I got behind the wheel of a 4x4 version of what will be the more popular engine, the 2.2-litre diesel. Although neither engine on offer (2.0 VTEC petrol and 2.2 i-DTEC diesel) are new, both have been tweaked for better efficiency.

The new CR-V is bigger and bulkier, weighing-in at 1,500kg. But the 148bhp diesel is still capable of hauling it to 62mph in under 10 seconds. It certainly feels lively on the road, too, and there's plenty of torque if you need to load it up to the gunwales or pull a trailer.

A new bit of kit on this fourth-generation CR-V is electronic power steering, which is not only better weighted than most other systems but communicates through the steering wheel reasonably well. Also in a different class to before is the ride/handling balance.

Body roll is well damped and there's no lack of grip through fast corners. And the damping is good enough that you never feel uncomfortable, even over rough surfaces. Hill Start Assist is standard, with Hill Descent Control providing hardcore off-roading ability should you need it.

The CR-V isn't the most economical choice on the market, though: the 2.2 diesel automatic averages a meagre 41.5mpg and emits 180g/km. You can now flip a button to enter a new Econ mode, which changes the throttle mapping for slightly better mpg.

Honda says that quality has been much improved with the new model. Certainly the materials inside the cabin are far better, if not yet at VW/Audi levels. The centre console also features a new five-inch multifunction display which works very well.

Practicality is much improved, too. The wider, airier cabin has lots of space for passengers and is peppered with cubby-holes and cup-holders. The boot is now much bigger (at 589 litres) and the load floor is lower.

Neat one-pull levers flip up the seat bases, fold the headrests and flatten the seat backs, liberating 1,648 litres of space and allowing you to stow a full-sized mountain bike.

Also handy is the standard powered tailgate, although the small rear window makes visibility a bit tricky — make sure your CR-V comes with parking sensors.

Safety is a strong suit for the CR-V, too, with a pile of airbags as standard and an emergency braking system that can help avoid or mitigate low-speed accidents (although it's an extra-cost option and only offered on the range-topping EX). Other safety gear includes Lane-Keep Assist to alert you if you drift out of lane, and Trailer Stability Assist to prevent fishtailing.

The range-topping EX has traditionally been the best-selling version in the UK, which isn't surprising given its great spec. Conversely, the base S version is definitely best avoided, as it has a pretty meagre spec list. — Chris Rees