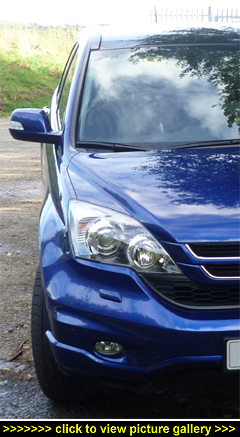 “Just on sale is the latest generation
of Honda’s CR-V. But before trying
the new, we decided it made sense
to review the outgoing model —
itself a fine example of Honda doing
what it does best...”

AND A WEEK WITH the superseded CR-V was no hardship at all. Honda's compact soft-roader crossover has long been a popular choice with many buyers not least because of it's 'just-right' size — neither too big nor too small — but also because of its very car-like handling and driving qualities.

Implicit in that last sentence is the ease with which it swings either way: pack in people and it's demonstrably more than fit for purpose; cram in cargo and it takes it easily in its stride. In fact, due to some unexpected 'removal duties', it showed itself to be an amazingly competent haulier of just about anything (of any size) that can be found inside the average home.

Helping enormously is the high-lifting (and lightweight) tailgate that opens up onto a low loadbay floor that makes it one of the most easy to load on the market — whether it's white goods, DIY building materials, or the plain old weekly shop. Adding to the usability is a two-tier shelf arrangement in the boot that effectively doubles up the overall capacity for carrying smaller items. Very simple. Very clever.

Leave the rear seatbacks in place and there's an accommodating 556 litres of space to the window line; fold and tumble the rear seats (one light pull on a single lever does the trick with no messing) and stow the double-decker shelf and the CR-V will accommodate 955 litres of cargo — and remember, this is not stacked to the roof but just to the window line so, unlike white van man, you can still see what's going on around you.

So, versatile for luggage — but how well does it manage people? Brilliantly, is how. For a so-called medium crossover there's one heck of a lot of roomy seating inside.

While you know that the CR-V would have started out as a two-box utilitarian bodyshell, it looks not the least like that either from outside or from the inside.

Interesting trims and finishes — all of a good quality — surround the shapely soft leather seats and add to the executive ambiance. Sit back in a front seat and you'll find it to be extremely supportive, the side bolstering perfectly judged and 'just right' from the moment of contact to however many miles later it is that you get out. Both front chairs, by the way, are captain's-style: each with its own well-padded drop-down inner armrest.

And the cabin is made all the more inviting by the light flooding in through the panoramic glass roof — if you're a creature of the night and prefer to keep 'the bright' at bay, simply press (and forget) the auto one-shot switch for the powered sunblind.

More good news: CR-V drivers can actually use their inner armrest as it doesn't block access to the handbrake or the selector lever. The handbrake itself is a wonderfully intriguing thing — a stylish fly-off kind with a sideways umbrella-type handle that fits your palm perfectly and which is incredibly easy and effortless to use, particularly on steep hills.

Talking of these special touches, all of which make the CR-V so personally user-friendly, here's another: a separate second glovebox (above the good-sized, lockable main one) features a bureau-style lid that opens upwards and slides back inside itself for easy access — plus there are plenty of nooks and cubbyholes dotted about the interior.

Visibility out is very good, aided, for the driver (who rides tall), by the large tailgate rear screen and real-world door mirrors. Further boosting the visibility score is a reversing camera which comes as part of the touchscreen SatNav system (helpfully it's supplemented by audible front corner and rear parking sensors plus a driver's door mirror that tilts whenever you engage reverse gear).

An auto-dimming rear-view mirror, clear dials, precise-action switchgear, 8-way power for the driver's seat (with electrically-adjustable lumbar support) and a wide left-foot rest wrap-up driver satisfaction. Height-adjustable belts are another 'must' both for optimum safety and comfort — you'll find them in the CR-V.

The steering wheel is a lovely, thick, leather-rimmed item (with controls for the audio, phone, multifunction driver's computer and cruise) while the transmission shift lever is close to hand thanks to its convenient location on the centre stack. Another nice touch: the SatNav directions are voiced in well-spoken English, with advance warnings well-timed.

Two more big 'plusses': wide opening doors (that open to almost 90 degrees) and seats set at a height that makes simply sliding in and out easy.

While front-seaters enjoy masses of space in all directions, there's absolutely no penalty for travelling in the back where there are no compromises with comfort (the CR-V is an unashamed five-seater, and all the better for it).

Head- and leg-room are generous, with ample room to park feet under the front seat. And depending on your priorities — packages or people — the rear outer seats slide fore and aft (about 6 inches), so no crowding. Plus, despite sitting higher than those in front, rear passengers also enjoy lots of headroom.

A big bonus are the split 40:20:40 backrests; the two outers tilt back all the way to a semi-reclining position. And while three side-by-side is no problem, two can share the well-padded centre armrest (itself almost as wide as a seat and with a pair of cup-holders built-in) for some serious R&R. Handy for skis or long loads is the large load-thru hatch (17 x 11 inches) behind the rear armrest.

One reason the CR-V is so well liked is that it's so agreeable to drive, whether you're doing the rush-hour drag-around-town or hoofing it through the country. Wherever it takes you, the CR-V keeps its cool.

Even on 18-inch alloys the ride is agreeably 'citified', the brakes spot-on and drama-free, and the steering sharp enough to corner ably. Overall it's a lot more nimble than you might have been expecting. And, at a smidgen over 4.5 metres long, it's not too bulky for the city.

Contributing to the driving smoothness is the CR-V's foolproof five-speed autobox; it's well-matched to the four-cylinder 2.2-litre diesel powerplant. Max power is 145bhp and that's accompanied by 258lb ft of torque at 2,000rpm — enough to whisk the CR-V along at a thoroughly decent pace: 0-62 in 10.6 seconds; 116mph top speed. Most notable is the low level of noise, even at higher cruising speeds.

One of the CR-V's smartest (and most appreciated) features is its automatic on-demand all-wheel drive system that calls for no human intervention: four-wheel drive engages at the very first inkling of any weakening of grip whether it's caused by rain, ice, mud, or snow.

To all intents and purposes, you just get in and drive and the grip takes care of itself. 'Soft' off-roading is definitely on the CR-V's agenda; just keep in mind that it's no Range Rover. Reassuring to know, too, that alongside the 4WD is an electronic stability system.

A week's hard-use saw our CR-V averaging 37.9mpg (impressively close to the official figure of 38.2mpg) over a wide mix of roads and traffic patterns — a figure that should satisfy most owners.

Whichever way you come at it, the CR-V ticks all the key boxes — and then some. It's bodyshell houses a first-class cabin whose versatility has clearly been seriously well considered. It's also a pleasure to drive for both very short trips and very long ones. All in all, it's a 'sure thing' purchase.

As you can imagine, press cars lead punishing lives yet ours, with almost 12,000 miles on the clock when it arrived, still looked like new inside and out which says a very great deal about the CR-V. — MotorBar