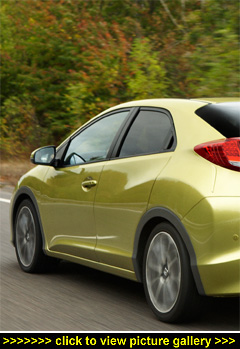 “Controversial sci-fi looks. Cold and
robotic. Don’t worry, that was the
just-replaced Honda Civic. And while
the new one’s looks are still in the
‘very brave’ category, softening the
blow somewhat is a very comfortable
ride...”

HAS ANY CAR gone through quite as many radical evolutions as the Civic? We've had nine generations so far, including the strange 'sporty' fifth-generation EG6 version in the early 1990s with that very odd split tailgate; the EP3 generation which looked like a boot but had a huge interior; then the most radical of all — the eighth-generation FN2 that's just gone out of production.

The just-replaced Civic's very controversial sci-fi look was, even Honda now admits, possibly a step too far. The company itself now describes the design as "cold and robotic". I think that's being a bit hard on yourself, Honda — it was always a very striking shape.

So what has Honda done for the new ninth-generation Civic? Despite it claiming to have pursued a less love/hate styling avenue, few people would deny that the new car remains in the 'very brave' category. Apparently Honda's stylists took inspiration from the shape of water droplets on leaves, experimental aeroplanes, and even swimsuits. Can you see it yet? No, neither can we…

The new Civic is bigger but lower: overall it's 10mm wider, 30mm longer and 20mm lower. As a result it looks squatter and quite coupe-like, especially as the rear door handles of the five-door bodyshell nestle — like the previous Civic's — in the rear window pillars. By the way, there will be no three-door Civic in this generation: Honda thinks its five-door shape has all the sportiness you could ask for.

The view of the rear is particularly striking. Gone are the old triangular exhaust pipes; but the third rear brake light doubles up as the rear spoiler in an even more dramatic way than on the last Civic. Also, the main rear light clusters, that stick out like 'ears', are claimed to bring significant aerodynamic benefits.

Speaking of aerodynamics, the new car is a lot more slippery than the previous model: indeed, with a Cd value of 0.27, it's the most aerodynamic car in its class. The diesel model even has a shutter on its grille which closes at certain speeds to make it more slippery.

So much for the design. How about what's under the bonnet? Most buyers will ignore the (rather underpowered) 98bhp 1.4 petrol. If you're interested in petrol power (as 60% of buyers will be), the 140bhp 1.8 petrol is much more interesting. I had a drive of the 1.8 and found it willing — but only if you rev it very hard. And if you do that, it becomes raucous and noisy.

No, it's the diesel that's the most interesting powerplant in the range, particularly as, for the last year, the Civic hasn't even been available with a diesel engine — a fairly extraordinary state of affairs for a mainstream family hatchback. The reason was, of course, the economics of getting the diesel through emissions regulations for a model that was effectively on run-out.

Honda desperately needs a strong diesel competitor in this class, and luckily it's got it. The new Civic uses the same 2.2-litre i-DTEC engine as the recently revised Accord, which is very good news for Honda. Why? Because it's a very efficient powerplant. If the claims are to be believed, the Civic diesel will return 67.3mpg and has a better CO2 emissions figure (110g/km) than the Golf TDI BlueMotion.

It also delivers surprisingly sprightly performance. With 148bhp, Honda claims 0-62mph in 8.5 seconds — reasonably rapid if not in the forefront of diesel performance territory.

This is also a fairly flexible engine, with peak torque of 258lb ft coming up at 2,000-2,750rpm. It's also not the most refined engine in its class — although it's never painfully loud, you can certainly hear it at all speeds.

You might want to avoid the GT version though. Strangely for a car with an apparently sporty badge, the GT's addition of 17-inch alloy wheels harms its acceleration (0-62mph: 8.8 seconds) and dents fuel economy and emissions (64.2mpg and 115g/km).

The new Civic's chassis is an evolution of the previous-generation Civic. The only part that's actually been kept unchanged is the rear subframe, but all the main elements — central fuel tank, MacPherson struts up front, torsion beam rear — have been retained and updated.

This car has been developed exclusively for Europe, with lots of testing in the UK. The result is a European-focused chassis, no question. It's certainly grippy, and in extremis the stability control works effectively to control slides. While the basics are all there, it doesn't feel as confident as a VW Golf or Ford Focus. The reason is that there's something in the steering that stops your full commitment to corners; a remoteness from what's happening on the tarmac, and a lack of feedback. If only the steering were sharper, this would be a very decent chassis.

One very definite area of improvement over the old car is the ride quality. New fluid-filled bushing helps give a ride that's actually very comfortable, even over quite rough roads. If you avoided the last Civic because of its harsh ride, you'll be very pleasantly surprised by the new one.

What about practicality? Honda says the new Civic offers class-leading space, and in one sense it does: you can get 401 litres of 'stuff' in the boot plus an extra 76 litres under the boot floor. Honda says that's 100 litres more than its closest rival.

Honda's unique 'Magic Seats' allow you to flip the seat bases up to stow tall items, or fold them up and forwards with the backs to create a flat load floor; do so and you'll have an amazing 1,378-litre cargo bay.

However, room in the rear cabin isn't as good as I'd expected — legroom can be tight if the driver is of above average height, and the low roofline can see your head start to touch the headlining if you're above about 5ft 8in tall.

Visibility was the previous Civic's Achilles' heel, and I regret to say it's this one's too. Honda has improved it slightly by lowering the split rear window bar, but it's still massively intrusive.

The new lower section is larger and made of glass (it was polycarbonate before), which means it can now have a heater element in it. Another novelty (!) is a rear screen wiper but the benefit of this is dubious since the motor sits in a sizeable housing in the middle bar. Other vision problems include huge C-pillars and awkwardly thick windscreen pillars.

The cabin retains the split-level fascia that made the previous Civic so distinctive. It's now been totally redesigned with the upper speedometer now further away and the gear lever (not now exposed) closer to the driver.

Again Honda is claiming big improvements in interior quality. That's true — the plastics are better and there are more highlights to catch your eye, but overall this is no VW Golf to sit inside as there are still too many low-rent items.

The production line for the new Civic remains at Honda's Swindon factory, but things are getting off to a tricky start because the floods in Thailand are affecting parts supplies. Dealers are taking orders, but the first deliveries won't now start until February 2012, a month later than planned.

I'll end with the question that's on every enthusiast's lips: will there be a new Civic Type R? Honda's official position is that "we are investigating the direction of a next generation Type R" with the intriguing postscript that it will "reflect the changing environmental demands of society". What exactly that means, Honda is remaining very tight-lipped about, but the good news is that the discussion about the Type R is definitely happening within Honda. However, don't expect a launch until mid-2013! — Chris Rees