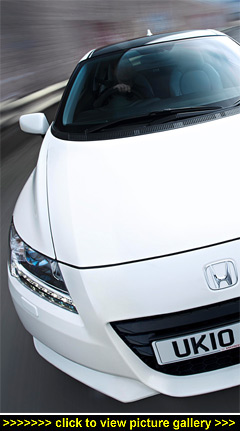 HONDA SAYS THE CR-Z COUPE is designed to be exciting to drive, great to look at and have a healthy respect for the environment — designed and engineered for modern, urban living. Honda anticipates around 3,500 UK sales for the sporty CR-Z Coupe in a full year (it went on sale in the UK on 5 June). Prices start at Ł16,999 and range up to Ł21,749 with four levels of trim and equipment — S, Sport, GT and GT Nav.

As the world's first sporty hybrid, the CR-Z's stylish looks stand out from other affordable 'green' cars on the market and it does offer improved driving dynamics thanks to an agile chassis, direct steering, a low driving position and useful boosts of torque from the petrol-electric drivetrain.

It will, of course, be most at home in urban environments but it is quite capable of coping with motorways and the countryside. Expect city and town dwellers to be the 'early adopters', especially Londoners, or commuters into the Capital, because as a hybrid it is currently exempt from the Congestion Charge — although this arrangement may soon change.

Whether the owner is a retail buyer wanting the latest technology wrapped up in a sporty looking bodyshell, the environmentally concerned driver or the business driver promoting their company's green credentials, the low 117g/km exhaust emissions mean cheaper road tax (Ł0 for the new VED First Year rate and then Ł30 a year thereafter). Company car users will also enjoy the 10 per cent Benefit-in-Kind tax levy.

The CR-Z uses a 1.5-litre petrol unit (taken from the American versions of Honda's Jazz) in conjunction with a manual gearbox — not a CVT auto option as with other hybrids. Honda says this is to give the new model a sportier driving feel as well as extra performance. Top speed is a very respectable 124mph, 0-62mph takes 9.9 seconds and the official Combined Cycle fuel economy is 56.5mpg.

During a very brief test drive at the recent Society of Motor Manufacturers and Traders media test event held at the Millbrook Proving Ground, my car returned 42.8mpg and this included plenty of stop-start driving on Millbrook's 'city' route. Expect more in real-life conditions but remember, this is a sports car — so press the pedal with care!

For technical readers, the CR-Z has a 1.5-litre four-cylinder petrol engine linked with an electric motor using Honda's proven IMA hybrid technology including energy capture. The engine produces 112bhp at 6,100rpm and the electric motor 13bhp at 1,500rpm; total peak power available is 122bhp at 6,100rpm. As for torque — the 'grunt' that makes the car responsive — the petrol engine has 106lb ft of it at 4,800rpm and the electric motor 57lb ft from just 1,000rpm giving a total peak useable torque supply of 128lb ft at 1,500rpm.

It's this torque that swiftly moves the CR-Z from standstill and helps during overtaking at low to medium speeds. The power delivery is pretty seamless and with a manual gearbox there isn't the normal hybrid issue where the CVT transmission seems to absorb power and make the engine seem dull and noisy.

The CR-Z driver has the choice of three driving modes — selected by pushbuttons. All three are self explanatory: Sport, Econ, and Norm. There is also an Eco Assist driving guidance setting which is used in Econ mode where the 'space-age' controls show the driver, via changing instrument colours, whether or not they are driving economically.

If you are attracted by the sporting good looks of the CR-Z you will be impressed even more by its futuristic control and instrument display. It takes time to learn, but it all works. Like most hybrids, the CR-Z has no driving 'character' — everything feels sanitised; neutral balance, just enough power boosted under acceleration by the electric motor to allow the word 'sports' to appear in this editorial and the steering, even in Sport mode, lacks feedback.

On the plus side the CR-Z Coupe has eye-catching, sporty exterior styling. And it's even better inside — a real Starship Enterprise instrument layout. It's also pleasant, if not fun, to drive and it's cheap to run — that said, I'm not so sure that 'GT' (Grand Tourer) is the correct specification label for this version. Not so inviting are the very small rear seats and limited rear and rear-quarter visibility. And it's worth keeping in mind that some new-generation diesel-powered models offer less CO2 emissions and cost less to buy. — David Miles