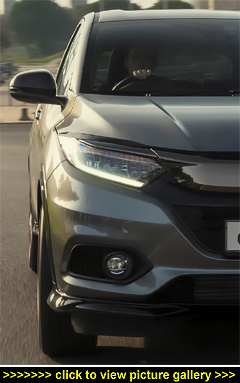 “Motorists looking to find a car
with some ‘magic’ inside need look
no further than Honda’s latest
crossover, the HR-V...”

TO QUOTE THE VAPORS song from their 1980 hit album New Clear Days, British drivers might soon all start Turning Japanese. Actually, that's no bad thing seeing how good Honda's line-up is, stretching from its supermini Jazz to its supercar NSX. We've just enjoyed a week smooching around in its smart but understatedly-stylish coupe-esque crossover, the HR-V.

The HR-V's styling enjoys the advantage of the automotive equivalent of the good bone structure that some people are lucky enough to be born with — in other words, it's clean-cut good looks not only catch your eye now but, more importantly, will make sure it ages gracefully.

Yes, it has the cues and the stance of the crossover- compact SUV genre but its designers have made them their own, and while distinctive — especially its full wraparound combined headlight/grille treatment — there's not a whisper of 'showy' about its high-riding sporty looks.

As flattering as having a sporty body is, it's what's on the inside that really counts and, of course, that 'magic' zing we mentioned at the beginning. Swing open the driver's door and you'll love the harmonious interior packaging. Look closer and you'll be pleased to find plenty of equipment and thorough fit-and-finish combined with upscale materials.

The roomy cockpit gives off an instant upscale ambiance with a tasteful use of high-gloss black surfacing and well-padded seats upholstered in quality-grade leather — it's a very satisfying place to sit. The dash is cleanly sculpted with some interesting and unique touches such as the strip of three linked air vents on the passenger's side; ahead of the driver the hooded instrument panel houses three individual dials. Everything is logically placed and clearly 'ease of use' was the mission statement given to the HR-V's interior design team.

Larger on the inside than many of its competitors despite its relatively compact external footprint, the HR-V serves up liberal passenger space with plenty of head, leg and foot room. You sit high enough up front to enjoy that must-have 'in command' feeling. Visibility from the helm is fine and even views of what's coming up behind are reassuring, so none of those nerve-wracking "It's behind you!" pantomime moments.

When it comes to reversing there are front and rear sensors and a rear-facing camera to make it all hassle-free. A smart looking and good-to-hold leather-wrapped multifunction steering wheel puts extra functionality at your fingertips as well as making wheel-twirling something to be enjoyed.

Comms have their home in the seven-inch touchscreen sited at dash-central. Higher spec HR-Vs get both Honda's Connect infotainment system (with Bluetooth, CD tuner and DAB radio, Internet browsing, and Aha app along with ample USB and HDMI jacks) and a Garmin SatNav. The menus are easy to navigate, and the 3D mapping and spoken directions foolproof and dependable — needless to say, you won't be making many U-turns! These latest-gen HR-V models also come with Apple CarPlay and Android Auto for straightforward smartphone interfacing — great for those who actually prefer to use an app for their navigation. Moi? I'm a 'built-in' fan so give me the Garmin every time.

Places to store personal bric-a-brac and drinks are easily found: a decent-sized glovebox, good door bins, a storage box under the armrest between the front seats, a deep, dual-use tray with pop-out dividers for takeout cups for when you're 'carrying', and a nifty secret 'cave' built into the lower front section of the central tunnel with power and connection ports that's accessible from either front seat.

Honda make sure their cars are up to scratch with safety kit and the EX version comes with a five-star EuroNCAP endorsement, a full set of airbags, and Honda's Advanced Driver Assist System that uses radar sensors and forward- and rear-facing cameras to boost its accident avoidance tech.

Conspiring to bolster its coupe-esque silhouette are rear door handles hidden in the trailing top corner of the rear door frames. Actually, they're very practical to use. Once the door's open you can easily climb aboard and where you'll find more interior space than in its rivals — even larger crossovers such as Nissan's popular Qashqai aren't as roomy. While the HR-V sits between supermini-sized and larger crossovers, it outdoes most with its big-hearted wheelbase and well thought-out packaging.

The rear cabin's sense of spaciousness is really inviting, offering as it does generous head, knee and leg room. People-watchers can indulge their hobby thanks to decent views out — the darker privacy glass to the side windows isn't restrictive when looking outwards although it does afford some cover against anyone looking in.

And, powered sunblind open, there's all the light you could want. For family drivers the outer rear seats have Isofix mountings; also fitted are useful pouches on the back of the front seats, a padded central armrest, usable door bins, and a central dual-use bottle/cupholder. Lots of good reasons, then, to choose a back seat in this Honda.

Finally we come to those 'Magic Seats' — the HR-V's clever trump card. These are flip-up rear seat bases that can in just seconds and with no fussing, be lifted up — cinema style — and locked vertically against their rear backrests to create a large, self-contained, full-cabin-width, flat load area between the front seats and the boot.

There's useful extra height too due to the very minimal central tunnel dividing the footwells so taller items can be carried inside the car rather than laid down in the boot or loadbay. Other crossovers can't match this degree of cargo-carrying wizardry which gives the HR-V a winning USP.

The HR-V's ride quality is well matched to its family car role. Bolstered by comfy seats, most in-town bumps and irregularities are well smoothed out and your passenger won't be concerned about what's passing underfoot unless you carelessly clip a pothole. Further enhanced by well-suppressed road and wind noise, the HR-V is also a mile-minimising cruiser.

Power choices are between three four-pots: a 1.5 i-VTEC 130PS (128bhp) petrol, which is quiet and smooth, a 1.6 i-DTEC 120PS diesel, and the recently added Sport model powered by a 1.5 turboed petrol outputting a brawny 179bhp. All the powerplants are part of Honda's so-called Earth Dreams Technology series denoting their maximised efficiency. With 128bhp and 114lb ft of torque, the 1.5 i-VTEC's performance is more than willing and has a likeable character that makes it easy to get along with, especially when partnered with Honda's autobox.

While a six-speed manual gearbox is the default for all HR-V models, petrol-engines offer the option of an automatic gearbox. This is a CVT unit with seven simulated gears that mimics the way a regular torque converter automatic gearbox goes about its business. In the EX, the CVT is quietly fluent and de-stresses pootling around the houses. It also adds to the cabin's refined ambiance when sailing along at 70mph on the motorway. Paddleshifters on the steering wheel come in handy when pressing-on takes priority.

If stretching a gallon is a major factor then the diesel, with its 70mpg official combined cycle rating may well temp you away from the petrol version. Or maybe not because the figure for the 1.5 petrol is still good: 52.3mpg. The fact that over the course of a week's hard driving we recorded a test average of 47.7mpg shows that a further advance into 'fifty' territory is doable by ordinary motorists in less of a hurry than us and who bother to press the green Econ button.

All HR-V versions are front-wheel drive (yet another little boost for economy over 4WD) and dynamically perform well. The trade-off between ride comfort and handling is nicely balanced, allowing it to perform well in terms of both. The steering is acceptably weighted and, aided by plenty of grip and well-managed body lean, turns in quickly enough to let you make use of the car's manoeuvrability. If you think it's untroubled ride will hold you back when pressing on then you'd be mistaken — the HR-V can be suitably entertaining and feels secure when you're relying on its nimbleness.

When it comes to boots the HR-V packs a big UN In fact, 'capacious' isn't too big a word to describe it — at 470 litres it's certainly well above average. To put it in perspective, that's forty more litres than you'll get in a Qashqai despite the 4.3-metre-long Honda taking up four inches less road space.

Drop the rear seats (they sit perfectly flat as the base cushion dives forwards and down in tandem with the backrest as they fold) and you end up with a flat and seamless loadbay that will swallow 1,533 litres of cargo despite that coupe-esque roofline.

Access for loading is excellent through the tall and wide tailgate aperture; longer items can also be easily carried thanks to a front passenger seatback that folds backwards all the way to completely flat. And here's more — beneath the fold-over segmented boot floor is an extra and very large hidden storage area.

Why do people keep on buying crossovers and SUVs? Obviously, because they like them. And one of the major reasons for that is because they're so user- and family-friendly. The HR-V is all of that but it's also über-versatile, comes very well equipped, is thoroughly well-made, goes easy on the fuel and is well-priced. Turning Japanese? I think I'll join you. ~ MotorBar