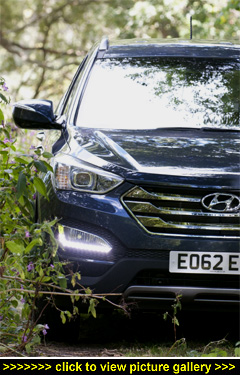 THE PREVIOUS GENERATION SANTA FE had anonymous and perhaps dated styling — where astute owners scored was in not bothering about the looks but instead appreciating its value-for-money specification, its on and off-road abilities, comfort, and towing credentials.

With prices having increased by over Ł1,700, the new-generation Santa Fe is now with us and remains a capable and durable SUV with the option of two- or four-wheel drive versions depending on the trim level.

All models use a re-worked 2.2-litre, four-cylinder, 194bhp turbodiesel engine. The official Combined Cycle fuel economy for 2WD versions is 47.9mpg with CO2 emissions of 155g/km. Four-wheel drive versions officially manage 46.3mpg and emissions of 159g/km. The new road tax rate for all Santa Fe models is Ł175 a year, with company car tax at 25%.

This all-new Santa Fe comes with a larger body and wearing a smart new suit of clothes; while the outgoing range was functionally distinctive, the new models are less so. Not that there's anything wrong — it's just that now the Santa Fe looks very similar to any other medium/large 'soft' SUV on sale.

At a glance it could be the new Honda CR-V, the Mitsubishi Outlander, Kia Sorento or one of the older Chevrolet Captiva or Vauxhall Antara SUVs.

Like other compact SUVs such as the Ford Kuga, Mitsubishi ASX, Hyundai ix35 or Kia Sportage, the new Santa Fe's side styling follows the rising waistline route which means smaller side windows at the rear. This, of course, reduces headroom for rear seat passengers. At the front a prominent high bonnet design achieves high pedestrian safety ratings. Overall, the new body looks more curvy and rounded than the outgoing version's square-edged but more functional design.

Inside the Santa Fe looks and feels well made with a strong showing of equipment although the new high-level fascia looks rather 'busy' with lots of buttons and controls; and there are more on the steering wheel.

The 4WD versions have the now-commonplace system where drive moves automatically from front to all four wheels as grip dictates. However, there is a button to select permanently-locked all-wheel drive with another button to engage descent control for steep off-road work.

Yet another button varies the feel of the electronic power steering from Comfort through to Sport, but in all modes the feedback is limited and gives inconsistent weighting.

The Santa Fe's ride quality is comfortable and the suspension compliant, and it does a good job of absorbing shocks from the deepest of potholes even running on large 18-inch alloy wheels.

Due to its high-off-the-ground design there is, even with the self levelling suspension, some body roll during cornering although I'd be happy to accept this because of the impressive ride comfort.

The best selling seven-seat model has the usual three rows of seating. There's plenty of room up front and in the middle three-seat row, which also slides fore and aft as suits.

The two individual rear seats are only really suitable for children so far as legroom goes, and access is through the rear side doors.

With the rear seats in use boot space is minimal. With them folded the load space goes from large to larger still once the split middle seats are folded down.

From 516 up to a maximum of 1,615 litres of load space is available, making the Santa Fe a very handy and easy to use vehicle whether it's luggage or sports equipment you're lugging, or whether it's ferrying family or performing workhorse duties. However, it's not quite as versatile as the modern-generation large MPVs.

That noted, unlike an MPV the advantage of the Santa Fe is that it can be driven more or less anywhere in any conditions, on or off-road, plus it's also a very capable vehicle for towing boats, caravans, horse boxes or trailers.

My test 4WD version was the Premium model (with a standard six-speed manual gearbox) carrying a hefty price tag of Ł30,195. However, in fairness this price doesn't appear to be out of line with other similar 4WD SUVs although the Santa Fe has now lost the edge on value-for-money pricing that the previous model enjoyed.

The 2.2-litre four-cylinder turbodiesel engine is generally refined and responsive thanks to its 194bhp but better still, with 311lb ft of torque available from just 1,800rpm, it's also flexible. The six-speed manual 'box is well suited to this engine but on occasions, especially when cold, the gear selection can be notchy — so maybe it's worth considering spending that extra Ł1,700 and going for the automatic transmission which many buyers do in this category of vehicle, particularly those who tow heavy weights as there is less wear and tear on the transmission.

As already mentioned, the official Combined Cycle fuel consumption figure for the manual version is 46.3mpg; the auto just a fraction less.

My week's driving on all types of roads and in all kinds of weather returned a liveable 39.5mpg. Top speed is 118mph and, more importantly, the zero to 62mph acceleration time is a useful 9.8 seconds.

Apart from the notchy gearchange the latest Santa Fe has a lot to recommend it. Practical and comfortable as 4x4 family or workhorse transport, it also comes with a high specification and a long warranty, has a strong engine and decent fuel economy — and has a proper spare wheel!

Perhaps the Santa Fe has lost its title as the smart buyer's bargain choice medium/large 4WD SUV, but overall the latest model range is still a worthwhile package. Despite the competition in this segment it should bring in new customers as well as satisfy the loyal band of Santa Fe followers in the UK. The new range is also covered by Hyundai's enviable 5-Year Triple Care unlimited mileage warranty package, road side assistance and annual vehicle health checks. — David Miles