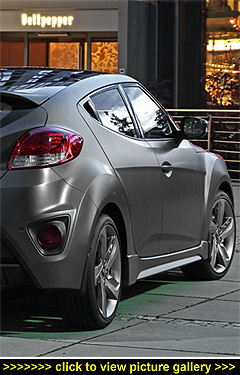 “With two doors on one side and
one on the other, the Hyundai
Veloster always turned heads;
now a new turbocharged high-
performance Turbo SE version will
put them in a spin thanks to a 33%
power hike to 184bhp...”

THE TURBOCHARGED VERSION of the Veloster 1+2 door coupe is in the showrooms now, priced from Ł21,995, and it's the first model to feature Hyundai's 1.6 T-GDI direct injection petrol engine partnered with a twin-scroll turbocharger. For the record, the non-turbocharged original 138bhp GDI petrol variants cost from Ł18,000.

The better to suit European driving tastes and enhance driver pleasure, its sporting spec includes firmer dampers and the powerplant delivers better torque, with maximum 'grunt' on tap between 1,500rpm and 4,500rpm of 195lb ft (up from 123lb ft). It also comes with a six-speed manual 'box with a wider set of ratios than the non-turboed version.

More in keeping with its sporting looks, the Turbo boasts a higher top speed of 133mph with zero to 62mph over in 8.4 seconds, alongside a claimed 40.9mpg on the combined cycle.

Three colour choices are offered for the Turbo: White Crystal; Phantom Black (Pearl); and another Hyundai-first — a Matt Grey finish. The Pearl and Matt Grey paints add Ł445 and Ł525 respectively to the price. A tilt-and-slide panoramic sunroof is also available, at Ł950.

The Turbo's cabin boasts re-designed leather seats with panels in a different colour, and with the 'Turbo' motif embossed on both front seatbacks; the driver gains power-adjustment and lumbar support.

A very brief run in the latest Veloster Turbo prior to its UK sales launch last week quickly confirmed that, thanks to the much-needed performance boost, this is definitely a car you can enjoy.

The driving position is commanding and there's noticeably more power and much more torque for mid-range overtaking. I liked the slickness of the gearchange; plus the wider ratios mean you are not having to make rapid changes up the 'box during acceleration, although the particularly long clutch travel was rather annoying.

On the move the power feeds in smoothly, but quickly, with a touch of lightness at the tail becoming apparent, although driven with some restraint it grips well and responds faithfully to throttle, steering and brakes.

Ride quality has been tuned to be firmer — not quite ideal for our iffy UK road surfaces and it 'bumps' over some sections of tarmac. However, it always let you know how it's coping via the amount of road and suspension noise.

Officially, 40.9mpg is the figure to note and I recorded 37mpg — enough to make it a good long-range tourer if you don't need a lot of cabin room or luggage space. And no doubt a steady run along motorways and main roads would keep down the engine and road noise.

Reasons to buy include performance, the driving position and controls, real-life economy, and reasonable boot space (320 litres). The downside is not so good rear visibility or rear seat legroom, engine and road noise, and that long-travel clutch.

However, the good points outweigh the bad and in Turbo guise it brings a timeless smile to the driver's face; in future years I can see this Veloster becoming a sought-after niche classic. — Robin Roberts