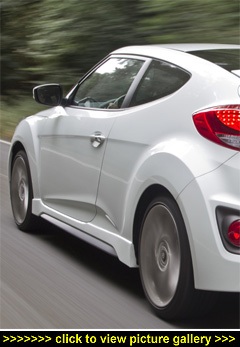 “Imagine a brand like Hyundai made
a pukka sports car; a brand that
offers no-frills value, plenty of kit, one
of the best warranties in the industry
and, increasingly, cars with genuine
buyer appeal. Let’s not forget that,
thanks to an outpouring of European
design talent to Korea, Hyundai is
starting to make cars that actually
look good, too...”

GOOD NEWS — you don't have to imagine any more. Hyundai's Veloster has made a real impact as a striking-looking and utterly unique addition to the world of sports machinery.

However, many have been disappointed by the Veloster's lack of performance, and that's precisely where the new Turbo comes in. The Veloster Turbo is the first car to receive Hyundai's new T-GDI engine with a high-compression, twin-scroll turbocharger, while it also benefits from sharper suspension and steering settings.

But let's get one issue out of the way right now — this car's Achilles' heel is its engine. For starters, a capacity of just 1.6-litres doesn't feel manly enough. In the standard Veloster, it makes a modest 138bhp and feels oh-so-anaemic; and now, even with a turbocharger attached, the power output doesn't breach the 184bhp barrier.

And these days, 184bhp is way short of most hot hatchbacks — the industry average is around 225bhp. The Turbo's raw performance figures tell their own story: 0-62mph in 8.4 seconds and 133mph v-max are beaten by virtually every rival.

And the way the power is delivered doesn't help: it never feels particularly punchy; and the very ordinary sound of the powerplant doesn't encourage you to make full use of the rev band.

Ultimately, it does pull along with decent pace if you keep the engine in the peak torque zone of 1,500-4,500rpm, and the Turbo's six-speed manual gearbox works very well. But to deliver the kind of performance keen drivers expect, I think it really needs an engine of at least 2.0 litres.

The Turbo has stiffer suspension than standard, and it shows. Damper rates front and rear have been increased so that it sits more solidly through corners without spoiling what is a very decent ride quality, especially by sports car standards. But in no way could you call the Veloster Turbo the sharpest driving tool in the box.

Another area of significant improvement is the steering, which has been retuned and is now much better than the standard car's. Although it's still not the keenest system around (it's a little light for my taste) it's probably the best steering that Hyundai has ever engineered.

No review of the Veloster can ignore its door layout — a single aperture on the driver's side but two doors on the near' side. This almost wilfully weird layout gives the Veloster a Jekyll and Hyde character: from one side, it has the look of a five-door hatchback; from the other, it's a racy coupe.

If you thought the Veloster looked distinctive, the Turbo version looks positively science-fiction. The front bumper, grille and front fog lights are unique to the Turbo, but it's the tail that looks most dramatic with its close-set twin exhausts, diffuser and round fog lights. The split-window tailgate is emphasised by a bigger rear spoiler, and following traffic is in no doubt about what you're driving, thanks to a big red 'Turbo' badge on the bootlid.

Inside, the heavily bolstered seats have 'Turbo' conspicuously embroidered into their backrests. Indeed, so prominent are they that my neighbour's eight-year-old son thought the car was called 'Turbo' when he sat in the driver's seat.

The question for buyers is whether talented rivals like the VW Scirocco 2.0 TSI with 210bhp and the Toyota GT86 with 197bhp are worth the extra money (Ł25,640 and Ł24,995 respectively). There's no question in my mind that they are.

Whether the more directly price-comparable Scirocco 1.4 TSI and Astra GTC 1.6 Turbo are as clear-cut is not so sure, and that's where Hyundai might score some sales. And, of course, only Toyota can match Hyundai's five-year warranty.

In truth, the Veloster is unique in the market. It's like a halfway house between a hot hatch and a coupe. It's loads more practical than a regular coupe, yet so much more dramatic than a hatchback. Now that there's a Turbo version on offer, the Veloster has gone at least some of the way towards becoming a true sports car. — Chris Rees