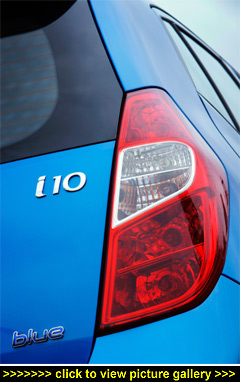 “First drive of Hyundai’s new i10
range, the cheapest five-seat
car on the market to achieve a
sub-100g/km CO2 — available in
Blue and other colours...”

HYUNDAI'S NEW i10 BLUE — the headline act for the revised range — goes on sale next month. The i10 Blue (as it's called, but other colours are available!) costs Ł9,195 and is powered by a new 99g/km, 1.0-litre, 68bhp, three-cylinder, petrol 'Kappa' engine with Stop&Go and has a five-speed manual gearbox. Up to 20% of new owners are expected to go for this model — but it could be higher if the financial climate gets even tougher.

This means that its 99g/km of CO2 emissions incurs no road tax and, for those who live in London or commute, there will be exemption from the Congestion Charge. Although the i10 Blue costs Ł1,000 more than the refreshed 1.25-litre Classic specification on which it is based, Hyundai points out that the annual Congestion Charge for a daily visit or commute would be Ł2,500 a year so the i10 Blue still saves owners a fistful of money.

The 1.25-litre models are expected to remain the best-selling versions and they have a revised four-cylinder petrol engine which has 85bhp — 10bhp more than the old unit — with CO2 emissions of 108g/km.

This, too, means Ł0 road tax, but Ł20 for the second year onwards. These versions have a group 12 insurance rating. The 1.25-litre model is available with Classic, Active, Active Auto and Style trim and equipment levels at prices ranging from Ł8,195 to Ł9,595.

The award-winning i10 is Hyundai's best-selling model range, with 19,500 of them sold last year. They expect to sell up to 20,000 units in the ten months of sales this year as the Korean manufacturer aims for 64,500 UK annual sales in 2011 — that's more than Honda and very close to what Citroen might sell.

The previous i10's sales success speaks for itself and the five-door city car (3.5 metres long and 1.6 metres wide) has consistently received numerous awards and accolades from the motoring media for its value for money, long warranty, cheeky styling, roomy interior and nimble performance. They are also well built — in India.

The new i10 benefits from a series of cosmetic changes that bring a fresher look. These include a redesigned radiator grille, more angular headlights and new front air intakes all of which combine to create a more hexagonal frontal shape — one that will be a signature feature on all future Hyundai models. A reshaped lower bumper and angular front fog light recesses complete the new front-end.

The design upgrades continue on the sides and back of the car, with new style wheels and redesigned rear lamps and bumper completing the new i10's streetwise look. In addition to Blue there are six colour schemes available, including two new ones — Ice Silver and Crystal White.

Air conditioning is standard across the range and there are also four airbags, five seats, Isofix mountings, electric windows, colour-coded bumpers, central locking, an integrated radio with MP3-compatible CD player, USB and iPod plug-in — all standard. For the record, boot space is 225 litres with the seats up and an unexpected 910 litres with the rear seats folded

This level of equipment is standard on the entry-level 1.25-litre Classic trim as well as low-CO2 1.0-litre Blue versions. For those who desire even more there are two further steps up the range, but only for 1.25-litre models.

At the top of the specification tree, the Style version now adds new chrome fascia and door inserts, chrome interior door handles, a leather steering wheel, gear knob and handbrake, a rear roof spoiler and even heated front seats and an electric sunroof. Around 35% of buyers are expected to go for this spec.

One possible downside is that the 1.0-litre low-CO2 engine is only available with the Blue specification — same as Classic but with 13-inch steel wheels, which is a pity because I can see a need from customers for a low-CO2 version with a higher specification. But, and it is a big but, the Ł1,000 price premium for the 1.0-litre unit over the 1.25-litre engine would make them expensive.

It would also have been agreeable to have an on-board computer function which a miles-per-gallon readout — surely with such good fuel economy it would be good to let owners see how little fuel they were using.

The ride and drive characteristics for both 1.0 and 1.25-litre models is very much the same: lively, nimble and at home on main roads and motorways despite the relatively compact size. The distinctively sounding three-cylinder engine in the 1.0 Blue version gives a top speed of 93mph with 0-62mph taking 14.8 seconds. The four-cylinder 1.25 engine feels a little smoother and a little more responsive and gives a 102mph top speed with a zero to 62mph time of 12.2 seconds.

The ride and road holding is a little bouncy and top heavy causing body roll on winding country roads but it is, after all, a commuter car — although one with the ability to tackle the occasional longer motorway journey.

Cruising at 70mph with either engines is not an issue, although being a narrow tracked but relatively tall car, side wind gusting was evident. Roads noise from the tyres was also very noticeable. Real-life fuel consumption for both engines is, I suspect, around the 55mpg mark but with no on-board computer I cannot confirm that.

Reasons to buy include economical to run with very low taxes, roomy, reasonable specification, nimble around town, easy to drive and attractive styling. Not so welcome are the high price premium over the larger 1.25-litre engine, no on-board computer to check on real-life fuel economy, tyre noise intrusion and it's prone to side wind gusting.

The growth of the Hyundai brand in the UK in the last few years has been impressive and with more and more dealers being added, the new cost-saving i10 models cannot fail to be a big addition to the brand's success. — David Miles