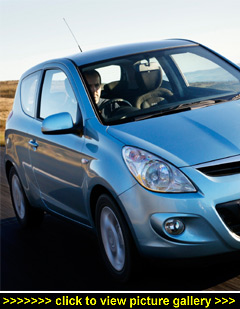 “Hyundai’s i20 is a very persuasive
car — whether you need to move
your family or just yourself, these
50+mpg supermini-sized hatchbacks
fit the bill...”

REASONS TO BUY ONE ARE MANY and varied: highly competitive price, high-value spec, longer than normal five-year unlimited mileage warranty and designed and tested in Europe. All valid reasons but the strongest pull has to be the i20's real-world fuel economy — 50+mpg.

Powerplant choices for the i20 hatchbacks are a pair of petrol engines (1.2 and 1.4-litre) along with a 1.4 CRDi diesel unit. Adding some variety are three levels of trim and spec: Classic, Comfort (the most popular) and Style. Prices start at a headline-grabbing Ł9,745 and top-out at a still competitive Ł13,745 for the best-specified diesel model.

The 1.2 Comfort three-door tested here costs Ł10,595 but for just another Ł500 you could buy the five-door version — having those two extra doors makes life easier if you need to carry passengers or even for just dumping coats, bags or shopping on the rear seats. The three-door models may look sportier but in real-life five is the most versatile number.

While the three-door might not be the biggest kid on the block, boot and load space are good for its 3.9m-long footprint: 295 to 1,060 litres.

As mentioned earlier, the single most compelling reason to buy one of these i20 models is its real-world fuel economy.

Officially, this four-cylinder 1.2 'Kappa' petrol engine, with its modest 77bhp and 87lb ft of torque, looks no more than okay on paper.

Far more newsworthy is the Combined Cycle economy — 55.4mpg; and my test car returned 51.8mpg. This is excellent for a petrol engine and shows just how well developed are the new generation petrol engines.

Furthermore, this 51+mpg was not down to any 'pussyfoot' driving but around 300 miles at the legal maximum on motorways with another 200 or so miles on country A and B roads plus another 100 miles of stop-start commuter driving. I was genuinely impressed and on the strength of this result I would recommend the i20 to anyone.

Low, too, are the tailpipe emissions — just 119g/km, so road tax in the first year of ownership is Ł0 and only Ł30 per annum thereafter. Company car drivers will raise a toast (but not when they're driving!) to the 10% Benefit-in-Kind rate. This is as good as most small diesel engines but without the extra Ł1,100 'penalty' a small- to medium-sized diesel generally costs over the same petrol model. And the low Group 8 insurance rating will be affordable to even the youngest owners.

Admittedly the acceleration, flexibility of power delivery and outright top speed are not so attention grabbing, but the 1.2-litre i20 is definitely not sluggish. Top speed is 106mph (although that's of no real relevance) and the benchmark 0-62mph acceleration time is 12.9 seconds; both more than enough for most drivers. Even steep hills didn't cause any real problems although getting past slower traffic on busy A-roads needed some planning and swift gearchanges.

Fortunately the petrol engine revs freely so during hard overtaking acceleration it was very easy to hit the rev-limiter; thankfully the five-speed 'box is slick and precise. A six-speed unit would be nicer as it would reduce revs at cruising speeds and consequently engine noise. Customers wanting an automatic transmission can have one for an extra Ł1,045 but only — and sensibly — when mated with the larger 1.4-litre petrol engine, which still doesn't cost the earth to buy or run.

Despite the European design and testing, the i20's ride comfort and road holding are not its strongest features, being no more than acceptable: the suspension doesn't absorb potholes and bumps with ease; road noise intrusion is quite high; and there's body-roll during cornering. That said, none of these negative comments would put me off buying one!

Nor does the i20's conservative styling help it to stand out in a crowded car park — but neither is it off-putting; it's just not the strongest reason to buy this particular Hyundai.

The specification, however, is the opposite: for the money it really is first class. Included in the best-selling Comfort trim is air conditioning, ESP electronic stability control, power windows and door mirrors, cooled glovebox, remote audio controls on the steering wheel, trip computer with mpg readout, Bluetooth connectivity with voice recognition, a decent sound system with Aux-in, full USB and iPod compatibility, active front head restraints, a comprehensive array of airbags, 15-inch alloy wheels and a five-year warranty.

Against: Functional rather than fun to drive, conservative styling, bland interior, high road noise intrusion and indifferent but nevertheless capable handling. More than making up for this though is the 50+mpg real-life fuel economy, low road tax and insurance costs, very attractive pricing, long warranty and a high level of specification — a lot of car, in fact, for the money. I must say that this 1.2-litre i20 is an impressive ownership proposition for many would-be supermini buyers. — David Miles