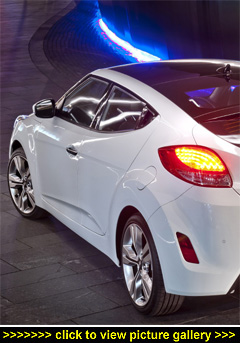 UNUSUAL WHY? While the Veloster has four doors, they're not in a layout you might expect: in addition to the usual two front doors and a rear tailgate, there's also an extra side rear door on the nearside to ease access for rear passengers.

I'm not so sure about this feature; if there's room to fit a rear side door on one side of the car, why not fit a matching one on the other so both rear passengers can get in and out easily? So, a bit of a gimmick? Or innovative? You decide…

The Veloster's forerunner was the well-liked two-door Coupe, sold until 2009. The newcomer is expected to outsell its predecessor, with around 5,000 UK annual sales. Prices start at a competitive Ł18,000 with a six-speed manual gearbox and rise to Ł23,150 if the optional Media and Red Leather packs and the DCT dual-clutch automatic transmission are added.

All models are powered by a 138bhp 1.6-litre normally-aspirated GDi (Gasoline Direct Inject) petrol engine although a 184bhp turboed version will be added to the line-up later this year.

Without Blue-Drive, manual versions return 43.5mpg (officially) with emissions of 148g/km; the DCT auto returns 44.1mpg with CO2 emissions of 145g/km. This means the Blue-Drive version incurs a road tax bill of Ł120; the standard model costs Ł135 a year, as does the DCT version. Company car drivers who like the looks will pay 18% BIK tax for the Blue-Drive and 19% for the manual and DCT variants.

Even if it's not yet endowed with sports performance, the Veloster certainly looks sporty, fronted by large but sleek headlights with LED daytime running lights and twin air vents in the curvaceous bonnet.

The asymmetrical design uses exaggerated sculptured panels and a sharply upswept window line at the rear sides in conjunction with a falling rear roof line that, unfortunately, restricts rear-quarter visibility. The rear section of the roof is glass and this links neatly to the rear tailgate, which has quite a small window and a high rear sill so heavy items have to be loaded down into the boot.

The seemingly long wheelbase helps to conjure up the coupe-esque side profile, smartly set off by 17-inch alloy wheels, while at the tail, twin tailpipes — mounted side by side in the centre of the rear apron — give it a racy look.

Inside the Veloster there's an air of completeness and quality; constructed of what looks like tightly woven, soft-feel but textured material, the sculptured fascia catches the attention right away.

The neat centre console accommodates a V-shaped panel which houses the radio, heater and touchscreen. Sports style instruments are clear and well positioned right in front of the driver.

A media pack (touchscreen SatNav with rear-view parking camera, parking guidance system and 7-speakers including amp and subwoofer) and a red leather interior are available as options on the Sport derivative only.

But the main talking point, or indeed feature, about the Veloster 2+2 coupe is the oddball extra nearside door that makes an unusual total of three passenger doors plus a tailgate. Given its narrowness and the low height of the frame, access through the rear side doorframe can be awkward for an adult but it works for children.

Based on the Hyundai i40 saloon and Tourer, the chassis dynamics are not really suited for a sports coupe. It's comfortable enough but the suspension allows the body to fidget around, giving unsettled handling even at medium speeds.

As a driving enthusiast's car it lacks the poise of, say, Volkswagen's Scirocco coupe. Hopefully the suspension settings will be improved for the more powerful turbocharged version due later this year.

The engine will suit driver's who want sports style from their car rather than sporty performance. As a modern direct injection, bread-and-butter petrol engine with 138bhp and limited torque of 123lb ft from 4,850rpm, it performs without distinction.

It gets the job done well enough but other new engines of this type offer much more response and performance. Top speed is 125mph and zero to 62mph takes 9.7 seconds. My week-long test drive covered most types of roads and conditions and returned 38mpg against the official 43.5mpg figure.

Against? Difficult access through the rear side door, fidgety ride and the handling is not as composed or as agile as its European rivals.

The Veloster is an interesting addition to the Hyundai range, replacing the popular but long-gone Coupe, although for some enthusiastic drivers it will be a case of style over function. On the plus side it's a competitively priced and roomy 2+2 coupe, well equipped with a nice high quality interior, impressive warranty package and an interesting third passenger door design. — David Miles