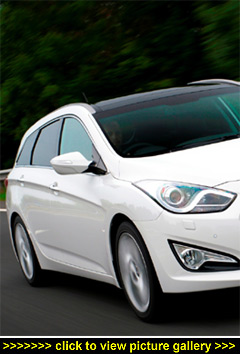 “If you’re a business user-chooser,
circle April 2012 in your diary now.
So what’s special about that specific
date? Actually, you’re going to
be mugged...”

DOING THE MUGGING IS THE USUAL CULPRIT — the tax man. His weapon this time? Benefit-in-Kind tax rate increases. But help is at hand — from Hyundai with its new upper-medium sector i40 five-door, five-seater Tourer estate.

Equally important to both the man in the street as well as businesses, is road tax. Helping to reduce running costs, the new i40's rates start at a competitive Band C (Ł0 First Year; then Ł30 per annum thereafter). i40 models also have the lowest insurance group ratings in their sector, starting from 12E, which also reduces costs.

A raft of new Hyundai models is expected to push annual sales past 100,000 by 2015, starting next month with the September arrival of the i40 Tourer and to be followed two months later by the four-door i40 saloon.

Designed and engineered at the company's European R&D headquarters in Rüsselsheim, Germany, the i40 is built in South Korea. All i40 models are supported by Hyundai's, fully transparent Five Year Triple Care assurance: this package offers a five-year unlimited warranty, five years' of roadside assistance and five years' of vehicle health checks.

Three trim levels are on offer: Active, the best-selling Style, and Premium. BlueDrive lower-CO2 versions can be had in Active and Style spec. The expected best-selling i40 Tourer combination will be the Ł22,295 134bhp 1.7 CRDi Style BlueDrive. This comes with 119g/km tailpipe emissions, a Benefit-in-Kind tax level of 13% (the current rate) and a 16E insurance rating.

Three is also the number of efficient powerplants i40 buyers can choose from: 133bhp 1.6 GDI and 174bhp 2.0 GDI petrol engines; and 1.7-litre CRDi turbodiesels (with 114bhp or 134bhp power outputs). All engines have six-speed manual transmissions although a six-speed auto can be specified (Ł1,500 extra) for the most powerful diesel. Hyundai's eco BlueDrive, which makes use of Intelligent Stop & Go technology, is standard on all 1.6 petrol and 1.7 diesel Active versions (the least expensive) and also on the Style 134bhp 1.7 BlueDrive model, but not across the more expensive variants.

Where the i40 scores very heavily over its rivals (Ford Mondeo, Vauxhall Insignia, Honda Accord, Toyota Avensis and VW Passat) is with its standard features. Together with the excellent warranty, these really set it apart from the competition.

But it doesn't end there for the new i40 Tourer: in addition to high specifications, tax-saving, low-CO2 engines and long unlimited mileage warranties, the i40 also impresses with its styling and size. Hyundai knows that to succeed in Europe they need cars which suit our market — not clones of Korean domestic models or versions of models they sell in the USA.

Neither does the sleek, eye-catching design of the i40 Tourer impact negatively on the levels of interior comfort, cabin versatility and practicality or cargo capacity. Measuring 4,770mm long and with a wheelbase of 2,770mm, the Tourer offers very generous front and rear legroom. Combined with an 1,815mm width, it makes for a spacious cabin for five adults.

And there's a load carrying capacity to match: with the rear seats in place there's 553 litres of space (that's more than most of its competitors including the Mondeo); with the seats folded there's 1,719 litres available. It also has the lowest load area floor level in its segment — just 592mm (23 inches) from the ground — making it easy to lift heavy items in or out. Less agile family dogs will give it their unconditional approbation!

The only niggle about the load space is that the split-folding rear seats do not fold down completely flat, so longer items have to be pushed uphill if they reach the last third of the load bay.

All other aspects of the interior (the quality of which, incidentally, is markedly improved), the layout of controls and instruments, the high equipment levels and, above all, the space, are very impressive.

Because of our poor road surfaces, Hyundai UK has chosen a softer suspension setting so ride comfort is generally good. There is some noise intrusion from the low rolling resistance tyres, and the steering is overly heavy moving from the straight-ahead position and while the steering's strong self-centring may be suitable for mainland Europe's long straight roads, it's not quite so good for the UK's winding routes.

I had a brief first drive of the 133bhp 1.6 GDI direct injection petrol engine — most likely to appeal on purchase price to low-mileage retail users. Unlike many new competitor small capacity petrol engines, this unit is not turbocharged so the potentially ample 121lb ft of torque is not on tap until 4,850rpm. It needs the 'grunt' lower down the powerband, which is precisely what a turbocharger supplies. Max speed is 121mph, zero to 62mph takes 11.6 seconds and the Combined Cycle fuel consumption is officially 42.8mpg — my test figure was close enough at 38.8mpg. With CO2 emissions of 140g/km, road tax is Ł115 a year and company car drivers will pay 17% BIK tax.

But the engine to go for is the 1.7 CRDi turbodiesel with BlueDrive. This serves up 134bhp with 240lb ft of torque from 2,000rpm; zero to 62mph takes 10.6 seconds and the maximum speed is 124mph. While not the most flexible or responsive diesel unit available today, it is nevertheless smooth and refined. The official combined consumption is 62.8mpg and on test, driven on most types of roads and in stop-start traffic, this diesel version returned 50.7mpg.

Best of all, the CO2 emissions are just 119g/km so you pay nothing for your first year's road tax; and after that it's only Ł2.50 a month (Ł30 per annum). Until next April, company cars drivers will only be stung for 13% BIK tax but this will, if the Government's proposed higher charges go ahead, increase to 18%.

The 'for' list is long; the 'against' list short — namely that while you do get fuel- and CO2-efficient engines they don't have class leading refinement, and Stop & Go is not standard on all versions. And, as also mentioned, the rear seats don't fold completely flat.

But with good looks, huge interior space, a high specification and high build quality, long warranty and five-year customer care package and, most of all, low taxes and attractive prices, in its class the Hyundai i40 Tourer is hard to better. — David Miles