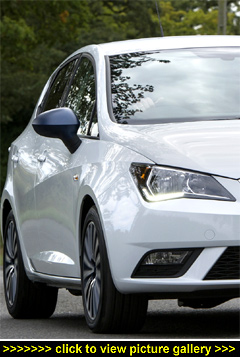 THE NEW MODELS ARRIVE with keen prices — on average just 3% higher than the models they replace — with a range of new EU6-compliant engines, much improved interior quality, improved ride comfort and more gadgets or technology, although the exterior styling changes look minimal.

Prices start from Ł10,000 for the SC versions; from Ł12,315 for the five-door Hatchbacks; and ST estates are available from Ł13,015. I counted 32 different models listed in the latest price list boosted by a wide range of engine options and a lot of specification choices: E, S, SE, Toca, Vista, Connect, FR and the FR Red Edition although the availability varies between body styles. Cupra versions join the range in January 2016.

There are six petrol and three diesel engines, six of which are completely new, again depending on the model chosen. These range from a 1.0-litre three-cylinder petrol developing 73bhp (75hp) plus there are 95 and 110hp turbocharged versions of the same engine which offer better performance, improved fuel economy and lower emissions.

There are also four-cylinder 1.2-litre TSI turbo petrol 90 and 110hp units and a 1.4-litre Eco TSI 150hp four-pot petrol engine. For diesel fans there is plenty of choice: 75, 90 and 105hp 1.4-litre TDI turbodiesels with the 75hp TDI Ecomotive being the cleanest in the range — 88g/km CO2 emissions alongside 83.1mpg in the official Combined Cycle.

SEAT UK says they expect to sell around 22,000 Ibiza models in 2016; 44% of them will be the SC three-door with 53% taking the five-door Hatchback versions and just 3% opting for the ST estates. Typical UK buyers are split 51% female and 49% male with the largest proportion in the 25-to-34 age category.

And it's the model I drove at the recent UK media launch. Starting from the outside, the slightly revised body retains the chiselled look with sharp styling lines, and the long wheelbase with short overhangs continues as before. LED driving lights are standard from the SE spec upwards. Depending on the trim level, there are six exterior colour pack options.

Inside there is a much more obvious improvement in terms of quality and specification. Most of the plastic trim around the fascia and door panels is now soft-touch which has replaced the cheap-looking hard plastic trim of previous versions. There is a sportier Leon-style steering wheel with control buttons, new dials and colour packs for the steering wheel, air vent surrounds and upholstery.

In line with other manufacturers in the supermini sector, SEAT has introduced higher and more advanced infotainment and connectivity functions through their new SEAT Full Link, Mirror Link and SEAT Connect systems which use Smartphone connectivity and Apps via the touchscreen.

Another big improvement is in ride comfort. SEAT, with their strong motorsport heritage, have always liked to offer a firm, even hard, ride for even their most popular models. Not anymore; comfort is a new proposition — and it's very welcome.

The ride is now more compliant by a large margin and it hasn't, thankfully, reduced the Ibiza's ability for nimble and sharp handling with good body control during higher cornering speeds. The steering is light and the brakes well balanced and predictable on wet or dry blacktop.

The five-door Hatchback models seem to offer the best mix for price, space and usability. Although the three-door SC versions have the same 292 litres of boot space as the five-door Hatchback, they offer very little rear legroom. Neither are the less popular ST estates any more spacious for passengers than the five-door models although they do, of course, have a larger (430-litre) load capacity.

Expected to be the main-selling engine, the 1.0-litre, three-cylinder normally-aspirated petrol unit serves up a modest 73bhp and 70lb ft of torque at 3,000rpm. Mated to a five-speed manual gearbox, top speed is 107mph but the benchmark zero-to-62mph needs a lengthy 14.8 seconds.

The Combined Cycle fuel consumption is officially 54.3mpg and on test using A and B country roads it returned 47.1mpg. The CO2 emissions are 118g/km so first year road tax is Ł0 and thereafter Ł30 for subsequent years. This three-pot unit appeals most because of its purchase price — with the Vista spec in five-door Hatchback form it costs Ł13,445. However, this engine is no more than competent and is short of mid-range response.

A much zippier unit, which is far more responsive, is the all-new 1.0-litre Eco TSi turbocharged, direct injection, three-cylinder petrol unit with 93bhp (95hp) — the real gain is the 118lb ft of torque on tap from just 1,500rpm. Top speed is 119mph and zero to 62mph takes a much brisker 10.4 seconds.

Its official fuel economy is 68.9mph (51mpg on test) with CO2 emissions of just 94g/km making it more fuel- and CO2-efficient, more responsive — and completely free of road tax. The downside is that this engine does not come with Vista specification, only the lower SE level, and costs Ł530 more to buy in the five-door Hatchback body.

Even though the insurance is higher at Group 13E instead of Group 8E for the non-turbo unit in the Vista version, I would gladly pay the extra because of the more responsive performance, better real-life fuel economy, and greener CO2 emissions.

With a wide range of bodystyles, specification levels and engine options, the new Ibiza has been improved in some important areas and offers keen pricing, sharp exterior looks, vastly improved interior quality and finishes, and a far more compliant ride. The 75hp engine lacks midrange response but for not much more money the new 1.0-litre 95hp turbo petrol engine is a far better choice plus it also costs less to run.

Even so, the heavily refreshed Ibiza has a tough sales task in a growing, discounted and price-led supermini sector. The best-selling Ford Fiesta still leads the way with the highly rated Skoda Fabia popular because of its cheaper price. Then, just to name a few, you have VW's Polo and Vauxhall's Corsa ranges, both strong contenders for you money in a buyer's market. — David Miles