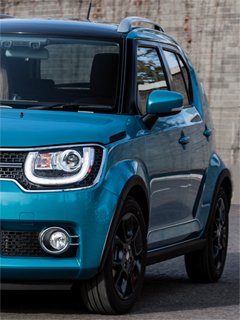 “Suzuki’s all-new, high-ridin’ Ignis
is a charismatic mingling of both
city car and baby SUV — and you
can have it with, or without, Suzuki’s
on-demand four-wheel drive...”

MEASURED from the tip of its voguish nose (capped stylishly by a short clamshell bonnet) to its pert, vertically-cut tail, the Ignis is a city-friendly 3.7 metres long. With jacked-up ground clearance and an SUV stance, and metallic black alloy wheels housed in fluently flared wheelarches, the Ignis sports all the right crossover cues.

Finished in attention-grabbing Flame Orange Pearl metallic, our test car was undeniably distinctive — and you could put one on your drive for a very un-SUV-like Ł11,999.

Choosing an engine is made simple by the fact that there's only the one: but it's enough. An unleaded-drinking, 1.2-litre, it puts out a useful 88bhp and 88lb ft of torque. Suzuki's Dualjet is a lively little four-pot that's happy to be revved out, serving up the 0-62mph sprint faster, it feels, than what the paper figures tell you (11.8 seconds).

While its bhp and torque numbers might appear modest, the Dualjet's only got a lightweight body mass to move — more about this later. It helps, too, that the five-speed manual 'box has a well-stacked set of ratios allied to a light and precise change action that adds even more satisfaction to the 1.2-litre's 'drive-me' nature by keeping it responsive through the gears.

In fact, whatever roads we tackled — from twisty country lanes to quick B-roads, there was a minimal amount of cog-swapping. If, however, changing gears if something you'd rather not do you can, for an additional Ł800, buy yourself an SZ-T fitted with Suzuki's Auto Gear Shift that, helpfully, has a manual mode for those times you want to be totally hands-on.

Another appealing figure for many will be the official Combined Cycle's 61.4mpg (51.3 urban; 68.8 extra-urban) — in real-life, and driven with our usual gusto, 'our' SZ-T returned an acceptable 54.7mpg.

CO2 emissions are a low 104g/km but under the new VED rules even greener cars are taking a hit, so you'll have to hand over Ł140 to the DVLA for your first year's road tax followed by another Ł140 every year after that.

The SZ-T model, which, incidentally, is the Ignis-of-choice of almost half of UK buyers, makes do — quite persuasively, as it happens — with front-wheel drive. If you must have 4WD you'll need to climb to the top of the Ignis line-up for the range-topping SZ5 ALLGRIP version.

Inside, much as you'd expect given the external cues, you'll find elevated seating positions that deliver fine visibility and a feeling that you're actually sitting in a bigger car. Combined with a compact footprint this makes the Ignis a pleasantly usable city machine. The well-shaped, lightly-bolstered seats with patterned centre panels are upholstered in a smart fabric and proved great to sit on for hundred-mile journeys. The driver gets seat height adjustment and both front seat users enjoy a surprising amount of foot- and leg-room topped by generous headroom.

The cabin is cool — and we're not just referring to the AirCon with pollen filter here, but the interior ambiance that's boosted by a two-tone dashboard and door panels and cheeky touches such as the hi-gloss metallic orange door pulls and centre console that match the external paintwork; good use is also made of high-gloss black and flashes of chrome along with contrast stitching on the seats.

The SZ-T's infotaiment system incorporates a large seven-inch touchscreen display that can even be operated when you're wearing gloves! Sharp 3D mapping with easy-to-distinguish landmarks and clear street names make losing your way impossible!

The system is also equipped with a rearview camera plus the instrument cluster's dials are clear and easy to read, with prominence given to the central speedometer.

MirrorLink is on hand to synch your smartphone's apps via the touchscreen, allowing you to access all your mobile's features while on the move.

Android Auto is pre-loaded and will hook you up with Google services such as Google Maps and Google Search. iPhone users get Apple CarPlay to obtain directions optimised for traffic, make calls, send and receive messages, and listen to music. Also part of the Comms package is an MP3-compatible CD player, DAB digital radio, integrated Bluetooth, and two USB ports.

The SZ-T differs from other Ignis trims in that instead of a three-seater rear bench the SZ-T comes fitted with two individual sliding and reclining rear seats that make it a fully-fledged four-seater. Access is good — the doors open to almost right angles so getting in and out is especially easy — and once seated there's decent knee room and masses of foot room and space to really stretch your legs. The 50:50-split folding back seats — which slide up to 165mm — let you fine-tune passenger legroom as well as offering a multiplicity of luggage configurations.

For passengers, travelling in the rear of the SZ-T is a perfectly fine way to go, with full-grown adults comfortable on long journeys. There's a fist of room between the roof lining and heads even though the seating is higher than that in front — and the backrest angles can be set for some serious lounging. And if you've youngsters on board then you'll be glad of the childproof rear door locks and Isofix child seat anchorages.

The rear windows on the SZ-T are of the wind-up variety — the good news, at least for fresh-air fiends, is that the tinted glass winds all the way down into the door. We should also mention that the back seats were popular with all of our passengers, who had only good things to say abut them.

An easy-rising wide tailgate that opens high enough to safely clear your head makes loading and unloading the 260-litre boot a hassle-free task; there is a lip to load over — it's about seven inches down to the boot floor, but it's not a problem. Drop both rear seatbacks (they fold totally flat and will slide folded up if that's more convenient) and the loading space doubles to 514 litres — if you need to load to the roof, it doubles again, to 1,100 litres.

And if you prefer to tow your loads rather than lift them in and out of the boot, the Ignis will pull a braked 1,000kg. Impressive for what is technically a 'city car'.

The Ignis sits on Suzuki's all-new small car platform and it's notable for its very low kerb weight — the SZ-T weighs-in at just 855kg (the lightest Ignis at just 810kg). This is down to the latest high-tensile steel construction methods and benefits both the Ignis's dynamics and its economy.

While its 180mm of ground clearance allows the Ignis to tackle muddy fields and churned-up country tracks, on the road it feels grippy, nimble, and chuckable — a character set that's made better by its eager powerplant, encouraging you to exploit the good visibility and compact dimensions so you don't have to 'breathe in' when clipping along secondary roads.

Despite its compact footprint and lighter than average city car bodyweight it also felt at home, and rode well, on busy motorways, where it's also quiet cruising at the legal limit; however, keep the speedo needle pointing around the sixty-ish mark and you'll definitely stay on the smiley side of 50mpg. Rolling on 175/60 rubber benefits the ride, which is perfectly fine for a short-wheelbase crossover.

The Ignis is a distinctive and likeable baby SUV with lashings of kerb appeal, plenty of kit, and versatile inner space. Best of all, you're unlikely to see less that 50mpg. ~ MotorBar