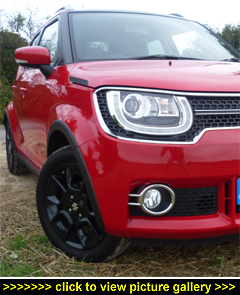 “If you want to stand out then you
really should get behind the wheel
of an Ignis. With its downright cool
SUV-style and city-friendly footprint
you won’t find anything else as big
on personality for the money...”

Plus the price is nice. Very nice. The entry model comes in at around Ł12K and even the frugal hybridised all-wheel drive model will give you change from Ł16K. As usual with Suzuki, there's also plenty of kit thrown in, which all adds up to a lot of car for your money.

The one and only engine on offer is a four-cylinder 1.2-litre Dualjet petrol-drinker with the option of some fuel- and emissions-reducing mild hybrid technology known as SHVS (Smart Hybrid Vehicle by Suzuki).

This compact and lightweight hybrid unit adds just 6.2kg to the overall kerbweight and incorporates an Integrated Starter Generator that functions as both generator and starter motor. Belt driven, the ISG assists the engine during pull-aways and acceleration and also generates electricity through regenerative braking (a compact high-performance lithium-ion battery sited under the front passenger seat stores harvested energy). And it all works splendidly — despite being equipped with 4WD, over the course of a pretty punishing eight days 'our' Ignis returned a very worthy 55.2mpg.

As far as having just the single engine choice goes, it's not a problem. The four-pot Dualjet puts out 88bhp backed up by 88lb ft of torque. While that might not sound earth-shaking the Ignis has a hidden trump card to play — a light kerbweight. The proof of the pudding is, as they say, in the eating. Or, in the Ignis's case, the driving. And it's definitely keen to please: the 1.2 four-pot has a 'rev-me' nature and is more than happy to be worked — the 0-62mph time comes up in an enthusiastic 11.5 seconds (but feels quicker).

And thanks to the well-stacked set of ratios in the five-speeder manual 'box combined and a slick cog-swapping action, keeping the Dualjet in its sweet spot is a joy. In town that makes for a keen and zippy drive. At higher speeds, motorways are cruised well enough to make this little hottie something you'll be happy to slip away with for the weekend.

Reviewers often use the clichéd 'Tardis' analogy when describing some car interiors but when it comes to the Ignis this is no exaggeration — Suzuki has managed to carve out an impressive amount of space within the compact 3.7-metre bodyshell. Inside it feels amazingly spacious — the high roofline helps — and there's hat-wearing headroom and enough shoulder- and leg-room to keep six-footers happy.

It's also rather chic, with more pizzazz than many far more costly crossovers. A two-tone black-and-white treatment for the dash and doors with metallic gold retro-style door pulls and matching lower centre console, along with carbon-fibre-effect air vents, jazzes it up even more. The central infotainment touchscreen is set prominently in the dash making it easy to take-in at a glance. You sit commandingly high and visibility to all points of the compass from behind the wheel is excellent, and together with its 1.7m width makes threading through tight gaps a breeze — so, none of that 'breathing in' when fighting your way through city traffic or zipping along country lanes.

It helps, too, that you're sitting in a supportive, well-shaped chair with effective bolstering that's not so trackday hard that you can't easily get out. The smart fabric upholstery makes a pleasant change from the usual leather; better still, it's warm in the winter but won't burn you after the car's been sitting in the sun all day during the summer. More good news: the seats remained comfortable even on hundred-plus-mile trips. Occupants don't go short of in-cabin storage either, with siamesed dual-use cupholders, a practical high-sided open central tray, an accommodating split-level glovebox, and bottle-holding door bins.

Comms — the undisputed hub of any car these days whatever it's size or status — are up to speed with a seven-inch touchscreen infotainment/navigation system complemented by Apple CarPlay and Android Auto for hooking up your smartphone, as well as for granting access to Google Maps and Google Search. The SatNav is particularly easy to use with both voice and finger input, 3D mapping, easy-to-distinguish landmarks, clear street names, and spoken directions you can trust supported by graphic prompts on motorways and tricksy roundabouts. There's also voice control for the media and phone.

The instrument binnacle is fuss-free and the wide range of driver information is easy to take in on the move. The panel gives prominence to the central speedo (posted speed limits are shown on the active mapping); to its left is a multi-mode driver information display. A DAB radio, Bluetooth connectivity, and USB and Aux ports take good care of your 'sounds' needs.

You'll feel safe in an Ignis because not just because it has a five-star EuroNCAP safety rating but because it has autonomous emergency braking that will apply the brakes if you don't respond quickly to an impending collision warning. It also has a full complement of airbags and useful stuff such as the speed limit displayed on the mapping that turns red if you accidentally go faster. There's also an electronic stability program, and lane departure warning, hill hold control, LED headlights with integrated LED daytime running lights, auto lights, tyre pressure monitoring, and height-adjustable front seatbelts. And not forgetting the AllGrip four-mode four-wheel drive system.

Unexpectedly, given its compact footprint, things are pretty hunky-dory in the back too. Access is good — the doors open to almost ninety degrees so getting in and out is easy. Passengers sit higher by about six inches than those up front and enjoy fine views out, plus there's enough foot and legroom to go around — legally it's just two in the back as there are only two seatbelts, but then few compact crossover buyers will be expecting a Noah's Ark.

The backrests are split 50:50 with adjustable recline which makes a big difference; even more appreciated are the individually sliding rear seats which can each be moved fore/aft through just over six inches to maximise either rear legroom or boot capacity. Full-grown adults will definitely be able to relax on long journeys and those with youngsters tagging along will be glad of the childproof rear door locks and Isofix child seat anchorages. Bottle-holding door pockets, a central cupholder, and a front seatback pouch take care of any oddments.

The Ignis is relatively softly sprung and rolls on not-so-low-60-profile comfort-orientated rubber which benefits the ride on less than perfect blacktop. The ever-present speed bumps are crested smoothly, and let off the leash on motorways, progress is both flowing, assured and quiet. This compact little SUV just keeps on giving!

Suzuki is renowned for its compact-car know-how and 4x4 expertise, and in the Ignis they come together beautifully. The Ignis is also light (the heaviest, the SZ5 AllGrip, weighs-in at a mere 920kg). Combine that with its city-car dimensions — and nicely weighted steering along with brakes with bite — and the Ignis proves to be satisfyingly agile and decidedly chuckable, especially around town where the Dualjet four-pot is always game.

Quite a bit of our test was spent deep in the countryside and the AllGrip-specced Ignis felt totally at home, coping reassuringly with the narrow twisties along with roads muddied and slimed with silage (don't laugh; it's as lethal as ice!) from farm vehicles. There's also 180mm of ground clearance so you can stray from the beaten track as easily as crossing muddy fields. You can also rely on Hill Descent Control and Grip Control assists.

Grip Control activates on slippery surfaces at speeds of less than 18mph, focusing torque on the driven wheels that have grip and applying braking to a spinning wheel. Hill Descent Control activates when the vehicle is travelling down an incline at under 15mph in first or second gear. For the record, the AllGrip is a self-managing permanent four-wheel drive system that automatically transfers additional torque to the rear wheels when required, thereby further enhancing the Ignis's already confident cornering ability.

From the outside it's easy to underestimate the room on the boot side of the tailgate. An unforeseen chore saw us having to shift a vast amount of household stuff — but it wasn't a problem; loading was easy thanks to the high-rising tailgate that opens onto the 204-litre boot. 2WD versions do even better, with 260 litres as they don't need to accommodate the 4WD's rear differential.

Owners planning weekenders or far-afield active lifestyle trips will find all the space they need (don't forget those sliding, boot-extending rear seats). Also handy are rear backrests that sit perfectly level when folded down and increase the boot to a 1,086-litre loadbay — a very good size for this class. If you'd rather tow your cargo, then the Ignis will pull a useful 1,000kg braked.

City-slicker-cum-crossover with 4x4 off-road ability and a dash of hybrid thrown in, the Ignis appeals on many levels. Throw in the versatile rear passenger/cargo mixability and low running costs and Suzuki's cheeky compact crossover ticks all the boxes. Along with taking the family staycation in its stride, it's a hoot to drive. Small physically it might be, but for everything else, especially fun, it's Big! ~ MotorBar