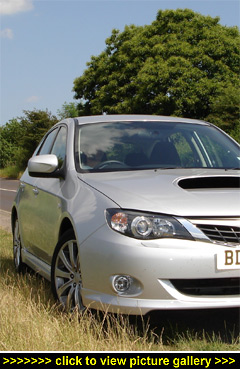 “Subaru is boxing clever with its
turbodiesel-powered, five-door
Impreza hatch. It may not be as much
of a road-racer as some of its stable-
mates, and it sips rather than slurps
the fuel, but it’s as surefooted in all
weathers as its rally-bred brethren...”

SUBARU'S NEW-GENERATION IMPREZA LINE-UP still boasts some very fast cars — the fastest of them all being the Ł49,995, 395bhp Cosworth version that rockets off the line to 62mph in an adrenaline-pumping 3.7 seconds.

However, for every 'Scooby' fanatic out there who'd give anything to put a 'Cozzie' on their drive, there are thousands who want nothing more than 'sensible' — a sensible set of wheels with all-wheel drive for the Bad British Climate, with a sensible hatchback body and, you guessed it, a sensible diesel engine.

Not so long ago all these sensible buyers would have had to look elsewhere because Subaru didn't make a diesel-powered Impreza. All that has changed because there's now a 'sensible' Impreza. It comes with a 148bhp 2.0-litre 'boxer' diesel engine which, while not as speed-orientated as its go-faster siblings (top speed is 127mph with 0-62mph in 9 seconds), can still cut it on the dynamics front. It costs between Ł21,495 and Ł23,745 depending on which trim level you choose; RC or the higher-spec RX with leather seats and keyless entry.

The headline figure for Impreza diesel customers will be the 47.9mpg average fuel consumption, which gives a potential range of 670 miles on a full tank. Horizontally-opposed powerplants (so-called 'boxer' engines) have, along with permanent all-wheel drive, always been a Subaru 'given'. Nothing's changed — Subaru's new diesel model is a flat-four-powered 4WD.

The benefits of this engine design are obvious the moment you pull away. Thanks to the boxer configuration, the turbodiesel is far smoother than a standard straight-four diesel; refinement is good and the dreaded diesel 'rattle' noticeable by its absence.

It's generally a pretty quiet engine and you only really hear it when you're cosying up to the 4,700rpm red-line. With peak torque of 258lb ft on tap between 1,800 and 2,400rpm, and a turbo that builds thrust smoothly from low revs, the all-aluminium 2.0-litre unit pulls easily in all gears and with a willingness to rev rarely found in diesel engines.

On the road this makes for a relaxed drive and good mpg figures — over a week-long test, quite a bit of the time travelling four-up, we recorded an average consumption of 46.9mpg. Imprezzive! If you're not in a 'sensible' mood you can always drop down a couple of gears and give the RC some wellie, in which case the turbodiesel will be more than happy to play along. Speedy or sedate, the 2.0-litre boxer engine always responds eagerly.

The manual gearbox's six ratios are well chosen: the lower four are great for pro-active progress; the top pair, backed by the ever-ready torque and comfortable ride, make for relaxed and economical motorway cruising — where, incidentally, the 2.0-litre diesel officially returns 54.3mpg.

The cabin is well put together and nicely finished and, livened up by chrome touches and blue mood lighting, is a pleasant place to spend time. Made better by the decent sound system which comes with a high fidelity 10-speaker set-up.

Clear white-on-black dials look smart and the three-spoke leather-rim wheel has remote controls for the audio and cruise on its horizontal bars. The climate control air conditioning is highly effective: even with the outside temperature in the high twenties it chilled the interior within moments of switching on. Good-sized power-fold door mirrors provide a first-rate view of what's coming up behind.

The five-door Impreza is spacious enough to accommodate four adults — including, thanks to the high rear roofline, two six-footers in the back who will also enjoy nicely-padded outer armrests.

While the rear cabin is roomy, and three across the shapely back seat do-able, the middle position is best for children.

In the front are high-backed sports seats — firm and supportive, especially around the lower back and the shoulders, their light bolstering proved very effective and they really were comfortable on long journeys. The seat bases are also longer than normal and provide good under-thigh support. If you're a near-six footer sitting in the front, you'll have a good five inches of air between the top of your head and the roof lining. Pretty good for this body style.

The fabric upholstery, brightened by metallic-effect black centre panels, not only looked good but stayed cool in the hot weather — and thanks to the two-stage seat heating should prove equally welcoming during the winter months.

The driver benefits from a height-adjustable seat as well as a one-shot up/down window — all four windows are electric. The driver also enjoys a fine driving position offering first-rate visibility helped by slim A-pillars. Rearward visibility through the back screen is partly hampered by the rear headrests, which do not drop down over the seatback when not in use — if they bother you, you'll need to physically remove them.

Cabin cubbyholes and storage is good, with cup-holders and practical door pockets designed to hold 720ml bottles. For those who prefer to listen to their favourite sounds on their MP3 player, there's a 12-volt supply and aux-in socket in the lidded bin under the centre armrest. The glovebox is unusual in that, like the four grab handles above the doors, it is damped — a nice touch that stops it banging the passenger's knees when opened.

Boot space is a useful 301 litres with luggage concealed beneath a roller cover. Folding down the 60:40 split rear seats is simple: just pull the releases on the seatbacks and they drop forward to form a flat 1,216-litre load bay for those inevitable 'do I have to' trips to the tip or garden centre. There are also tie-down eyelets and bag holder hooks for the family's weekly shop. Beneath the lift-up boot floor you'll find a fully-fitted storage tray containing a puncture repair kit, tools and towing hardware — and room to spare for your own bits and pieces.

And if you think that going diesel means missing out when it comes to looks, you're mistaken. Boxer Diesel models have smart ten-spoke alloy wheels, smoked headlight covers over silver projector lights, LED tail lights, the trademark Impreza power bulge in the bonnet, colour-coded mirror skins and door handles, neat but noticeable side sill and front apron extensions, a splitter below the rear bumper and a large diameter tailpipe to keep others motorists guessing.

The diesel-powered Impreza is an easy and pleasurable car to drive fast or slow, although the gear change action could be crisper. And while Subaru's standard-fit symmetrical all-wheel drive ensures you have maximum grip 24/7, you never notice the 4WD system working apart from the fact that you're always aware of the car's surefootedness. The front-to-rear torque split is, incidentally, normally 50:50 but the system will instantly divert power from the wheels that slip to the wheels that grip.

If you wish to test the traction then floor the accelerator: take-off from standstill is strong, with no scrabbling even on slippery surfaces and the Boxer Diesel laughs in the face of bad weather, apportioning grip whenever and wherever it's needed. The electric power-assisted rack-and-pinion steering is well weighted and on the move the car feels tidy and assured, especially threading through corners, where it stays reassuringly flat.

The RC runs on 17-inch 205/50 Yokohama Advan tyres that do a fine job for grip as well as comfort. Disc brakes, vented at the front, are fitted all round and they perform their duty as efficiently and as unobtrusively as does the four-wheel drive system.

The four-wheel fully independent suspension set-up delivers a workable compromise between handling and comfort — a good middle ground that's neither too firm nor wallowy soft — and is compliant enough to ride over most bumps and potholes without disturbing the passengers.

All things considered, the Impreza Boxer Diesel makes a characterful alternative to run-of-the-mill mainstream family hatchbacks from the likes of Ford or Vauxhall, or even Audi and VW, especially if you want the security of all-weather, all-wheel drive but have no desire to be seen behind the wheel of an SUV. — MotorBar