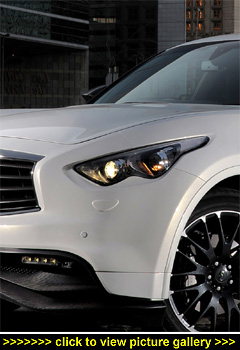 “How’s this for timing? The day after
Sebastian Vettel is crowned the
2012 Formula 1 World Champion,
I’m sitting behind the wheel of a car
named after him. Sadly, the man
himself has not turned up to show
me the car personally. I don’t know,
some people!”

WELCOME TO THE NEW INFINITI FX VETTEL EDITION. The idea for this F1 driver-badged car started when, as a Red Bull sponsor, Infiniti asked Vettel about a personal car. He took a look at Infiniti's range and the obvious choice was the FX, which Infiniti kindly agreed to radically alter to please the German driver.

The result is that, after two years of development (with Vettel involved throughout), you can buy your very own Infiniti FX Vettel Edition. But will it please us as much as Herr Vettel?

It certainly looks the part. That swoopy FX shape — and available only in Moonlight White — becomes much meaner with a bunch of aerodynamic tweaks to give it extra downforce at high speeds. All the new bodywork add-ons are, naturally, in Formula 1-grade carbon-fibre.

The new under-bumper front section is supposedly inspired by the design of Vettel's Red Bull F1 front wing. You can also find carbon nestling in the front grille blades, covering the door mirrors and forming the new side skirts.

The wheelarches are white rather than black, and the Vettel Edition becomes the only FX not to have roof rails.

A row of LED front daytime running lights join what are claimed to be the smallest LED foglights ever homologated. Now there's a fact to bamboozle your mates down the pub…

At the back, the rear diffuser incorporates two exhaust pipes and a foglight that echoes the centre rain light of an F1 car. The carbon tailgate spoiler you can see in the photos is an optional extra costing an eye-watering Ł4,500. The net result of all these changes is 30% more downforce than the standard car, and 5% less drag.

Unique BBS 21-inch forged alloys (each weighing 3.5kg less than a standard FX wheel) are finished in black. Three discreet Vettel badges on the car (two on the flanks; one on the tailgate) let everyone know you're driving one of the world's rarest cars.

So much for aesthetics. What about the mechanical side? The only change to the drivetrain is a new exhaust system, which unleashes an extra 29bhp. The 385bhp of the standard FX50's naturally-aspirated 5.0-litre V8 engine is boosted to 414bhp, while torque is also beefed up by 14lb ft to 383lb ft. That makes this the most powerful Infiniti ever made.

To test this, you need to open up a Vettel-branded carbon-fibre flap in the centre console and locate a glowing blue-tinged button underneath it. I'm a born button-pusher, and I'm delighted to say that pressing this particular button has an immediate effect: it opens some flaps in the new exhaust system and unleashes the full sound-effect arsenal — a classic tuned V8 roar.

Frankly, though, it's more about the sound than the fury. Yes, this is a quick car: its top speed remains limited at 155mph but acceleration is 0.2 seconds quicker to 0-62mph, taking 5.6 seconds. But it's not supercar-quick, which you might reasonably expect when you're shelling out the far side of Ł100k on a car.

What about handling, though? It should be sharper thanks to new harder springs that lower the ride height by 20mm. However, that's the only change.

The day of my test drive happened to coincide with the worst flooding of the year in Britain, so the test route through winding country roads felt more like a boating trip down the river. It also plastered the car with mud — sorry about that, Infiniti.

So my opportunity to appreciate the handling was slender indeed, but to me the car felt too similar to a regular FX50. In other words, very comfortable, but not the last word in handling sharpness. The only real difference I noticed was a little less squat and a little less body roll around the bends.

At least you can luxuriate in the Alcantara-trimmed cabin, which is apparently to Sebastian Vettel's own taste. The suede-style stuff covers the seat centres, A- and B-pillars and the rooflining.

These special edition cars are built in Japan and then shipped to Vettel's homeland (Germany) for conversion by CRD (Car Research & Development, part of Brabus). Only 150 are being made: 50 for Europe, 50 for Russia and 50 for the Middle East.

The UK will probably get just 10, priced at Ł100,800 a pop. That's Ł35K more than the standard FX50 S — but don't think of this project as just metal (and some carbon-fibre!). Instead, owners get a whole load of 'experiences' thrown in.

For example, Sebastian Vettel himself is on hand at VIP hospitality events for owners, driving them around race tracks. Other events include passenger rides in a three-seater F1 car and driver training from star drivers.

The first car will be delivered to one Mr Vettel in March 2013, with other owners receiving theirs soon after. Until then, buyers can track the production status of their car on a bespoke Infiniti iPad — surely the world's most exclusive Apple product. — Chris Rees