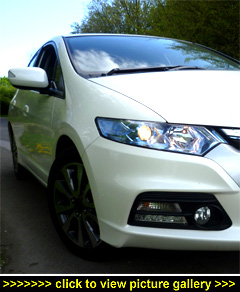 “Despite the naysayers, hybrids are
here to stay. So get over it... or
get into one. So far as all-electric
vehicles go, ‘range anxiety’ is still
the bogeyman. But ‘no fear’ hybrids
— fitted with essential range-
extending petrol or diesel engines —
are seriously worth considering
if you want to grow that spark of
green in your conscience...”

HONDA'S INSIGHT IS JUST such a one. Externally it's an aerodynamic-friendly five-door family hatchback. Under the bonnet sits a 13bhp electric motor and a 1.3-litre petrol engine working in a power partnership Honda calls Integrated Motor Assist. The bottom-line benefit of this arrangement is that IMA greatly improves the fuel economy (officially 65.7mpg combined) and keeps CO2 emissions Earth-friendly, at 99g/km.

The Insight's electric motor doesn't drive the wheels directly but is there in a generator capacity to recharge the lithium-ion battery pack; its primary roles are to maximise fuel efficiency and supplement engine output by boosting torque.

An often overlooked major benefit of supplementing petrol with electric rather than with diesel is low NOx (oxide of nitrogen) levels. While modern diesel engines do reduce CO2 emissions, they also emit very high levels of NOx and particulates (PM) which in turn require soot traps (or diesel particulate filters) to clean them up.

However, electric-petrol hybrid cars have low CO2 emissions as well as the high economy of a diesel engine but without the nasty NOx and PM.

If you spotted that the combined figures of 96bhp and 123lb ft are not the exact sum of the electric motor's and the petrol engine's peak outputs, well done! The reason is because the engine and the motor develop their peak power at different points in their respective rev bands. This is not something the average driver should worry about. For most of us, 'how' and 'why' are not as important as the real world results — so, staying with the universally accepted benchmarks, zero to 62mph takes 12.5 seconds (it feels quicker) and the top speed is 113mph.

Apart from the unseen (and unheard) electric motor, the only other clue to the Insight's hybrid make-up is the dash. Some have called it futuristic but in reality it's simply neat and grounded in practicality — a useful amalgamation of traditional switchgear and dials along with easily interpreted colour-themed readouts and graphics that let the driver oversee how the hybrid powerplant is performing.

Before stepping inside, spare a moment to appreciate the Insight's well-groomed lines, in particular the steeply-sloped bonnet and front screen. Side glazing is long and visually slimming, with small quarterlights ahead of the door mirrors to enhance visibility. Look critically and you'll notice what most observers miss — the clever and almost invisible point where the roof becomes the near-horizontal rear screen. It's not something just down to the zen-like attention to detail of Japanese craftsman — it also calms the air rushing over the car at speed.

The Insight's distinctive tail is defined by the near-vertical glass panel forming the lower section of the tailgate and the sharp-cut, high-reaching quarter panels embracing the triangular-shaped rear light units.

Inside it's easy to physically feel at home. The shapely, well-bolstered seats are low-slung and trimmed in part faux leather with fabric centre panels and separated by a lidded armrest that's set at just the right height for the front passenger's forearm. The seats are also heated, accommodatingly wide and benefit from good built-in lumbar support.

A decent driving position is quickly set with the conventional auto-style selector lever for the CVT falling conveniently close to your left hand. While the tailgate design is striking, the upper section of the rear screen meets the upright lower glass panel in a joining bar that blocks out a narrow horizontal strip of the view behind — something you need to get used to when checking your six o'clock.

Behind the steering wheel is the main instrument cluster which consists of a circular analogue rev-counter with a gear indicator flanked, on the left, by an electric charge meter and, on the right, by the petrol engine's fuel gauge. A driver's information display occupies centre-field of the rev-counter.

Clearly visible just above the upper rim is a large digital speed readout, the background colour of which changes from green (high fuel economy) to blue (low economy), reflecting how fuel-efficiently you're driving.

The good-to-hold leather-rimmed multifunction wheel carries remote controls for the driver's information, audio, and cruise control. Hi-fi buttons and switches are large and fuss-free to operate on the move; so too are those for the climate control.

The Insight's cabin is pretty relaxing whether you're cruising motorways or pootling through town traffic — and even more so if you switch to Econ mode as doing so smoothes out the CVT changes. It's also agreeable to live in thanks to efficient air-conditioning and ample room for personal items in the large glovebox and big door pockets.

Nothing out of the ordinary is called for to start this particular hybrid — insert the key blade, and twist. Then press the release button on the side of the selector and pull back to Drive, just like any normal auto. So far, so straightforward. Even the handbrake is a traditional — not electrically-operated — item.

Other CVT choices are S (Second, not Sport) for more power when climbing gradients, or setting off on a slippery or snowy surface, as well as stronger engine braking; L (Low) delivers even more power and maximum braking on throttle lift-off.

For a more hands-on driving style there are paddle-shifters (left side 'down' and right side 'up') on the steering wheel. The shift indicator on the instrument panel keeps you permanently informed as to your current mode and gear — essential in any auto, especially when driving at night.

Drivers on a quest for the 'green' Holy Grail of the best possible ecomony will appreciate the small green button to the right of the steering wheel. Marked 'Econ', it's also imprinted with a graphic of a small plant with leaves. Pressing the green button puts the Insight into 'super economy' mode.

Amongst other things this means optimising engine management, delivering a smoother CVT shift pattern, adjusting the climate control system settings, engaging the stop-start function sooner, and increasing the degree of battery charging during regenerative braking. The petrol engine's power output is also limited, with torque slightly reined-in. In Econ mode the Insight still feels the same to drive — and you can floor the throttle to temporarily regain 'normal' acceleration in an emergency should you need to.

The little green leaves are part of a game you can challenge yourself to while doing your best to drive economically — the more efficiently you drive, the more leaves will grow on the plants in the Eco bar appearing in the on-board computer display; if you're 'green' to a saintly level, the plants will even blossom! Dedicated gamesters can view their real-time and overall journey scores. For the truly hooked, there's even a lifetime score…

Your 'score' is one of numerous more everyday-relevant items shown (instant and average mpg, range, door and seatbelt warnings, external temperature, service due dates, etc) but if you just want to get from A to B you can choose not to play. We drove with no real thought of trying to be the best of the best eco-wise — and yet we still managed a very satisfying 55.7mpg.

In the rear cabin, two is the better number for all concerned, particularly as the rear seat is sculpted with a raised 'hump' in the centre There are three rear headrests and seatbelts, so a third is catered for and can travel in the middle spot — ideally that would be a youngster. The outer rear seats afford almost a fist of headroom along with plenty of legroom and feet, even size ten's, won't have a problem fitting in.

Adding to the appeal of travelling in the back are a wide and well-padded centre armrest (with a pair of built-in cupholders; the best kind if you're drinking on the move), bottle-holders in the doors and well-located outer rear armrests.

Behind the 60:40 split rear seatbacks lives a fair-sized (408 litres) boot; not as deep as it could be due to the batt-pack below the floor, but it's still a hungry luggage-eater. Fold the seats though and you'll have 584 litres of flat-floored space. Loading is unobstructed thanks to a high-lifting tailgate. Beneath the floor there's a storage box where the easily-removed luggage blind cassette is stowed when not in use.

On the move the Insight rides well and thanks to light but nonetheless accurate steering it turns in crisply and is surprisingly nimble through corners. Its road manners are polite and it handles reassuringly. Obviously it's no hot-hatch but drivers who like to drive will get some pleasure from their spells behind the wheel.

Add to that a consistent 55+mpg (with the likelihood for green-blooded road warriors to break through the 60mpg barrier), and no mains charging, and the Insight makes for a gentle and undemanding entry into hybrid motoring. — MotorBar