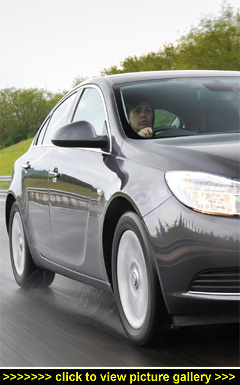 “Eco is best, isn’t it? Not, it seems,
when it’s Vauxhall’s new ecoFlex
Insignia because when it comes
to driving pleasure, it’s the non-eco
version that satisfies the most...”

ALTHOUGH BMW HAS JUST INTRODUCED its new 3 Series 320d EfficientDynamics saloon with low CO2 emissions of 109g/km, low BIK tax rates of 13 per cent and 68.9mpg economy there is no extra cost or loss of performance over the standard 320d Saloon. SEAT have just announced savings (until the end of June) of Ł1,250 to Ł2,000 on their Ibiza, Leon and Altea Ecomotive models but other manufacturers are still charging a price premium for their lower CO2 'ECO' models.

By EU directive all manufacturers have to lower the CO2 emissions of all models in their range. That cleans up the air and makes better use of more and more costly fuel. For the customer that lowers road tax charges and for company car drivers it reduces the Benefit in Kind tax penalty.

There really isn't a justifiable reason to charge more for ECO models over standard ones. Some manufacturers claim that ECO versions have enhanced specification over standard models and technology to lower CO2 emissions costs them more money, so the customers pay.

Given the state of the recession-hit new car market it is good to see that BMW, SEAT and just a few others have taken a reality pill and have priced their ECO versions in line with standard models. This allows customers to reap the cost saving benefits without having to initially pay more for the vehicle.

I have just tried the Vauxhall Insignia 2.0 CDTi 160PS ecoFlex five-door Hatch with 'Exclusiv Nav' specification. The price of this model is Ł22,205. The same model (2.0 CDTi 160PS with Exclusiv Nav trim) but not the ecoFlex version costs Ł21,710: a saving of Ł495. Not as much as some other manufacturers charge over their standard versions, but it is still a higher price to pay, particularly in a declining market.

There are, of course, some significant savings to be had if customers, especially company car users, do choose the ecoFlex version. Over the non-ecoFlex 160PS model the CO2 emissions are lower at 136g/km meaning a road tax bill of Ł110 instead of Ł155; Benefit in Kind company car tax for the driver is 19 per cent instead of 22 per cent; and the official average fuel consumption is 54.7mpg instead of 48.7mpg. However, the retained value over 3-years/36,000 miles is, according to What Car? magazine, lower at 33 per cent instead of 34 per cent which could mean there is less demand as a used car for the ecoFlex versions. And this could mean higher leasing charges for business users.

But for me the most significant reason, other than the inflated price, for not buying this ecoFlex Insignia over the standard version is all about its real-life driving performance. To obtain these good-on-paper CO2 and lower mpg figures the fifth and sixth gearing is so high that it is not a rewarding car to drive on any roads other than traffic-free motorways — and you don't see many of those! The real-world mpg figure returned for my week of driving the Insignia 2.0 ecoFlex Hatch over all types of roads was just 45.4mpg and the driving experience was frustrating and certainly not rewarding, either for cost saving or for useable performance.

As already mentioned, the only time the high gearing of the Insignia ecoFlex works is on traffic-free motorways. The gearing is so high that at 70mph top gear is on the verge of labouring and I had to change down every time the traffic slowed just a little. On A-roads, travelling in the usual 50-60mph convoy, fourth gear was needed — fifth and sixth gears are just too high. And when overtaking, be prepared to drop several gears. At low in-town walking pace speeds, driving in second gear caused the engine to shudder and nearly stall. A modern turbodiesel with its high torque output — 258lb ft in this case — should easily cope with these conditions but not if the final drive and other gear ratios are too high.

The Insignia — the replacement for the Vectra — was the 2009 International Car of the Year and last year it outsold its main rival the Ford Mondeo with 36,000 UK sales giving it ninth position in the Top Ten sales chart. This year the Insignia and its rivals have dropped out of the sales charts, overshadowed by smaller cars and due in part to the Scrappage Scheme.

The Insignia, as an upper medium family or business car, is generally very good. It is a much better product than the old Vectra. The styling is very smart, the build quality is much better and the specification improved. There are a wide range of engines, transmission options and even 4x4 versions. The interior is relatively roomy although the coupe style of the Hatchback does limit rear passenger headroom, boot space and rear visibility but the front 'twin-cockpit' design is first class.

Against: ecoFlex models cost more than the conventional versions, ride is firmer due to less-flexing low-friction tyres and lower ride height, gearing is too high so it offers a compromised driving experience. For: A stylish, well-built and well-equipped upper medium sector car, wide range of engines and equipment levels and most models offer a comfortable ride.

Insignia Hatchback prices range from Ł17,120 up to Ł27,860 and the 'best buy' version is, in my opinion, the non-eco 2.0-litre CDTi 160PS with Exclusiv trim and equipment priced at Ł20,875. It's ride is better, engine responsiveness is better, it costs less to buy and a lighter right foot will return good fuel economy. — David Miles