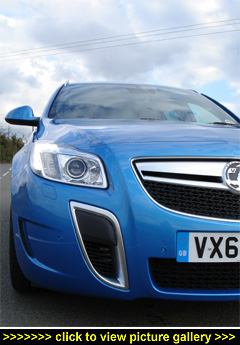 “You have Ł37,000 to spend on a
seriously quick estate car. Audi S4
Avant or BMW 335i Touring?
Or do you play the wild card and
go for something born and bred in
Blighty... like Vauxhall’s Insignia
Sports Tourer VXR?”

NOT THAT LONG AGO it would have been a no-brainer — with a premium German the automatic choice. But things have changed and Vauxhall's fast, well-mannered VXR is a serious contender for your money. And more so because it now comes with a dual-mode, six-speed automatic transmission.

At this price level, looks are a decisive factor in the buying equation. Get them wrong and your customer walks before they talk. But the handsome VXR 'wagon' easily clears the image hurdle. Finished in the can't-miss-me Arden Blue of our test car, the VXR looks fresh off the track from a round of the British Touring Car Championship.

Racheting up the aggression on Vauxhall's hot-to-go estate are deep bumpers, gaping cutaway air intakes at the muscular front-end with a spoiler and fist-sized matt-silver exhausts at each rear corner, lowered suspension and huge 20-inch Y-spoke bi-colour alloy wheels.

Next on the 'must-have' list comes performance bragging rights — how does 320bhp and 320lb ft of torque sound? That easily outdoes the BMW's 306bhp and 295lb ft although the Audi S4 trumps them both with 328bhp and 324lb ft.

On the road, the VXR's brawny power outputs translate into zero to 60mph acceleration in 6.2 seconds. The Beemer and the Audi take less, dusting the 0-62mph time in 5.9 (335i Auto) and 5.4 (S4 Auto). Note that Vauxhall publishes the traditional British 0-60mph figure while the Germans stick with the more commonplace 0-62mph (0-100kph) rating. All three have top speeds limited to a Euro-acceptable 155mph.

The VXR's 320bhp comes from a tried-and-tested turboed 2.8-litre 24-valve V6 — and it's dished up with finesse through the auto box's six ratios. Around the 4,000rpm-mark the V6 really begins to motor; and as the revs rise so too does the V6's soundtrack. While it's a substantial car (it weighs-in at almost two tonnes) and some of its power is absorbed by the torque converter, the standard-fit four-wheel drive ensures that what power does get laid down isn't wasted on wheel-spin.

The auto set-up offers drivers three modes: normal and two performance — Sport and VXR. VXR will be the most regularly indulged purely because it's the most exciting; it stiffens the dampers, dials up unyielding body control, weights up the steering and sharpens throttle response. Alerting you that the beast is unleashed, instrument illumination switches from glowing white to a power-dressing red whenever the VXR button on the dash is pushed. If you want the fastest change to another ratio, use the wheel's paddle-shifters rather than the kickdown.

As you'd expect, the ride firms up with each step up from normal to Sport and Sport to VXR. Like almost all of these driver-adjustable systems, the default settings are often best for everyday driving, particularly as the majority of it in the UK is now done on traffic congested roads. Which is why normal is what most drivers will use most of the time as it lets the VXR lope along at its most comfortable.

When you crave that addictive adrenaline hit you can choose between Sport for 'sporty' and VXR for tied-down and hot-to-trot. Flicking between settings is as quick as you can physically press the appropriate button on the dash. And whatever rate of knots you're travelling at, you can rely on the Brembo brakes — discs all round with massive drilled and vented front discs — to pull you up clean and hard.

Despite the headline power, where the Insignia VXR scores particularly well — and quite unexpectedly — is in the ride department. One look at those massive 20-inch alloys wrapped in 255/35 lo-pro rubber and, knowing the suspension has been lowered by 10mm, you'd bet your shirt that you were in for an unforgiving ride.

On the contrary, the VXR rides smoothly; its well-judged suspension taking road imperfections in its stride and, better still, without any of the fidgeting normally caused by the biggest rims. The result is a very comfortable ride over all roads and for all journeys — the 'Tourer' part of the VXR's name is totally honest.

And whatever the weather, one thing you can be assured of is sure-footed grip. The four-wheel drive system gets the power down without drama — no spinning wheels; and no unexpected line changes when you boot the accelerator exiting a bend. Well-suited, then, to the UK's unpredictable weather.

More good news: turn-in is crisp and accompanied by decent bite from the Pirellis at the front-end, and the meaty, flat-bottomed, leather-wrapped wheel is nicely grippy — with perforated 'work' areas — and just what you need to direct the VXR in press-on mode.

De rigueur for a 'dedicated follower of speed' are the big Recaro sports buckets: they're first rate, with highly effective side bolstering and perforated mesh centre panels; and the built-in lumbar support is very good. The Recaros feature integral headrests so you also get first class shoulder support; superior under-knee and under-thigh support enhances long-distance comfort. Height and reach adjustment of the steering wheel is generous, plus there's electric height adjustment for the front seat bases and height-adjustable front belts.

Equally good is the driving position. You sit low in the cockpit-style cabin, separated from your front passenger by a prominent centre console and deep transmission tunnel. A four-dial instrument set — all with chrome bezels, slim red needles, VXR-exclusive faces and white markings — is complemented by shiny black inserts in the fascia, centre stack and doors plus there's some classy chrome filleting; even the overmats get the VXR treatment, with smart silver-edging.

The 'Tourer' part of the VXR's persona should satisfy most, if not all, of a family's space needs. For a start you'll find a good number and mix of storage solutions throughout the cabin. The rear cabin is very passenger-friendly for adults, with loads of legroom to stretch out in and good backrest angles on the 60:40 split/fold seats. Foot room and headroom are also good, while adding to the pleasant ambience are decent-sized windows that keep it airy despite the black theme.

A wide, well-padded centre armrest makes it home-from-home for two six-footers using the individually-shaped outer sections of the rear bench seat — and also makes available cup-holders and a lidded storage box that doubles as a tray (a large ski-hatch is there should you need it). A third person can take the 'piggy-in-the-middle' spot, even an adult, although best not to when the driver is in VXR mode!

In addition, the Sports Tourer has Vauxhall's FlexOrganiser system for organising and securing luggage using a combination of nets, hooks, straps and storage boxes. If that's not enough, there's more storage space under the boot floor as there's no spare — only a tyre repair kit. You can even select the height to which the power-operated (opening and closing) bootlid will open — it's conveniently operated from the driver's door, by a bootlid button or from the key fob.

Who'd have thought that the terms 'comfortable' and 'eminently usable' could be applied to a VXR model. But it's true — in Sports Tourer guise the Insignia VXR is a monster tamed; and all the easier to live with in automatic spec. It's also a handsome long-distance touring estate that effortlessly doubles, on a daily basis, as a competent and versatile family 'holdall' that averages 24.1mpg (officially 25.7). And whenever the moment comes, a push on that 'VXR' button transforms it into a devilishly effective A-to-B machine. — MotorBar