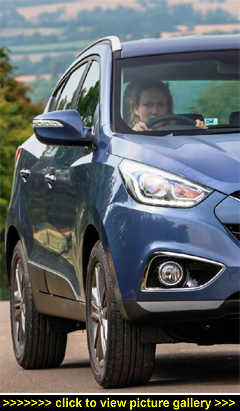 “Winter is the season for SUVs so
it’s timely that the 2014 model year
Hyundai ix35 is now on sale. It’s duly
enhanced with a face-lift, upgraded
spec with a wider range of options,
revised suspension settings for a
sharper drive, and best of all a
cheaper starting price of Ł16,995...”

THE ix35 five-door, five-seater SUV is one of the fastest-selling models in Hyundai's range, and the brand looks as though it's heading for another record year of sales in the UK exceeding the 74,285 total of last year. In the UK in the past three years, around 30,000 ix35s have been sold.

The revised ix35 retains its former three engine option line-up of 1.6 GDI direct injection petrol and 1.7 and 2.0-litre turbodiesels. Both the 133bhp 1.6 petrol and 114bhp 1.7 units are only available with a manual gearbox and two-wheel drive.

To improve fuel economy and lower emissions the revised 2.0-litre turbodiesel unit has had its power output cut from 179 to 134bhp and is, thankfully, available with four-wheel drive plus it has the option of both manual and automatic transmissions.

Hyundai has established itself as a brand offering well-built, smartly-styled cars with lots of specification at competitive prices and all backed up by their five-year Triple Care unlimited mileage warranty.

The revised ix35 continues that trend with LED daytime running lights, redesigned front and rear lights; and the quality of the interior has been improved plus there's also a new infotainment system.

The interior is well laid out; everything in its right place and it is hard to fault. Due to its coupe roofline, rear seat headroom is limited for six-footers and at the front the small seat squabs lack support. There is enough passenger room front and rear with a really practical square-shaped boot of 465 litres and a low loading height sill with wide entry. The rear seats fold almost completely flat to create a 1,436-litre loadbay.

Hyundai has also improved the ix35's existing chassis and suspension set-up to improve handling and ride comfort, which it does in part with only deeper potholes causing some discomfort and unsettling the ride. The latest ix35 also has Flex-Steer which offers three driving modes: Normal, Comfort and Sport. This allows the driver to vary the level of steering support and feedback to best suit them although the response from this electronic system still feels artificial.

However, cornering grip is good even on the two-wheel drive 1.7-litre diesel model I tested. Being a tallish car there is some cornering bodyroll but generally most customers will be more than happy with its performance and comfort.

In these difficult financial times UK customers are still buying cars in ever-increasing numbers but the priorities now are status in terms of looks, comprehensive equipment and value-for-money pricing with affordable running costs.

Above SE Nav are the new Premium and Premium Panorama trims for diesel versions only. Starting at Ł22,595, they are equipped with a host of extra features as standard. On the outside they benefit from 18-inch alloys, Bi-Xenon headlights with self-levelling system and chrome door handles and headlamp washers also come as standard. Inside, the spec includes keyless entry, leather seats and privacy glass. The Premium Panorama additionally receives an electric tilt-and-slide panoramic sunroof.

My revised ix35 model was the 1.7 CRDi turbodiesel manual with SE Nav specification with an on-the-road price of Ł20,995 — but it only has 2WD traction. Company car drivers will opt for the Nav element with its rear-view parking camera included but retail customers could save Ł1,000 by just going for the SE spec and then using their own portable navigation system. But take my advice — the rear-view parking camera is useful because rear and rear-quarter visibility out of the ix35 is not great due to its styling, which only allows small windows to the rear.

The 1.7-litre, four-cylinder turbodiesel engine with 114bhp (but most importantly 192lb ft of torque from just 1,250rpm), aided by the six speed manual gearbox, is a really nice and responsive unit; if just a little gruff under acceleration. It easily copes with slow and medium speed driving on country roads in top gear and there's none of the all too common necessity of having to change down several gears to get the engine to accelerate.

Although the CO2 emissions could be lower than 139g/km, I would rather have responsive performance at the most commonly used driving speeds than dull overdrive ratios.

With a top speed of 108mph, it's not fast, but when does anybody travel at anything like 100mph these days? The zero to 62mph acceleration time of 12.4 seconds is adequate enough.

Officially this unit will return 53.3mpg in the Combined Cycle and for my week of test driving covering the usual motorway, A/B roads and in-town traffic the figure was 48.8mpg, which will be acceptable for most owners.

Overall, the latest Hyundai ix35 is very easy to live with; it looks good so it offers visual status and it drives well enough. In short it's hard to fault for the money. As a country dweller with Winter now upon us, I just wish there was a 4WD version for this 1.7-litre turbodiesel engine; but then that is a personal choice. — David Miles