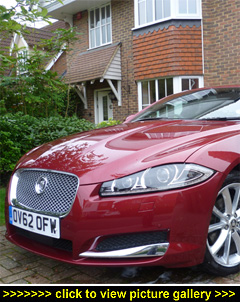 “The trouble with the XF Sportbrake
is that it’s just so damn easy to get
in and drive effortlessly to wherever
it is that you’re going to and then,
sometime later, climb back in and
drive home again — all without a care
in the world...”

SO WHY, EXACTLY, would you choose to take a Sportbrake over its ostensibly more sporting sister, the XF saloon? In a word, an extra dimension: space.

Space for load-lugging. The Sportbrake's boot will swallow a generous 540 litres of luggage (exactly the same as you get in an XF saloon) but pull the one-touch folding mechanism lever in the boot and voilŕ, you have an 'active lifestyle' estate with a flat, two-metre long, 1,675-litre loadbay.

Additionally, floor rails are fitted that allow you to fix luggage nets and load retainers exactly where you want them, and there are rubber (or full waterproof) liners to keep any mud or water well away from the Jag's plush interior and at the same time protect it from scuffs and scrapes.

Human nature says that almost everybody would want to tick the 271bhp box. Actually, most ticks go to the 197bhp Sportbrake, which offers decent performance (0-62mph in 8.8 seconds) combined with pretty good fuel consumption: on paper 54.3mpg for the combined cycle. We did press on a lot during our week's test, which accounts for our 42.4mpg average.

"Can do better", my headmaster regularly scrawled across my school reports. Like me, the Sportbrake can do better; in the Sportbrake's case, drivers with less sense of urgency will, I'm sure, be able to top our figures. Even so, and given that this XF estate — packed to the roof as it is with luxury equipment — is no featherweight, and comes as standard with an automatic transmission, 45-ish is actually not bad at all.

We've been driving the 197bhp version in range-topping Portfolio spec. If you want one just like it on your drive then you'll need to be bankrolled to the tune of Ł44,695. But, really, that's not a lot for a Jag — not when you look at the figures.

In fact, look long and hard at the Sportbrake's figure. You'll like what you see: the curvy, power-bulged, thrusting XF nose; and that elongated roofline, flowing out behind the B-pillars like a superhero's cloak. A very handsome cat indeed.

So, does that make the Sportbrake too 'glam' to serve as a hard-working family troop-carrier? Not one bit. Because accommodating the family is what the Sportbrake does exceedingly well.

As outside, so inside. The Sportbrake's cabin is an affluent place to be. The mix of traditional leather with hi-tech (airvents that power open and a gear-selector that rises Star Trek-like out of the centre console when you press the glowing red Start button) is both well calculated and captivating. You could live with this cabin for years and never be bored.

Settle in behind the thick-rimmed, leather wrapped three-spoke wheel with multifuncion controls for the audio (an excellent Meridian 825W surround sound system with CD and DVD player), phone and cruise. It's also power adjustable for reach and height with entry and exit tilt-away. Our test Sportbrake's wheel came with the optional heated rim — first class. Don't leave home without one this winter!

The dials' neat white-on-black graphics are easy to take in at a glance and the driver's display between them keeps you well informed; scrolling through the information takes but a light press on the end of the left-hand stalk. Most used by us was the digital speed readout — in these days of confusing and sometimes deliberately misleading speed limits, it's essential.

Centre of the fascia is a touchscreen serving the navigation and infotainment. It's crisp to view and self-explanatory to use. All you need to know, really. There are plenty of nice touches; one that we particularly like is the post-wipe extra sweep to mop up any leftover drops. Another much appreciated feature, for hassle-free night-time driving, is the auto-dimming function of the powerfold and heated door mirrors.

There really is no tactile substitute for leather upholstery — the Sportbrake's heated softgrain leather front seats are not only especially nice in that respect, but also come with three-stage cooling that's brilliant for sticky Brit summers as well as for the times you're stuck in slow moving city traffic.

With all the power adjustable comfort aids, you can set your perfect driving position in seconds. Then you can store it in the two-setting memory that also recalls your personal door mirror and steering wheel settings. In addition to a fine driving position, it's also easy to see the top of the bonnet and the front wings, which makes the Sportbrake easy to place at speed as well as easy to reverse.

Back seat passengers are perhaps the biggest winners with the Sportbrake thanks to its extra (over the XF saloon) 48mm of headroom. They also benefit when it comes to a view of the world as it glides past their long windows.

They also sit lower than those in front but the angle of the backrests is good, plus there's lots of room for feet as well as plenty of leg and head room, even for three grown-ups. A nicely padded centre armrest makes it a very clubby sanctuary for two.

The most important thing when you're carrying is that the load behind you stays level. No problem — the XF Sportbrake, while offering a similar character to the XF saloon, gets self-levelling suspension with air springs at the rear (the saloon uses coil springs and dampers).

Helped by a large tailgate (power opening and closing, naturally) loading access is fine, whether you're putting things in or taking them out. Making matters even easier, the luggage roller blind can be run up the inner tailgate frame instead of retracting horizontally if you only need to access the rear of the boot. And, as mentioned earlier, using the rail system, the boot can be compartmentalised to prevent cargo or cases sliding about. When not required it can be dismanteld in seconds and stored under the boot floor.

'Active' owners can extend the Sportbrake's core versatility with a wide choice of sports and leisure accessories, from dedicated roof carriers for cycles, skis, snowboards and watersports equipment to roof boxes tailored for holding either luggage or sports gear. You can even tow trailers up to 1,850kg (braked) — so much smarter, don't you think, to pull a caravan with a Jaguar than the usual pick-up.

If you plan on doing some caravanning you'll be reassured by the Sportbrake's class win in this year's Tow Car Awards, where it earned a special commendation for the effectiveness of its Sway Mitigation system. And while we're talking tow bars, a cycle carrier is available for mounting behind the tailgate.

Whatever your driving style or requirements, the slick-shifting eight-speed ZF autobox's mission in life could be to make sure the four-cylinder turbodiesel is rarely stressed — while the engine is red-lined at 4,200rpm, eighth gear calls for a nonchalant 1,700rpm to deliver 70mph cruising.

The Sportbrake's handling can honestly be described as 'very well mannered'; even with your family on board you can make good use of its pace without triggering requests to 'slow down' from the rear seats.

Pressing the DSC button on the JaguarDrive panel lets you 'up' the Sportbrake driving experience. Technically it optimises the stability control settings for maximum traction in difficult conditions; effectively it enables a more focused and involving driving experience.

Choose the Dynamic setting instead (identified, rather appropriately, by a small chequered flag on the switch) and you'll immediately feel the Sportbrake 'tighten up' as the adaptive dampers prepare for a good workout, keeping the car flatter and more composed especially when cleaving through tight bends or a series of them.

Stay in Dynamic and also select Sport on the gear selector and you'll get as close to a manual as is possible without physically swopping the ZF autobox for a stick-shift manual. Set thus, changes up and down the scale are by the paddle-shifters on the wheel, with every ratio held unflinchingly to the rev limit with no automatic gearchange when you hit the red-line.

At the other end of the scale, with JaguarDrive in its default setting, using the paddles for the occasional burst of rapid acceleration (or engine braking) is fine. Consider it a finger-operated kick-down that doesn't kick back up until you've finished with it. Unless you continue using the paddles, the transmission reverts back to automatic changing. So, something for every mood or road condition.

Despite all the extra weight stacked aft of the estate's front seats, the rear-wheel drive Sportbrake steers much the same as the saloon — and you do get a sense of what's happening under the front tyres. More than you might have expected, and enough to help it feel as reassuringly wieldy as the saloon.

The Sportbrake rides well, even unladen. Potholed roads and poorly repaired tarmacadam are shrugged off almost disdainfully, even riding on the 19-inch alloys shod with 245/40 Dunlop rubber. The fluent suspension is also a key factor in its overall refinement and everyone aboard benefits from its composure. Good news too is the braking; with either a heavy load or the family occupying all five seats, the brakes (ventilated discs front and rear) are strong — stopping hard won't raise your pulse any.

Overall the Sportbrake is a classic Coventry Cat: involving to drive with smoothly delivered performance, all made better by a mile-minimising refinement. No wonder you can take it for granted and just get in and drive. Anywhere. — MotorBar