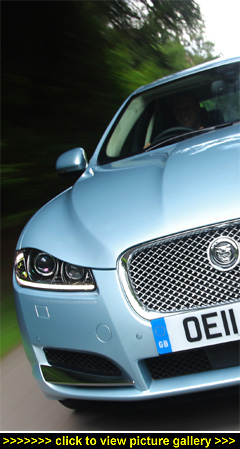 “Launched three years ago, the XF
executive saloon changed Jaguar’s
fortunes. Now, along with a mid-life
refresh, the XF has a new engine —
a 2.2 turbodiesel that promises
50+mpg and lower emissions...”

EXTERNALLY, 2012 MODEL YEAR XFs can be identified by their new nose and tail: flanking a larger, more upright grille are slim new-look headlight units featuring distinctive LED lighting strips; a lower bonnet line, complete with a pronounced and wider power bulge running down the centre and emphasised by a trio of air intakes along the lower bumper section, gives the XF a purposeful head-on stance.

Complementing the revised front-end are new vents on the front wings while at the rear, redesigned tail light units, also with LED technology, extend further into the boot lid.

The cabin has also come in for some subtle reworking with a restyled steering wheel joining revised switchgear for the ventilation system and all-new central and dial-mounted colour screens displaying reprogrammed entertainment and navigation software.

Redesigned seats offer greater support and fresh trim finishes continue to impress. While the XF saloon still suffers from limited rear leg and headroom, it's still a classy and very British executive car. The build quality of the plush interior looks and feels impeccable although there is a noticeable amount of wind noise intrusion.

But the SatNav/Information display is far too complex to use easily. For instance, you need to go into the menus to adjust the radio band or change the heater, heated seats and air conditioning settings.

And while having an integrated control system does cut down on switches and makes the fascia tidier and less complex, it's not so user-friendly.

The latest XF can be had in four levels of trim and specification: SE, Luxury, Premium Luxury and Portfolio.

But the most significant change for the 2012 Jaguar XF range is, of course, the introduction of a 2.2-litre powerplant. This new Jaguar-Land Rover engine has been developed from the existing PSA-Ford-Mitsubishi 2.2 unit and as such is the first of a new generation of four-cylinder petrol and diesel engines to be built in the UK.

The four-cylinder common rail 2.2-litre turbodiesel features low-friction pistons and a water-cooled turbocharger to increase efficiency, plus active engine mounts and modifications to the sump and block to reduce noise and vibration levels. Power outputs are 188bhp and 332lb ft of torque.

Better still, the new engine is mated to a brilliant new eight-speed ZF automatic gearbox and includes a prompt acting Stop-Start system — the first time a Jaguar has been fitted with one of these devices. The result is an official Combined Cycle consumption figure of 52.3mpg, with tailpipe emissions of 149g/km.

As a result, road tax is an attractive Ł130 a year and fleet and business car users will pay 22% in Benefit-in-Kind tax — not as low, admittedly, as the comparable models from Audi, BMW or Mercedes (A6, 5-Series or E-Class) but better than the 26% incurred by the 3.0-litre V6 diesel engines already serving in the XF.

My 40.9mpg test drive fuel consumption is a fair reflection on real-life use, taking in motorway journeys, rural and in-town driving.

Although this is not close to the official figure, I feel it's acceptable for this size of car and the performance: top speed is 140mph with zero to 62mph taking 8.5 seconds.

The secret to the new 2.2-litre's acceleration is the relatively high torque (a very ample 332lb ft from just 2,000rpm) which the eight-speeder auto uses to provide fast, progressive power delivery to the rear wheels.

There's no time lost between gearchanges; they're seamless and fast. The top two ratios are overdrives, used to obtain the best possible fuel economy and lowest emissions. On a motorway cruising at 70mph, the 2.2 XF's rev-counter shows just 1,500rpm. While the engine may appear subdued or even sluggish in the standard Drive mode, the speedo says otherwise.

However, twist the rotary gear selector to its Sport setting and the engine comes alive — it's really very engaging and, dare I say, fun to drive. The throttle response is sharper if the gearshift paddles are used; do so, and the car suddenly wakes up and moves out of 'cruise' mode.

This mode of driving the XF is for those days when your driving needs to be enjoyable as opposed to a cosseted motorway cruise or the endless stop-start on congested roads.

Against: More expensive to run (mpg and CO2-wise) than its main German competitors, limited rear headroom, touchscreen control system is too complex with too many menus.

That noted, the 2.2 XF still has a lot going for it, starting with the elegant and refreshed styling. It also combines sports and executive image with performance, is agile and comfortable, and has an impressive engine and automatic transmission combination.

On the face of it a four-cylinder diesel engine in a Jaguar might seem a bit radical for the brand purists. But a whole new younger generation of Jaguar drivers from the fleet and business user-chooser segments will discover that there's no pain — only gain — from the cleaner and more stylish 2.2-litre diesel XF. — David Miles