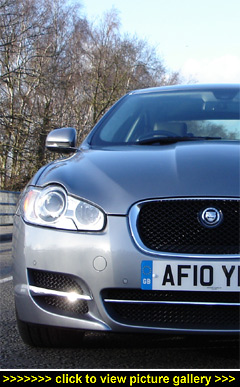 “Don’t be influenced by the 60+
global accolades scooped by it since
its launch. Because if you want to
find out just how good it is, all you
have to do is to drive the sporty
Jaguar XF...”

I GUESS WE'VE RATHER GIVEN THE GAME AWAY by saying that. However, knowing something's first-rate as a headline is one thing; discovering in what way is what makes it interesting. Starting with a prerequisite for any Jaguar — the looks — the XF scores highly.

In actual fact a four-door, five-seat saloon, the XF's styling is flagrantly deceptive — in the nicest possible way. Inside it's undeniably exactly what Jaguar says it is: a practical saloon. Outside, though, it's far more handsome than a saloon has any right to be. First impressions are of a lithe coupe totally in keeping with Jaguar's ethos of producing 'Beautiful, Fast Cars'.

The XF's declared competition are the usual premium brand executive suspects — the Audi A6, BMW's 5 Series and Mercedes' E-Class. None of whom can match the Jag for charisma, which impresses even before you drive off in it.

Because it's the XF's interior, recently upgraded to XFR levels, that edges the other three into the shade. If you were expecting 'trad' Jag then bad luck, you'll be disappointed — the XF's modish cabin is like no other in this class. Sure there's still lashings of quality hide and well-considered chrome and aluminium touches, but where the XF really scores is in the manner in which it's been applied.

Climb behind the wheel and feast your eyes. Actually, until you fire up the engine by thumbing the stop/start button not a lot happens. Do so, and the cast alloy JaguarDrive rotary gear selector rises up out of the centre console like something in a Star Trek spacecraft; at the same time four air vents are quickly revealed in the aluminium fascia as their blanking covers rotate silently out of sight. Showy? Not in the least — just a welcome flash of well-executed contemporary flair.

We tested the Ł46,900 top-spec Portfolio version which comes highly-tricked out with all the top-end kit previously only found in the more expensive XFR models. Most appreciated are the fabulous power-adjustable leather sports seats — not 8, not 10 and not even 12-way, but 14-way for the front passenger and 18-way for the driver. It's no exaggeration to say that getting comfortable — and we mean truly, bone-deeply comfortable — has never been this easy.

Power-adjustable side bolsters (that pump up like the lumbar support) ensure both the driver and passenger remain seated during the exciting bits. Add in an easy entry and exit tilt-away powered steering column with liberal reach and rake adjustment and a heated meaty rim (keeps your fingers dexterous on long drives as well as on cold days) and the perfect driving position has never been more attainable.

The interior is not only a classy place to be but cool, too. Because adding to the pleasure of just sitting in the front of the XF's sporty cabin are ventilated seats that will not only warm you up but also cool you down — that's right, they chill; and seriously so.

A camera-generated 3D display on the touch-screen makes light work of going backwards, while the nearside door mirror dips automatically for a view of the kerb when you select reverse gear. Talking of the touch-screen, you'll find it intuitive to use (we try not to read car handbooks unless we absolutely must, and didn't need to for the XF) with a touch-operated foolproof side-sliding menu system covering navigation, climate, vehicle and audio functions.

Given the coupe roofline, headroom is far more abundant than you might have been expecting. In fact, there's ample room in the cabin for four, who'll feel delightfully cosseted by the comfort and the hushed drive quality. Wide opening doors and no issues with getting in or out, either. You also get an accommodating boot: 500 litres should be as much as you'll need but drop the 60:40 folding rear seats and this nearly doubles, to 963 litres. Cabin oddments space is good and neatly out of sight.

Taking care of the audio is an exclusive sound system — a Bowers & Wilkins 440W system with Dolby ProLogic II surround sound and no fewer than 14 speakers plus a 6-disc in-dash CD player and DAB. The XF's Portable Audio Interface also allows simple, direct connection of iPod and MP3 players with full control via the touch-screen or steering wheel controls.

Pressing that stop/start button opens up a new set of experiences for the XF driver. Or lack of them — it's very quiet in the cabin. The twin sequential turbocharged 3.0-litre diesel engine under the bonnet is not only noticeably low-key, but due to recent improvements it's also noticeably quick. Generating 271bhp and a very persuasive 442lb ft of torque at 2,000rpm, this oh-so-refined V6 diesel unit accelerates the XF from 0-62mph in 6.4 seconds and engine response at low- to mid-range speeds is unfailingly immediate. Top speed is limited to 155mph.

Let's be honest, as good as it is, you're not buying this Jaguar just to sit in the cabin listening to your favourite tracks on the Bowers & Wilkins sound system. You're buying it for its appetite. Not to be confused with its thirst — which is another good reason to buy the V6 diesel. Officially, this very quick Jag will average 42mpg, 30 around the houses and a pretty remarkable 51.3mpg touring.

During our week's test we averaged 32.8mpg but then we did succumb to its power and torque temptations. A lot! Abraham Lincoln said that if you want to test a man's character, give him power. Guess we just proved that! Driven with a dash of restraint, especially cruising on longer journeys, there's no reason why you shouldn't expect to see the official 42mpg on the touch-screen.

And a warning — you really will be fooled into thinking you're driving a powerful petrol-drinking V8 and not a diesel, so Jaguar's new diesel mis-fuelling prevention device is fitted as standard to ensure your not-so-frequent fuel stops won't be a disaster!

Now, about that 'appetite'. It's an appetite for roads; any and all roads. Straight, winding, dipping, sweeping… you name it; the XF will get the better of it. From a driver's point of view it's all good news because whatever tarmac you throw the XF at, its chassis will always have more than enough grip and composure in reserve.

Of course it helps that the XF can now have the same adaptive dampers as the XFR — they come as part of the Ł1,250 Adaptive Dynamics Pack which provide all the benefits of an automatically-managed damping system without you having to flick between settings while you're driving to find the one that works best for the particular section of road you're on.

Like the Ferrari 599's manettino, the XF allows its driver to fine tune the driving characteristics. Immediately behind the rotary JaguarDrive selector are four neat, silver switches, three of which modify the handling: Winter mode; Dynamic and DSC. Winter mode modifies engine response and modifies the gear change strategy for slippery conditions; given our increasingly treacherous winters, it will definitely come in handy.

However, red-blooded drivers will be more interested in the other two. Press the Dynamic Stability Control switch and you can activate TracDSC for reduced system interventions — this is for use only on dry tarmac. Try it on a damp road and you'll see why. So, select this and be ready for some seat-of-the-pants driving. Oh, and watch out for the XF's pert little tail… Alternatively you can simply switch DSC off.

Your other option — Dynamic — optimises the vehicle systems to deliver a 'more involved driving experience'. Combined with seamless paddle-shifting, a Sport setting that offers permanent manual selection and a turbocharged powerplant that never feels out of breath even as it hits the red-line and you have a recipe for some very tasty driver entertainment.

Jaguar's engineers really have done a thorough job of fettling the XF's handling. Underpinning their efforts is a stiff bodyshell and a grippy chassis that feels beautifully composed on all roads. Even when driven combatively in Dynamic mode, pushed onwards by the wave of torque from the twin-turboed V6 diesel, it feels unruffled; completely at ease with its abilities. The communicative steering plays a major part in this class sports saloon act, providing decent feedback. As, too, do the brakes, which serve up retardation with an 'R'.

When you're not in combative mode, the XF glides along in true Jag style. And that's riding on 285x30 SP Sport Maxx rubber wrapped around 20-inch wheels — remarkably, they don't appear to degrade the ride quality even on our 'Third World' British roads. And even when the ride automatically firm's up, the XF's refinement remains excellent. Overall, the balance between soothing progress and roadholding and handling couldn't be better.

News just in is that a resurgent Jaguar has made it into the top 10 'Consumer Superbrands 2011' judged on its quality, reliability and distinction. What's particularly heartening is that now you don't need to be a flag-waver to buy a Jaguar; it's not about what you can do for Jaguar, but what Jaguar can do for you. Drive an XF not because it is British but because it is Better. — MotorBar