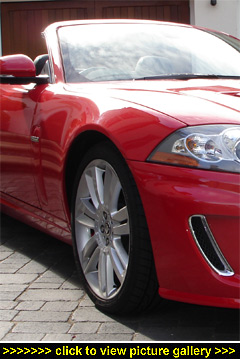 “Someone recently said that the
XKR needed more aggression.
Balderdash! The latest Jaguar XKR
Convertible Supercharged runs
to 155mph and leaps off the line to
punch past 62mph in 4.8 seconds...”

THERE'S A SERIOUS MISCONCEPTION today about performance, based on the very flawed belief that you can never have too much of anything — be it money, power or bhp...

Panache demands balance; between beauty and the beast. And panache the XKR Convertible has in spades, starting with the casual way it carries off those evocative bonnet louvres; a tiger wears its stripes with the same nonchalance. The story's the same for the quad exhaust tailpipes, meaty rear spoiler and side power vents. No bragging or aggression here; just chassis-deep confidence.

Our Jaguar XKR was painted in Salsa Red — a colour that does the convertible bodystyle justice in the extreme. Naturally, the very first thing you do with a car like this is to drop the top; press the appropriate button and 18 seconds later you're good to go.

Buckle up, push the Start button and the 5.0-litre V8 bursts into life with a crisp bellow that will wake up the neighbours quicker than Bryan Adams. As it does so the circular gear selector rises out of the centre console by which time the Jaguar's 5.0-litre heart is idling like the big contented Coventry cat it is. Gimmicky? Not a bit of it; just a subtle reminder that beneath the skin this Jag is very much state-of-the-art.

But just before you sample the sophisticated savagery of the XKR's supercharged 510bhp, cast your eyes around the cockpit. The leather and suede trimmed cabin is a joy to sit in — in spite of the two token rear seats, it's really designed for two; it feels self-indulgently snug, a feeling enhanced by superb seats that offer three heat settings (along with a heated steering wheel rim) to keep you cosy in the winter as well as three degrees of chilled ventilation to ensure you keep your cool during the inevitably hot and sticky British summertime.

The active ventilated Sports seats, upholstered in softgrain leather and each with a three-setting memory (delightfully easy to use), adjust every which way — sixteen, to be precise — and are made even better by power lumbar adjustment and side bolsters that can be pinched in tight or opened out wide and a seat base that stretches electrically to provide excellent under-knee support.

The fascia is smart without being showy and nicely clutter-free; the touchscreen controls multiple functions — audio, phone, climate, SatNav and other vehicle settings — and minimises switchgear overload.

The pair of classy dials — 180mph speedometer and rev-counter redlined at 6,750rpm — are simple, clear, chrome-ringed items separated by an easy to read driver's information display that tells the driver all the vital stuff such as gear and mode and the usual range, mpg, etc. Heating and cooling, by the way, is first rate both with the roof up and down. And then there's that distinct odour of fine leather — still evocative in our test car even after ten thousand miles.

It's not worth itemising the XKR's very comprehensive 'kit list' because just about everything you could mention is already fitted as standard; suffice to say everything from keyless entry and start to 3D touchscreen SatNav awaits your pleasure. 'R' Audiophiles can take pleasure in their sounds (from iPod via the touchscreen, CD or digital radio) broadcast crisply through a 525W Bowers & Wilkins premium sound system.

A thoughtful feature is the separate audio on/off that's independent of the touchscreen which, should you prefer, can also be shut down. You'll also appreciate the front doors not being as long as they look from outside — no problems getting in and out in car parks and if it is a tight one you can always drop the frameless one-shot window to ease matters.

As already mentioned, topless comes in under twenty seconds. Most XKR drivers will want to keep all four frameless windows raised with the mesh windblocker in place for buffet-free faster driving; up to the 50mph mark, al fresco driving with all the glass out of sight and the deck totally clear is involving in a more organic way. Top raised, such is the quality and attention to detail of the headlining and pillar trim that you could be travelling in the all-of-a-piece XKR coupe.

For the full enchilada driving experience, press the XKR's Dynamic button and twist the rotary selector knob to its Sport setting. Flex your right foot and be prepared because it all happens fast. Very fast. One second you're trickling along admiring the view, the next you're experiencing that supercar shiver up your spine as the XKR surges seamlessly and relentlessly forward through a tunnel of blurring scenery.

The XKR isn't just fast in a straight line — no big deal as many of today's quicker cars can pull that trick off. However, where the XKR shows its true colours is on all the other sections that join up the straights. In two words, it's been 'properly sorted'. No driving toy, this Jag, just bona fide driving joy.

Point and squirt — the XKR does exactly that. Nail the throttle in Dynamic mode and the big cat does a sexy little wiggle with its hips as it settles, grips, and then catapults forward with a deep-throated growl. The six-speed auto 'box (there's no manual option; nor do you need one) seems to have that delightful knack of always being in the right gear and not up-shifting too early or at an inopportune moment. In full-on Dynamic+Sport, up-shifts are totally controlled by the driver via the paddle-shifters even when the rev limit is reached. At the other end of the scale there's a Winter mode for slippery conditions.

And for everyday driving it can be left to its own devices in 'D' — but you can still dip in and out of sequential manual control at any time by using the shift paddles on the back of the steering wheel: left (-) takes you down; right (+) up. A nice touch is the automatic throttle blip during downshift requests — good enough to fool bystanders into believing it's a deftly driven manual. So whatever your mood, the XKR has got it covered.

The heart of any GT is the steering. The XKR's grippy, leather-clad, three-spoke multifunction wheel feels sporty and nicely in touch with the chassis which, thanks to the effective but diplomatic electronic safety systems, is pretty hard to upset — unless you select your very own hooligan mode — and it's default state is 'planted' even when carving through bends.

The suspension is forgiving and despite running on 20-inch rims (255/35s at the front and 285/30s at the rear) the XKR rides fluently. Stopping is equally reassuring courtesy of massive vented discs front and rear and bright red 'R' callipers. And it's easier to park than you'd think — thanks to front and rear sensors and on-screen graphics.

A cliché but nonetheless true — people fortunate enough to have Ł85K to spend on a car don't worry too much about fuel consumption: officially the XKR's is 23mpg combined, 14.9 urban and 33mpg extra-urban. During a week's indulgent and immensely satisfying driving we recorded a liveable 20.2mpg. Luggage space is also liveable — the Convertible's boot can manage 313 litres of luggage.

The supercharged XKR has got it all — the looks, the power, the lot! There's just one caveat: with 0-62mph in 4.8 seconds and 503bhp on tap, it's devastatingly quick and you really do need to be disciplined enough to keep an eye on the 180mph speedo. — MotorBar