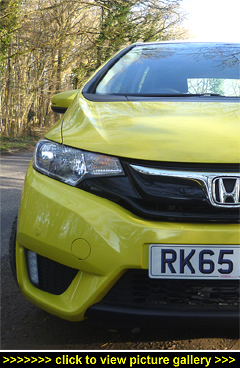 “If you’ve seen the ads on TV then
you’ll know that there’s nothing
inscrutable about the new Jazz’s best
features which, thanks to some
‘magic’ seats, include class-leading
space and versatility...”

NOT ONLY THAT but this latest, sharper-cut Jazz is a much snappier dresser — one who can put even Gok Wan in the shade. Its new wardrobe is drawn from a very vibrant eight-colour palette (some solid, some pearlescent and some metallic) that flamboyantly defines 'Jazz' — just saying their names evokes the exciting colours: Milano Red, Sunset Orange, Attract Yellow, and Brilliant Sporty Blue.

Our test model came dressed in an Attract Yellow outfit — and it sure did! It also wears a much trendier wraparound grille and headlight treatment, similar to that fronting Honda's new HR-V crossover. From a standout chrome-and-black grille, the Jazz's thrusting nose runs backwards over a sculptured bonnet into a steeply raked screen, and tailwards along sharply contoured flanks.

This new edgier-looking, third-generation Jazz is taller and longer (now just 5mm short of four metres) and Honda has managed to inject even more space into the reworked cabin — not only is it best-in-class but it's as spacious inside as many cars from the class above. And even some bigger saloons!

It's ace in the hole is its ingenious 'Magic Seats' system — like all great ideas it's a simple strategy and it works with simple ease. Where most cars block off the space beneath their rear seats, the Jazz opens it up so you can make full use of it. For a start you could slip some squishy bags under there…

Or you can flip up either seat base (like their respective backrests, they're split 60:40) so it sits tight against its seatback; push the base's swinging bar support downwards and it locks the folded seat in place. Do that both sides and in seconds you'll have turned the rear cabin into a large and useful self-contained cargo space between the boot and front seatbacks. Big enough to take a bike, chest of drawers, or a number of heavy-duty cases. And, thanks to the wide-opening doors, even tall, upright items can be accommodated in the rear footwells.

Leave them in their standard position and behind is a good-sized boot with a 354-litre capacity — far bigger than what you'll find in many a supermini. Fold both rear seatbacks — one quick, fluid movement and their bases drop with them into the footwells — and you get a seamless, perfectly flat-floored loadbay that can accommodate 884 litres if you're loading to the window line, or a huge, van-like 1,314 litres if you're loading all the way to the roof.

In addition there are two large, easily accessed lidded storage lockers built into the boot floor: the first can be used for anything; the second one holds the tyre repair kit but there's still a lot of room left over for oddments. And while the Jazz only fields a 1.3-litre engine, it will tow a 1,000kg braked trailer. Also very handy if you ever need to transport something long and bulky — the front passenger seat backrest can be folded totally flat.

Getting aboard is easy through the large doors; and you don't drop into your seat so much as slide on, which is a very pleasant start. The seats, upholstered in a silky fabric that feels good to the touch, are well-shaped and supportive and proved to be comfy over long distances.

Once inside, four adults can be accommodated in comfort (five if needs must). And, amazingly for this class of car, they won't feel at all like sardines thanks to generous space to stretch out with the bonus of a fist of headroom.

The cabin ambiance is smart and set out with a pleasant efficiency; a seven-inch touchscreen sits between the central fascia air vents and large, knurled, foolproof AirCon controls. The main dials seen through the multifunction wheel (phone, voice, media, cruise, speed limiter, driver info menu) consist of a large speedometer with a smaller rev-counter to its left and a driver's information display to the right; clear white figures and graphics keep the driver well informed at all times.

The touchscreen incorporates Honda's Connect app-based system that gives you Internet radio and browsing with access to real-time news and weather, Aha app integration, DAB, a single-slot CD player, 2 x USB and 2 x HDMI jacks as well as fronting the infotainment and Garmin SatNav that serves up sharply defined mapping — a nice, and these days essential, touch is the speed limit warning that's shown on the maps.

Ahead of the gearlever are a pair of cupholders and an open tray with access to a 12v power socket plus the USB and HDMI jacks. The driver also gets an expanding cupholder set in the right-hand fascia, plus there's a good selection of cubbies including a usable glovebox and a fair-sized storage box between the front seats under the armrest — more than enough to tidy away all your bits and bobs.

It's also good to know that you're riding in the safest supermini — having already been awarded a top 5-star NCAP rating, the Jazz has also taken Euro NCAP's prestigious Best in Class Supermini 2015 title for outstanding safety performance.

Setting a decent driving position takes but seconds and once done you'll enjoy excellent all-round visibility. All the controls are light, the gearchange action is quick and precise, and the accurate power steering comes with enough feel for the driver to know where the front wheels are pointing. All of which adds up to a car that's notably easy to jump in and go.

When the Jazz's 'magic' back seats are in their default passenger-carrying position, the rear cabin is a good place to be — with adjustable backrest angles and wide seat bases it's easy to get in the mood for some relaxing; and even if you're one of those souls who find it hard to unwind, there's still a full fist of headroom even if you sit bolt upright. There's more than enough foot-room to share with a third passenger sitting in the middle, and the decent knee-room means there's no restriction on stretching your legs.

Large windows let in plenty of light and views out are good. If you prefer the written word then there's a large magazine pocket on the back of the passenger's seat. Three seatbelts accompany three headrests, all of which sit level with the top of the seatbacks when not in use which is good news for the driver. And if you like to keep hydrated, the bottle-holding door pockets are for you.

Suspension revisions have resulted in a ride quality that on urban blacktop is compliant enough to smooth out the bumps and humps without feeling 'soft' when you want to get a move on. When you do, you'll find that body roll is well controlled through and around corners and that the Jazz feels reassuringly composed. Naturally there's a stability control system to keep things shipshape and while the Jazz is no hot-hatch, its dynamic repertoire is all that a good supermini needs.

Picking the engine is a no-brainer — there's only one available! But you won't feel hard done by because it's one of Honda's feisty i-VTEC petrol units; a 1.3-litre that comes with a clean-changing six-speed manual gearbox (a CVT auto is an extra-cost option).

It's a willing engine that despite having just 100bhp and 90lb ft of torque is well able to power the Jazz around — 0-62mph takes 11.3 seconds and the top speed is a more than capable 118mph. Talking of which, it has a relaxed cruising gait and will happily keep up with the Friday-night flow on the motorway.

If you think you're missing out economy-wise by not being offered a diesel then think again — this petrol-drinker averages 52.2mpg in the real world, which by any standards is frugal enough. Officially its EU fuel economy figure for the combined cycle is 56.5mpg, to which in real-life it comes honestly close — something that also suggests the extra-urban figure of 65.7mpg could be achievable by light-footed drivers on long touring trips.

Competing in a supermini market well-stocked with rivals such as the Corsa, Peugeot 208, VW Polo, Skoda Fabia and Toyota Yaris, the Jazz stands out for its space and versatility, all cleverly packaged in a well-equipped, smart-looking bodyshell. But, like the saying about beauty being within, the Jazz's true charm has to be that it is so easy to live with. ~ MotorBar