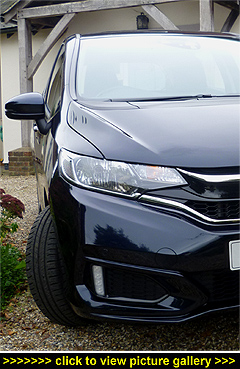 “If you’re a fan of ‘inner space’ then
Honda’s Jazz could be your new
best friend. And while its ‘Magic Seat’
system doesn’t involve real magic,
it’s nonetheless a very smart party
trick indeed...”

CAVERNOUS ON THE INSIDE it undeniably is but outside — at four metres long it's two inches shorter than a Fiesta — the Jazz looks too compact to be so Tardis-like. Yet compared to supermini and hatchback alternatives from the likes of Ford, Vauxhall and VW, the Jazz trumps them all for both space and versatility.

Looks-wise it sports a thrusting nose with a sleek chrome and high-gloss black grille flanked by headlight units that cut sharply into the bonnet and front wings. The tail is strongly sculptured; the rear wraparound light clusters are inset into the rear wings creating 'arrowheads' pointing forward back down the flanks. The wedge-shaped side profile is streamlined, emphasised by a rising waistline that does a grand job of masking the Jazz's high-line glasshouse.

From a user's point of view the Jazz's fresh-looking and decidedly driver-friendly dash and instrument panel are spot-on — everything essential is clustered where it's easily seen by the driver with none of the 'sprawl' that afflicts some other brands. Centred in the dash, underscored by large knurled knobs for the AirCon (effective hot 'n' cosy or cool 'n' chilly) that are a cinch to use on the move, sits a seven-inch infotainment touchscreen. In SE Navi trim this is also the command and control centre for the Garmin SatNav.

As you'd guess there's also a CD player, DAB radio, Internet radio, real-time traffic updates, Aha app, Bluetooth handsfree, Internet browsing, and Aux, USB and HDMI ports. Navigation or infotainment, the menus are logical and intuitive — most users probably won't even need to read the handbook. The 3D mapping is crystal clear so you always know not just the names of the roads but exactly where you're headed; auto-zoom is quick and there's also smartphone-style finger-pinching and drag-to-jump operation.

The instrument panel holds three dials: two smaller ones either side of a dominant central speedometer; to the right is a rev-counter and on the left a circular TFT driver's display offering a comprehensive range of driving data (including the posted speed limit) which you can safely scroll through while driving using the buttons on the multifunction and rather sporty-looking wheel.

The cabin ambiance is inviting with smart fabric upholstery, soft-touch materials, well-placed silver accents and plenty of storage areas that include a long, deep bin beneath the centre armrest, good-sized glovebox, bottle-holding door bins, dual-use siamesed cupholders, and a third cupholder built into the fascia to the right of the wheel rim that expands to provide a convenient holster for all manner of things from sunglasses and mobile phones to cameras, keys, and 'grande'-sized caffeine takeouts.

Doors that open to almost ninety degrees make getting in and out a doddle. Once inside the latest third-generation Jazz doles out plenty of room to all, especially the driver and whoever's riding shotgun — your front passenger will be sure to appreciate the fist-and-a-half of headroom and the fact that they can truly stretch out their legs. They'll also like the centre armrest as well as the one on their door, and the height-adjustable seatbelt. Worth mentioning are the deep sun visors that are indispensable when you're driving into that low winter sun.

The seats themselves are well-shaped and comfortably supportive. And for the driver the plentiful wheel and seat adjustability mean setting that perfect driving position is both quick and simple. Welcome news for lower leg comfort on extended trips is the fact that you sit well off the floor.

Given all the extra hazards that drivers face in traffic such as smartphone-fixated jaywalkers and confusing bus lanes seemingly designed to mislead (the better to generate fines!), forward and side visibility is paramount — thanks to a tall and wide windscreen framed by slim pillars Jazz drivers can relax as they take in the wide-angle views.

Deep front side windows also contribute to safety, making crossing busy roundabouts as risk-free as possible. Checking on what's sneaking up behind you is also refreshingly straightforward thanks to the deep rear screen and side glazing, non-intrusive rear three-quarter pillars, and headrests that sit level with the top edges of the rear seatbacks when not in use.

The SE Navi trim level occupies the middle ground of the spec range but even so it brings a decent amount of kit and safety equipment starting with all the comms stuff including the Connect touchscreen infotainment and navigation system mentioned earlier, cruise control and speed limiter, front and rear parking sensors, the Magic Seat system, on-demand powerfolding heated door mirrors, auto lights and wipes, four powered windows (the driver gets one-shot up/down op), AirCon, and a set of alloy wheels.

Forget, for a moment, the Jazz's ace up its sleeve — its Magic Seats — and the rear cabin is still a light and airy place to be. Split 60:40, the rear seatback angles can be adjusted and there's loads of legroom — more than enough for a strapping six-footer to comfortably sit behind a similarly-sized driver or front passenger and still have masses of knee room. Oh yes, and with space above their head!

And then there's those clever Magic Seat bases that enable humongous versatility for load-carrying. If you need to carry extra-tall items just lift the seat bases and lock them vertically against their backrests — wide-opening rear doors and a minimal central floor tunnel let you load and unload cumbersome cabin-width items easily.

Alternatively, the bases fold right down into the footwells to better merge the backrests with the boot and open up a large loadbay. With the seats occupied there's plenty of space under the rear seat bases for squashy bags and weekender cases. And when you're back in peeps mode, three side-by-side is doable whenever called for.

Convenience features include the reclining backrests, a large pouch on the front passenger's seatback, armrests on each door, and door bins that will hold bottles. Driver's carrying youngsters will be glad of Isofix points on both outer back seats and, equally reassuring, the 'buckled-up' warning display for all five seatbelts.

While a six-speed stick shift is available, Honda's 7-speed CVT autobox will suit anyone who regularly drives in city traffic or in the rush hour. Actually, it's hard to make a case these days for having any sort of manual transmission unless trackdays feature in your lifestyle. Needless to say, the Jazz's CVT auto is fine — it's a smooth-changer and comes with paddleshifters on the wheel and a Sport mode for when you want a sharper bite or more focused thrust for overtaking.

It's partnered with a revvy 1.3-litre four-pot petrol engine that produces 100bhp and 91lb ft and between them the Jazz's transmission team make light work of driving on all roads, be they inner-city, winding 'B's or long-haul motorways. Top speed is a perfectly acceptable 113mph with the benchmark 0-62mph time taking 12.2 seconds — keeping up with traffic is not a problem. Neither is helping to keep the planet's air clean thanks to emissions of a low 106g/km. And even with the two-pedal set-up you won't be gobbling up the world's petrol reserves: officially the CVT's combined cycle economy is stated as 48.7mpg. Sounds very reasonable but even driving pretty hard over a full week's testing we did even better, logging an impressive 49.7mpg!

For a car likely to spend much of its time in urban surroundings, the Jazz deals with poor blacktop fairly unflappably; let off the leash on B-roads, as well as motorways, it rides quietly and pleasantly. At the same time the suspension is firm enough to keep the ride level, which also helps in the handling department.

Grip copes easily with the 91lb ft of torque being put down through the front wheels, and the steering is accurate — and light enough for stress-free city driving and parking while also being quick enough to whisk the Jazz round corners and through the twisties when you're in the mood for a punt. The brakes are equally reassuring whether you're in a 30mph zone or bowling along at the UK's top legal limit; plus there's effective 'engine braking' when using the paddles to drop down the ratios.

At 354 litres the Jazz's boot is more than you'll find in its class rivals; in fact, even some small family cars aren't as accommodating. With the rear seats in use there's room for usually awkward items such as large pushchairs, and even the family pooch (or two) will feel very cosseted on trips to and from the park.

And access is easy too, helped by the wide fifth-door aperture. The boot's of a regular shape that ensures every inch counts but for when that's not quite enough just drop the 60:40-split rear seats: as mentioned earlier, the seat bases dive into the footwells as the backrest folds down on top of them which gives you extra carrying height and a perfectly level and seamless loadbay floor — and a maximum 1,314 litres for cargo.

The tailgate opens high, the boot floor is closer to the ground than many, and there is a shallow lip to load over but it's not a problem. A parcel-shelf luggage cover ensures quick access with none of that extra pulling that often comes with fiddly rollerblinds. Additionally there's meaningful out-of-sight storage beneath the boot floor. Finally, very long loads can be fitted in courtesy of a front passenger seatback that folds flat so that they can be pushed all the way forward as far as the fascia.

It's no exaggeration to say that there's nothing else quite like the Jazz — and along with a brilliantly versatile and spacious cabin it has plenty to offer. Despite its 'big on the inside' architecture, its outer 'supermini' dimensions make it exceedingly fit for purpose in and around town, plus out on the open road it's a satisfyingly easy driver. ~ MotorBar