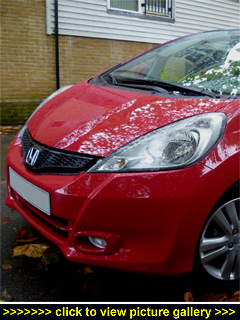 “With a string of nine consecutive
JD Power Customer Satisfaction
awards under its belt, it’s not
surprising that Honda’s Jazz is a big
hit with supermini buyers...”

SUPERMINI IT MIGHT be on paper but in the metal you'll be surprised at just how spacious and versatile it is on the inside.

Once a Jazz owner always a Jazz owner? Actually, for the majority of Jazz drivers that's true — the five-door, genuine five-seater supermini positively encourage strong customer loyalty; and not just because the Jazz is Built in Britain (at Honda's Swindon plant). And given that the latest models offer better economy, ride better, steer sharper, and cosset you in a smarter cabin, it's not hard to see why.

The 1.4 i-VTEC engine makes a good city and out-of-town choice. With 97bhp and 93lb ft of torque on tap it's a responsive unit, happy to accelerate sharply from low speeds; travelling on motorways it cruises with a relaxing gait and a quiet cabin ambiance at the legal limit.

Getting the most from the Jazz is made easier by a smooth-changing five-speed manual gearbox stirred by a leather-wrapped gearknob that fits your palm perfectly. Like many of today's cars, you're prompted for both up and down shifts but you never feel 'nagged' as some similar 'big brother' systems make you feel. So, change in your own time and you and your Jazz will mosey along just fine.

Central to its appeal is the Jazz's real-world economy — officially given as 50.4mpg, a hard week's driving with MotorBar saw an overall average of 54.7mpg recorded. No complaints there! The benchmark 0-62mph, incidentally, is done and dusted in a brisk 11.8 seconds. Top speed is a perfectly ample 113mph.

Coming from a Honda factory you can rest assured that the Jazz is extremely well put together. In fact it feels far more 'solid' than the average supermini. Ride comfort is discernibly better than on previous versions and the helm is now weightier; the extra feedback lets you exploit its nimbleness — a big plus in heavy town traffic as well as when bagging that elusive parking space!

Our smartly-finished Milano Red test EXL model was very close to the top of the trim tree and, as you'd expect, comes well specced with a full complement of airbags and a full set of active driver aids such as traction and stability control.

Open either front door and you'll be welcomed by large, well-padded seats upholstered in smooth leather. The glasshouse incorporates a lot of glass that alongside the panoramic glass roof creates an amazingly bright and airy cabin — you'll definitely want shades in the summer. Or you can just press the powered sunblind's one-shot button to regulate the amount of light streaming in.

Between the crown of your head and the see-through roof there's a fist of headroom — much more than you'd expect judging from the Jazz's external profile. Those in the front also enjoy plenty of room in all other directions — it's a wide cabin and you notice almost immediately that both front passengers have room for their respective elbows and shoulders without any crowding.

The one doing the driving also gets a captain's armrest for their gear-changing arm; commendably it doesn't cramp the traditional pull-up handbrake. The good-to-grip, leather-rimmed three-spoke wheel is multifunctional with remote controls for cruise, driver info, phone, and audio.

A spot-on driving position is easily set, with fine-tuning from the adjustable steering wheel and height-adjustable seat; seatbelts also adjust for height for that extra touch of comfort. Knee, shin and legroom are also good, and the two-stage heated front seats are made even better by effective but not intrusive side bolstering and supportive seatbacks. All in all a good place to be…

The cabin has been well thought-out with large easy-to-use on the move controls and switchgear — the two-zone climate control is easily set and adjusted even for glove-wearing pilots. Talking of the colder months, the Jazz also comes with a powerful and quick-clearing heated screen.

The instrument cluster is easily taken in at a glance; the trip information screen is inset in the central speedo and flanked by a smaller rev-counter to the left and a fuel gauge on the right. Simple, clear and effective; exactly as it should be.

Personal clutter won't be a problem for Jazz owners either as there are numerous trays, cubbies and bottle-holding door bins as well as not just one, but two, gloveboxes; the upper one is cooled and the lower 'box of a practical size. For those whose day is not complete without a daily caffeine hit there are built-in cupholders at each end of the fascia that double as handy pockets for oddments.

Visibility for both passengers and the driver is good, even through the back screen (the three rear headrests all rest flush on top of the seatback when not in use). The Jazz — 3.9 metres nose to tail — is an easy car to place on the road and its short front and rear overhangs and tight turning circle make it a no-stress parker.

Freed from the restrictions of the concrete jungle the Jazz delivers an enjoyable ride with confident and predictable handling; it's nimble and a low centre of gravity guarantees stability — not just for cornering but also in wet and windy conditions. Several long journeys had to be made in very challenging weather with torrential rain and gusting winds and the Jazz never once put a wheel wrong. In such conditions you need all the visibility you can get and the standard-fit rear wash/wipe was much appreciated.

Tall and not too long back doors offer easy entry and exit and the rear cabin of the Jazz is an equally pleasant place to travel; making it so is a two-position backrest set at a relaxing back-friendly angle, and plentiful foot room as well as space ahead of your knees so you really can sit at ease with air above your head.

Again, as in the front, door bins can hold bottles and you'll find a large mag pocket on the back of both front seatbacks, plus usable outer armrests. If the outer passengers are prepared to let in a third adult then he or she will also be comfortable — even, thanks to the low centre tunnel, their feet.

The Jazz's so-called 'Magic' seat system is not some fancy name dreamed up by a marketing department but a versatile and brilliantly simple feature that really does work 'magically'.

From either back door you can lift up a rear seat base, fold it upwards and lock it against its backrest to create a large load space behind the front seats. When in its passenger carrying position the rear seat also offers loads of storage under the seat base.

'Pop' the high-opening tailgate and you have easy access over a low load sill to the regular-shaped boot's 379 litres (that's about big enough to swallow a small family's cases). You also have access to an extremely versatile two-tier boot floor that offers multiple configurations — arranged in seconds with no broken fingernails. Alternately, just fold the seatbacks flat for a traditional loadbay of a very impressive 883 litres. Try it and you'll agree — it's magic!

A fine supermini, the Jazz epitomises all that's good about Honda. Even after just a week with the car it was easy to understand the customer loyalty it generates. Would we spend our own money on one? Definitely! — MotorBar