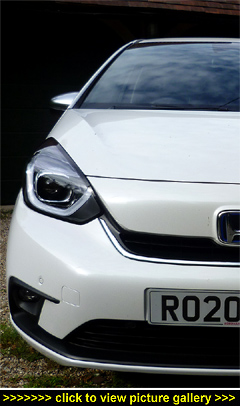 “Honda’s Jazz supermini has, over
its three previous generations,
notched up in excess of seven
and a half million sales world-wide;
half a million of those have been in
the UK. Now the all-new fourth-gen
has arrived — restyled, revitalised
and with hybrid power...”

BUILT BY HONDA. That alone says a great deal about every model wearing the Japanese carmaker's stylised 'H', including this technically-polished new Jazz. And that's because Honda is run by dedicated engineers, so what you get when you buy into the brand is the automotive equivalent of 'a better mousetrap'.

This new-look Jazz is a smidgen bigger than its predecessor but still fits comfortably into the supermini class. One particularly striking feature is the 'wide view' front screen. This owes much to the über-slim A-pillars and offers the driver a brilliantly unobstructed view of the road ahead — a real boon in the cities and urban landscapes where many Jazz models will spend much of their time.

The Jazz's space-maximising four-metre bodyshell is fronted by an appealing nose defined by large light units stylishly cut into the front wing-tops and short, sharply angled bonnet. A rising waistline runs back to a fluent tail treatment that lends the Jazz an almost sports estate rear-end and visually slims down the generous glasshouse. So, refreshingly contemporary with a slick twist — and modish enough to appeal to a wide range of buyers, from young family 'units' to kids-flown empty-nesters.

A big enticement for both repeat and first-time Jazz buyers will be the hybrid powertrain — and no plugging-in required because it's totally self-charging. Two electric motors are hooked up to an efficient 1.5-litre petrol engine to generate a combined 107bhp backed by 187lb ft of torque — so, plenty of usable power whether you're pootling around the houses or cruising from coast to coast.

The performance figures confirm it's surprisingly brisk too: off the line to 62mph takes a crisp 9.5 seconds while the top speed is 108mph. Both better that you may be expecting from 'just' 107bhp plus there's the added bonus of green-ish tailpipe emissions at a low 104g/km.

Three driving modes ensure the hybrid is as efficient as can be wherever you're driving. First is Electric Drive (EV) for pull-aways and low speed motoring: press the Start button and apply some welly… the Jazz will initially move off using battery power alone, so getting off the line is always swishly done. Next up is Hybrid Drive which sees the petrol engine and electric motor working in concert to deliver optimum power when you're accelerating or overtaking.

The third mode is Engine Drive. This kicks in during sustained high-speed cruising when a clutch locks up the engine to the front wheels (generally it's the principal electric motor that powers them) to increase cruising efficiency. If you think all this sounds complicated don't worry because you, personally, don't need to lift a finger — the i-MMD (Intelligent Multi Mode Hybrid Drive system) does it all for you, always engaging the most suitable mode for the circumstances.

And this new Jazz's economy is certainly persuasive: officially it's an impressive 61.4mpg in the combined cycle but over a week's hard driving we beat that to record a smile-inducing 64.7mpg in a real-life mix of road and traffic conditions. And all without pressing the Eco button — use it and you may beat us!

Measuring just a smidgen over four metres nose-to-tail, the urban-friendly Jazz still manages a space-creating 2.5-metre wheelbase. Getting in (and out again) is quick and slick, courtesy of the body's height, generous door apertures and wide-opening doors. Once aboard you sit commandingly tall while still enjoying a fist-and-a-half of headroom. The seats are shapely with light but effective bolstering and smartly upholstered in a fabric and leather combo. Support for your back and shoulders is good and each front seat occupant enjoys plenty of personal space, height-adjustable belts, and three-stage heating.

The spot-on driving position, helped by über-slim windscreen pillars that really do give a widescreen view of the road ahead, offers excellent visibility to all points of the compass. The multifunction steering wheel's controls (including for the heated rim, cruise, and voice commands) are all clearly labelled and a cinch to use on the go, plus the left-foot rest is set at just the right angle for long distance comfort — exactly what you want in a two-pedal car.

In-cabin storage space is in equally good supply with not just one but two gloveboxes, large dual-use cupholders at each end of the dash (they also come in handy for all sorts of oddments) plus there's a third cupholder in the central console, an armrest-capped bin between the front seats, a good-sized tray ahead of the selector lever served by twin USB ports (one fast charging), and practical bottle-holding door bins.

This is provided by Honda's Connect infotainment and navigation system which features Garmin SatNav and a 9-inch touchscreen that 'floats' in the centre of the fascia. With crisp graphics and attractive colours, the SatNav is foolproof and delivers crystal-clear spoken directions in good time and takes full postcode destination entry (the on-screen keyboard is particularly nice to use).

Apple CarPlay and Android Auto provide hassle-free smartphone mirroring plus there are some useful built-in apps. Naturally DAB, Bluetooth hands-free, and an eCall SOS button are all part of the package. Ahead of the driver the digital instrument panel is also well presented, with easily taken-in info. Appreciated touches include the posted speed limit displayed alongside the large digital road speed; we also like the way it flashes subtly if you exceed the limit without making you feel like a criminal.

Safety tech is comprehensive with Forward Collision Warning and Collision Mitigation Braking (slows the Jazz if it suspects a potential collision while also recognising cyclists and pedestrians), ten airbags, including one for the driver's knees and another between the driver and passenger that inflates to keep them safely apart in a major side crash — brilliant!

You relax in the Jazz's rear cabin in supportive and well-cushioned seats. While three adults across the back is doable, most owners will likely be travelling ŕ deux or carrying youngsters behind them. Grown-ups seated in the back will benefit from loads of foot- and knee-room and legroom that's especially generous for a city car; they'll also enjoy a fist of headroom and backrests set at chillaxing angles. With doors that open to ninety degrees, entry and exit is easy.

More good news is the expansive visibility out courtesy of the tapering front seatbacks which allow clear views forward, and long and deep side windows (lovers of fresh air will appreciate that the glass drops fully into the door). Other niceties include the nifty 'patch pockets' at the top edges of the front seatbacks (perfect for phones); lower down there are larger 'normal' soft pouches. A pair of fast charge USBs and bottle-holding door pockets are also provided.

The iconic 'magic' seats really are a great idea — and magically easy to use: flip up either seat base (or both) as you would a cinema seat, then lock it vertically in one single move. Simples! You now can use the rear passenger compartment to carry tall items as wide as the cabin. Getting them in or out is a doddle too thanks to a minimal central floor tunnel, low side sills and those 90-degree-opening doors. Even when the seats are occupied the space beneath them is accessible and makes the ideal place to stow squashy luggage or kids' backpacks.

This all-new Jazz has been upgraded in every department; and it rides far more fluently than its predecessor. And while you might think 'city car' when you look at it, once you get behind the wheel you'll be pleasantly surprised because the Jazz is not only zippy to drive, but puntable too. The suspension is well fettled while the direct-feeling steering keeps it in the game. The hybrid's battery pack lives under the floor and helps keep the Jazz 'planted' as well as reassuringly stable when cruising quietly and smoothly at the legal limit.

Especially useful is the 'engine braking' that's on call at any time — simply move the selector lever back from Drive to the 'B' position; the effect is the same as dropping down a gear or two in a car with a manual gearbox. In the Jazz it's not too severe (which is good) but still strong enough to slow the car down descending a steep hill while simultaneously boosting the battery pack. It's also very useful when zipping along country roads where it gives you more dynamic control through the twisties.

The brakes, often the Achilles' heel of hybrid cars (due to having to provide conventional stopping while at the same time capturing regenerative energy to feed the battery pack) are exactly right on the Jazz. Honda's engineers have done a fine job with them and you can anchor-up progressively and without drama at all speeds.

The Jazz's tallish bodyshape benefits not only people but also their luggage — with the rear seats in use it will swallow a practical 304 litres; fold both seatbacks down and this opens up a 1,205-litre loadbay made better by a seamless cargo bay floor. A clever detail is that when the backrests are dropped forward and down the seat bases also sink fully into the floor to maximise the height available for cargo. Whatever you're carrying, from flatpack furniture to the family pooch, there's room and to spare. Talking of which, yet another neat touch is the 'fitted' protective rubber boot liner; it pulls out easily for a quick hose-down after your four-legged friend returns from the woods!

Getting stuff loaded is easy and is made even more so by a low boot sill and high-rising tailgate; the load cover is a straightforward lift-up parcel shelf. Unexpectedly there's also a large under-boot storage compartment accessed via a lift-up floor section. Taken along with the 'magic' up-folding rear seats there's an amazing amount of cargo room for such a compact car — without doubt the Jazz's interior is the most versatile of any supermini.

There's a lot you can call this all-new Jazz: classy, economical, useful, safe... but perhaps the most important thing is that your hard-earned money buys you a clever and extremely versatile supermini with a full hybrid drivetrain. Canny motorists who appreciate a bit of alright when they see it will love the genuine 64+mpg; their passengers will love the space. ~ MotorBar