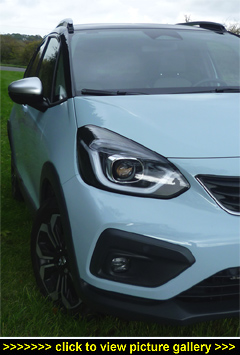 “Cool cats have always been drawn
to Jazz. So, are you enough of a
hepcat to drive one of Honda’s latest
Crosstar models?”

The word 'jazz' dates back to 1860's slang meaning, among other things, vitality, energy, spirit, and possessing panache. So, a zingy name for a supermini. Honda's Jazz has been around in various forms since the Millennium and is now in its fourth generation but in that time has built up a strong fanbase who love it for its impressively versatile space and practicality but equally for its total ease of driving. In tune with the times, it now comes powered by a cleverly-engineered hybrid.

Before diving into its hybrid system we should mention that there's a choice of two Jazz body styles — alongside the SUV-esque Jazz Crosstar reviewed here, and which is oriented toward those enjoying an active lifestyle, there's also the standard Jazz Hatchback. Both now only come with Honda's hybrid powertrain which consists of a 1.5-litre petrol engine partnered with two electric motors.

The Crosstar gains a ride height raised by 30mm, 144mm of ground clearance (a hike up on the standard Jazz's 105mm), black cladding around the wheel arches and lower sill mouldings, water-resistant upholstery, and roof rails for the easy addition of lifestyle accessories. It's also only available in top EX trim and includes Crosstar-specific 16-inch alloy wheels and striking two-tone paintwork.

The headline feature of the hybrid powertrain is that it's totally self-charging — No Plugging-in Required! It also runs in any of three interchangeable driving modes. Of the three the first is Electric Drive, for pull-aways and low speed motoring — the Crosstar starts off using pure battery energy (it powers the motor which drives the front wheels) so every trip sees you whisked quietly on your way. Next there's Hybrid Drive: in this mode the petrol engine and electric motor work in concert to deliver optimum power, especially when accelerating or overtaking.

Third up is Engine Drive. To increase efficiency this activates during sustained high-speed cruising when a clutch locks up the engine to the front wheels. Should you need some extra oomph then the electric motor will join in with a 'boost'. All very clever stuff and you don't even need to lift a finger — the Jazz's Intelligent Multi Mode Drive system manages it all for you, always engaging the best mode for the circumstances.

For much of the time the petrol engine powers the combined electric motor/generator that, in addition to providing the electricity to drive the Jazz also charges the battery pack. Good too that the Jazz's ECO mode can be used without a performance penalty. EV Drive is also engaged whenever the car is decelerating, harvesting more energy through regenerative braking to top up the battery. All-in-all not just smart but seamless in operation. The result is punchy in-town acceleration and smooth stop-start motoring in traffic. On the open road the hybrid powertrain rows you along seamlessly while eking out the fuel — besting the official Combined Cycle figure of 58.6mpg, our hard driven week's test average came out at 60.9mpg.

One of the great benefits of driving a supermini on today's cluttered roads is the compact footprint. The Crosstar scores well in this respect: its four-metre length is fronted by a short bonnet and very slim, twin A-pillars with quarterlights at the front doors' leading edges. Combined with the sweptback widescreen this makes for brilliant forward vision from behind the wheel so placing and parking is a real breeze.

Looks-wise these attributes, combined with a long flowing roofline and raising waistline, camouflage its generous glasshouse while the well-considered crossover styling cues further underscore the Crosstar's planted stance. For the record the Crosstar ships in slightly larger than the standard hatchback version: by 46mm in length, 31mm side-to-side, and 30mm taller. The finishing touch is the two-tone paintwork worn by Crosstar models — our test model looked especially fit in it's metallic Surf Blue and Crystal Black livery.

Getting in and out is quick 'n' slick, courtesy of the Crosstar's increased ride-height, wide-opening doors and higher-mounted seats. If you have small children you'll also find putting them into their child seats to be far easier than in most other cars. And the waterproof upholstery comes into its own not just when carrying your four-legged best friend but also protecting against sticky-fingered youngsters!

Enjoying a fist-and-a-half of headroom, you sit commandingly tall in the shapely front seats. Smartly upholstered in a two-tone waterproofed fabric, they add a dash of pizzazz to the classy cabin; the backrests are nicely supportive and there's plenty of personal space around each front seat, plus you get three-stage seat heating as standard.

The upscale minimalist feel is further enhanced by high quality trim and finishings including the tactile material cladding the dash. A free-standing nine-inch central touchscreen proves to be the prefect size in an age of display overkill and fronts Honda's Connect infotainment and navigation system.

There's also a first-rate TFT instrument cluster seen through the two-spoke steering wheel that along with a large digital roadspeed figure (the posted speed limit is shown where you'd expect it on the main screen's active mapping) and the usual range info, all in perfectly legible white on blue, also shows helpful navigation prompts. For many drivers the set of conventional climate controls and non-slip knurled rotary knobs mounted just beneath the infotainment display will be a welcome change from screen-tapping systems. A multifunction wheel offers more remote controls to minimise distractions and keep you safely 'hands-on' while driving.

Being a hybrid there are graphics and feedback covering charging and battery levels but all blend in with the more traditional driver information data such as a large digitised roadspeed readout and relevant traffic sign information. Display graphics are crisp and clear and the SatNav's spoken directions foolproof and delivered in good time. Full postcode destination entry is appreciated as too is the nice to use on-screen keyboard. All well-considered touches that make the Jazz so easy to live with.

Smartphone integration is handled adeptly by Apple CarPlay and Android Auto connectivity. You'll also find decent real-life in-cabin storage along with the mandatory cupholders — in the Crosstar's case these are built into both ends of the dash and are immensely practical and especially handy.

You'll find Honda has doubled down on gloveboxes for the Jazz — there are two. Plus there's an armrest-capped deep bin between the front seats along with a third cupholder, a tray ahead of the selector lever served by twin USB ports (one fast charging), and bottle-holding door pockets.

The Crosstar version is very well equipped, particularly when it comes to safety. All versions come with no less than 10 airbags (including one that deploys between the driver and front passenger in the event of a side impact to keep them apart as well as one for the driver's knee), whiplash-minimising headrests, forward collision warning and collision mitigation braking (now also cyclist and pedestrian aware), blind spot and cross traffic monitors, intelligent speed limiter, lane departure warning and lane keep assist (as well as white line road markings it very usefully recognises grass verges), road departure mitigation, vehicle stability assist, traffic sign recognition, auto lights and wipes, LED daytime running lights, auto dip/main beam switching, tyre pressure deflation warning, and an SOS facility.

The rear cab is a restful place to relax thanks to supportive and well-cushioned seats. While three adults across the back is doable, most owners will likely be travelling light or carrying youngsters or even some four-legged friends. Adults using the rear seats enjoy a fist of headroom, backrests set at comfortable angles, plenty of foot- and knee-room and, for a city car, legroom that's particularly generous. As with the front doors, the rears open to ninety degrees, making exiting as hassle-free as getting aboard.

Expansive views out, both ahead between the front seats and to the sides through long, deep side windows, add to the pleasure of being a Crosstar back seat passenger. Other nice touches include the neat 'patch pockets' at the upper edges of the front seatbacks that are perfect for smartphones and large seatback pouches. The bottle-holding door bins and pair of fast charge USBs slots will be equally appreciated.

When it comes to secrets you can forget Victoria's — the Jazz has a better one: its rear seats. These so-called 'magic' seats are part of the reason Jazz models deliver best-in-class versatility. Split base and seatback 50:50, they can be folded in two ways: the seat bases can be flipped up cinema seat-style and locked upright against their backrests; or the backrests folded down completely into the footwells. Either way you can use the rear passenger compartment to transport quite tall, cabin-width items. And even when the seats are occupied the space beneath them is fully usable and forms a perfect cubbyhole for squashy luggage or kids' backpacks.

Having recently driven the Jazz Hatchback it was informative to drive its higher-riding Crosstar sister, which in spite of being heavier and a tad larger serves up a ride that feels softer sprung and consequently more compliant. The 'comfort' profile sidewalls of its 185/60 tyres no doubt help some and overall those consigned to the back seats are in for some easy ridin'.

The stopwatch figures confirm the Jazz's nippiness: 62mph from standstill flashes up in a crisp 9.9 seconds; flat out is beyond the 'ton', at 107mph. Certainly better than you might be expecting from a total system output of 107bhp. Nevertheless the instant availability of peak torque (a very likeable characteristic of electric motors) means its 186lb ft can effortlessly be deployed to maximum effect. And it is — the Jazz simply zips along and is equally happy dodging around town as it is cruising motorways.

Also useful is the 'engine braking' that's on call at any time: flick the selector lever back from Drive to the 'B' position and the effect whenever you then lift off is the same as dropping down a gear or two in a conventional car with a manual 'box; it's strong enough to slow the car down a steep hill (and at the same time it gives the battery pack a boost). It's also great when you're flying along country roads where it gives you more dynamic control when easing back on the accelerator through the twisties.

While the average Jazz buyer isn't expecting (or even wants) a car you'd spear through slaloms for the sheer hell of it, it drives confidently when you want to get a move on. The steering is typically Honda-precise and the Crosstar feels assured in spite of its raised ride height with predictable cornering behaviour. And the brakes (all-round discs) — often 'snatchy' in hybrid cars with regenerative braking — are strong with a nicely progressive pedal feel even at low speeds. Press on? Yes, you can. In fact, this Crosstar is unexpectedly chuckable.

The tallish bodyshape is not just good for people but also their luggage — with the rear seats in use it will swallow a practical 298 litres; fold both seatbacks down and this opens up a cavernous-like 1,199-litre loadbay that benefits from a seamless floor. A clever twist is that when the backrests are dropped forward and down the seat bases also sink fully into the footwells to maximise the height available for cargo. Yet another thoughtful touch is the 'fitted' protective rubber boot liner so after your four-legged friend returns from a trip to the woods or a muddy adventurous weekend away it can quickly be pulled out and hosed down.

The Crosstar scores highly not just with its oh-so-practical packaging, roomy interior and class-leading load space but also for its easy driveability, easy-to-live-with character and miserly fuel consumption. It will suit a range of users from young family units and active lifestyle players as well as those who need to carry grandchildren or equally-loved furry family members; and for each and every one of them it's got all the 'jazz' they could wish for! ~ MotorBar