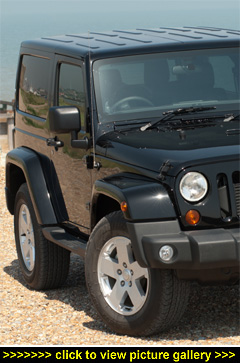 “Jeep. More deserving of the ‘iconic’
tag than probably any other make or
vehicle, it enjoys a strong off-roader
following all over the world. But, and
rather unexpectedly, it copes just
as nonchalantly with concrete jungles
as with the real McCoy...”

SOME SAY IT'S OLD FASHIONED, and point to the visual similarities with the original '40s Jeep — the classic round headlamps, the slotted grille and the exposed hinges. But, like its wartime workhorse ancestor, the latest Jeep Wrangler is built like it is for a purpose. In much the same way that a F1 racer is built to do a specific job, so too is the Jeep. And I don't hear anyone criticising the Red Bull RB7 for not having doors or a CD player…

Now look at the Jeep again and note the short front and rear overhangs, the high ground clearance, the open flared trapezoid wheel arches.
Look closer and you'll discover that the three-piece modular hardtop consists of left and right front panels and a larger rear section, all of which can be individually removed. As can the doors. And the front windscreen folds down. Get the picture?

Get down on your knees and peer underneath: one look at the separate 'ladder' chassis is enough to tell you that this Jeep is made to take the worst punishment possible off-road in its stride.

This so-called 'old fashioned' set-up also allows maximum suspension articulation in the rough which, combined with its can-do approach, departure and breakover angles (respectively 37.8, 31.6 and 24.5 degrees), lets it climb and clamber over treacherous terrain wherever it may be found. Which explains its 'best-in-class' off-road capability.

The fuel tank is located in the centre of the chassis between the frame rails and protected by a 2.5mm skid plate for added in-the-rough protection. Rivers won't stop it either — the Jeep can wade 19-inch deep water at 5mph.

So why would you want to drive one on normal roads? Let me quote one of those intrepid types who climb Everest and trek to the Pole with nothing more than a pack of Marmite sandwiches — because you can. Okay, that's a bit of a cop-out but the fact is that the latest Jeep also has a civilised, well-mannered side.

Swing open the short door — it opens wide but there's no stay to keep it open (mostly because this makes it easier to take off the door). Climb up (it's higher off the ground than it looks and the side-steps aren't there just for effect), settle back into the sports-shaped leather upholstered driver's seat and you'll be faced with a dash that could have been lifted from a no-nonsense family hatch. Did you really think it would be as stark as a battle-prepped HumVee?

Dials and controls are straightforward and self-explanatory; the combined audio unit and SatNav (2D/3D) is no-problem intuitive — located high up in the fascia, it minimises eye-time away from the road while driving.

The female voice issuing navigation commands is great — sexily 'Ab Fab', it will have the guys stabbing the button on the steering wheel (or the SatNav) to have her repeat them.

CDs or DVDs, incidentally, load in the slot behind the swivel-out touchscreen. And to scroll across the map, simply touch and slide your finger across the screen just like on a smartphone.

Also extremely useful for exploring uncharted areas is the 'record trail' feature — just touch the marked spot on the screen and you won't need the Forest Rangers to come find you!

Room in the front is better than the short doors would lead you to expect. And the commanding view from behind the wheel, essential for serious off-roading, is equally well suited to the cut and thrust of rush hour traffic. The front seatbelts adjust for height, as does the driver's seat, but the steering wheel only adjusts for rake. Even so, none of MotorBar's road-test team had a problem setting a decent driving position.

The front seats are ribbed with side bolstering and proved to as supportive as they look. And the big-enough-to-share centre armrest was appreciated by all drivers and front passengers, as too were the door-mounted outer armrests.

The A-pillars are fairly slim, the screen fairly upright and side windows deep so visibility is good to the front and sides, making the Jeep easy to place on the road. Rear vision is not bad but somewhat marred by the top of the full-size tailgate-mounted spare wheel and the rear screen's wiper unit.

Two will fit behind, although entering and exiting the back seats on the two-door Jeep models requires some flexibility because while both front seats tilt and slide forwards, it's still a bit tight getting past. Once there, it's surprisingly comfortable with good views out of the large side windows. A padded but clearly sturdy roll-cage steals some of the rear cabin space, but then it's there for your safety.

Removing the rear roof section converts the Jeep into a pick-up. Leave the roof in situ, fold and tumble the back seat bench forward, and you'll have a workable boot. With the rear seats in use, the boot is small but there's a generous in-floor storage bin. And if it helps, you can quickly remove the complete back seat assembly simply by pulling on a bar.

Other useful features include the lift-up all-glass rear screen/hatch, side-hinged lower tailgate, reversible cargo mat, removable carpets and wash-out interior (with drain plugs in the floor). For the record, the Jeep's alloys are the easiest to clean we've ever come across.

Off-road there's no substitute for torque. And the Jeep's revised four-cylinder 2.8-litre diesel engine pumps out a very ample 339lb ft of it at 1,600rpm — more than enough to get you though although 0-62mph in 12.9 seconds on the blacktop is not so slow even if it feels fairly relaxed served up via the five-speed auto 'box. There's also a manual mode and the top speed is 107mph.

You can hear the 197bhp diesel working, most of all when you heap on the revs; again, not an issue but just another part of the Jeep's overall charisma. Running at fast motorway speeds, it's muted enough and wasn't in the least disturbing even on several 150-mile trips.

A week's running around on country roads, motorways and regular visits to civilisation for supplies saw an overall average of 27.1mpg — officially it does 29.1mpg in the urban cycle, 39.8mpg extra-urban and 34.9mpg combined. Emissions are on the high side — 213g/km, so expect a large-ish road tax bill.

Underpinning the Jeep's off-road ability is a robust 4WD system offering 2WD for most on-road driving along with — and selected by shifting a secondary lever — high and low range 4WD.

For a hardcore 4x4 the ride quality is more than acceptable. The power steering takes a while to get used to and combined with a turning circle that's bigger that you'd expect given its compact length, quite a lot of wheel-twirling is called for in car parks. And you'll also need to get used to the long-travel accelerator — it needs a good push to get going; but then off-road the worst thing you can have is a hair-trigger throttle.

It's surprisingly pushy once you're acclimatised, cornering level and obeying your commands just so long as you don't try to drive it like a hot hatch. While the Jeep is breathtaking off-road, this all-American 4x4 can also be fun driving to and from where the wild things are. — MotorBar