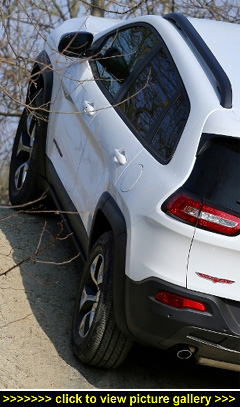 “Even though the all-American Jeep
brand, together with Chrysler
and Dodge, are now owned by the
Italian Fiat Group, Jeep continues its
long-standing sports utility ‘go
anywhere, do anything’ policy...”

AT THE RECENT INTERNATIONAL press launch of the fourth-generation Jeep Cherokee, held at Fiat's Balocco Proving Ground near Milan in Italy, the American executives of Jeep, whilst still keen to emphasise their products legendary 4x4 capabilities, had to concede that the latest model has a design which gives it more finesse — making the Cherokee more suitable for global markets such as Europe, where SUVs have become far more sophisticated.

But purists needn't worry — the new Cherokee will still be built in the USA. American Chris Ellis, head of the Jeep brand for Europe, says that "although the Jeep heritage covers over 70 years, the new global market Cherokee SUV has been designed to meet the requirements of European customers. They demand for their vehicles improved quality, higher safety, more refinement, the latest technologies, more fuel-efficient engines with less CO2 emissions, and with improved road driving manners — but still want Jeep's legendary off-road abilities.

"Despite adopting European standards we still do authentic SUVs better than anybody else. But being part of the Fiat family we can now draw on a wider range of components such as their 2.0-litre MultiJet ll turbodiesel engines with Stop/Start technology. And we can utilise platforms and other components from other Fiat family group products.

"However we take these items and adapt them to our needs so they are Jeep items and this new model, in design, construction and off-road performance, is a Jeep without compromise."

Which is why this all-new Cherokee uses a Fiat group platform lengthened and strengthened from the one used for the Fiat Giulietta hatchback and other similar Fiat-Chrysler family models. European sales of the new five-door Jeep Cherokee SUV begin in left-hand drive markets in April — UK dealers will start selling them from the end of May for deliveries in June this year (2014).

Instead of the slab-sided, boxy-shaped styling of the previous generation Cherokees, the new fourth-gen models use a platform and monocoque construction rather than a body-on-chassis design. With the use of lightweight, high-strength steel this makes the Jeep SUV more agile both on- and off-road.

The new Cherokee is fronted by a updated version of the iconic seven-slot Jeep 'Waterfall' grille, which uniquely these days is part of the sculptured bonnet. There's the usual gently rising high SUV waistline and the side doors are also deeply sculptured. At the rear a hefty tailgate gives access to a 412-litre boot which also has an additional 70 litres of space under the load floor.

With the 60:40 split, folding/sliding rear seats lowered, maximum load space is 1,267 litres. Towing was usually a big requirement of previous Cherokees and, depending on the model, the newcomer has a braked towing ability for between 1,800 and 2,500kg.

Inside the Cherokee you'll find Jeep's usual high level of standard equipment. The build quality and the feel of the materials look much better, and the layout of the instruments and controls has obviously been influenced by European competitor rivals such as the Honda CR-V, BMW X3, Audi Q5, Freelander, and the Mitsubishi Outlander.

The high-line fascia with its leather-look stitched vinyl trim looks well padded and has a chunky appearance. So do the seats, with large bolsters which provide good support, and there's a thick leather-trimmed steering wheel. Much emphasis has been placed on reducing noise intrusion into the vehicle with better insulation and the use of acoustic glass; that this has succeeded is very noticeable.

Much emphasis is now placed on safety features and these include seven airbags, rollover mitigation, ABS with off-road function, forward collision warning, adaptive cruise control, lane departure warning, blind spot monitoring and rear cross-path detection. Following the European market trend, there are lots of extra-cost options so the vehicle can be personalised as much as your budget will stretch — over 100 accessories produced in conjunction with Mopar are available and these include an in-car dog kennel and an outdoor awning for humans!

Crucially, the on-road handling has been vastly improved over previous models thanks to an independent front suspension and multi-link rear set-up which, in conjunction with the passenger car platform, works really very well, even with the large 18-inch wheels.

The power steering is now electronically controlled giving sharper response although it feels heavy and the feedback is still lacking. Whilst it's more comfortable to travel in, the new Cherokee still feels on the lazy side for handling — more cruiser than bruiser.

That said, the suspension easily mopped up the impacts the worst of rural Italian roads threw up during our test drive; and off-road the suspension took away the worst of the shocks. Where the Cherokee scores over most European rivals is the length of suspension travel it has, so chassis articulation off-road is impressive. It might not be as sharp in the on-road handling department as some of its Euro rivals but there's no doubt that it maintains Jeep's legendary off-road abilities.

The 140hp 2.0-litre turbodiesel is available with two- or four-wheel drive and a six-speed manual gearbox. Its 4WD system runs in front-wheel drive most of the time but, on- and off-road, automatically switches to 4WD when conditions for extra grip demand.

The 170hp 2.0-litre turbodiesel is fitted with ZF's new 9-speed automatic gearbox as standard and is available with 2WD or 4WD.

In addition to that there's a choice for 4WD versions of Active Drive 1, which is a single-speed drivetrain with no low-ratio transfer box; Limited spec models have Active Drive 2 which does provide low-range. The various Active Drive settings are operated through a turret-style control switch mounted on the centre console.

Driving both diesel units over the hilly rural Italian roads there really wasn't much to choose between them: both are relatively quiet and responsive. The six-speed manual 'box mated with the 140hp diesel unit gives smooth changes with well spaced ratios.

The new 9-speed auto partnered with the 170hp engine did not have the same seamless gearchanges as the similar ZF 'box used in the Range Rover Evoque, but the Cherokee's close ratios are selected quickly so there's no power or momentum loss between gearshifts.

The 140hp MultiJet turbodiesel unit generates 258lb ft from 1,500rpm; top speed is 118mph and zero to 62mph takes 12 seconds for the 4x4 versions. As for fuel economy, the 140hp engine with a manual gearbox and 4x4 traction will return 50mpg in the Combined Cycle — we achieved 41.3mpg on test.

Reason to buy include: designed to meet European market requirements and not anymore just an all-American rock climber with dubious on-road handling, smooth Fiat diesel power units, comfortable ride, lots of safety kit, good specification, improved build quality and interior finish, first class off-road agility. However, it's not as sharp in the handling department as a Range Rover Evoque or BMW X3, making it a more leisurely cruiser than bruiser for on-road driving.

The new Cherokee is an important addition to the Jeep range, occupying the middle ground in their line-up. The larger heavyweight Grand Cherokee was refreshed last year and UK sales are up by 64%.

Globally Jeep sold 731,000 vehicles last year — their fourth record year in succession — so the future looks brighter for the Jeep brand under the patronage of the Fiat-Chrysler partnership. Currently Jeep has 57 dealerships covering 70% of the UK but by the end of 2015 the network will be expanded to 72 outlets, providing coverage for most of the country. A good time to buy then! — David Miles