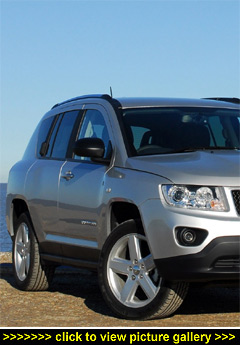 “The iconic American Jeep brand
is celebrating its 70th anniversary
in 2011 and the first of a raft of new
models — on sale this week with
on-the-road prices from Ł16,995 to
Ł23,995 — is the new Jeep Compass
range of two- and four-wheel drive
compact SUVs...”

LAST YEAR THE JEEP BRAND, together with Chrysler, came under the ownership of Fiat Group Automobiles Italy. The Chrysler Jeep alliance with Fiat follows several ill-fated partnerships with other manufactures but worst of all the brands were hit hard by the global recession, the increase in oil prices, the high running costs of 4x4s and large-engined models and, in the UK, the anti-4x4 lobby.

The new Compass continues Jeep's long-standing iconic heritage of SUV vehicles but this updated range is the first line-up ever to offer two-wheel drive models as well as 4x4 versions, reflecting the fact that between the years 2,000 and 2010 in the UK, the segment, which includes crossover SUV types, has grown nearly threefold from 50,000 sales a year to 140,000 last year.

In the cabin you'll find wide use of soft-feel upmarket trims with leather upholstery and a high-end sound system with multiple speakers for top spec models but, as in the past, even the lowest specification models still come very well equipped as standard. Customers can choose from four trim levels: Sport, expected to take six per cent of UK sales; Sport+ with 25%, Limited (55%) and 70th Anniversary variants 14%.

Three different engines are on offer: two petrol and one diesel. These have four power outputs and deliver significantly improved performance and economy over the powerplants they replace. Two thirds of sales are expected to be for the new 2.2-litre CRD turbodiesel unit. This comes either with 134bhp or as a high-output 161bhp version. It's an in-line four-pot Mercedes-Benz engine featuring the latest common rail technology and has been co-developed specially for the Compass.

The petrol engines can be either 2.0 or 2.4-litre with 154bhp or 168bhp and are Chrysler's 'World Engines'. Both feature dual Variable Valve Timing by twin overhead camshafts. The 2.0-litre petrol engine drives through a five-speed manual transmission, has 2WD and around 25 per cent of customers are expected to go for this price-led model.

The 168bhp 2.4 petrol engine has a CVT automatic transmission plus Freedom Drive I as standard and will take around 9% of sales. 2WD-only Compass models are expected to account for 40% of UK sales.

Jeep is, of course, famous for its legendary go-anywhere ability — and with its Freedom Drive I system the Compass is no different. FDI is a full-time active 4WD system featuring a locking mode that provides reassuring performance in low traction conditions. During normal driving, power is sent to the front wheels in order to save fuel.

However, the system automatically moves power from the front to the rear axle as needed as soon as wheel slippage is detected. The system also features a locking function to send an equal amount of power to the front and rear for maximum traction in demanding terrain — operating the T handle on the centre console disables the automatic function and enforces a torque split of 50:50 between front and rear wheels, enabling the driver to cope with deep snow, sand or other slippery surfaces.

Jeeps are also well-known for their high standard specification. Every Compass model has automatic climate control or air conditioning, leather upholstery is standard on the top grade versions as too are heated front seats and an electrically-operated driver's seat. All models feature chrome rings surrounding the air vents, illuminated cupholders in the centre console, leather-wrapped handbrake and steering wheel, LED backlit gauges and a new rake-adjustable steering wheel with built-in controls for the sound system, cruise control and handsfree 'phone.

Electric windows are standard throughout, the power-fold mirrors are heated and there's remote central locking. The electronic vehicle information centre incorporates a trip computer and displays key info such as average mpg, distance to empty, a compass and the outside temperature. All models have alloy wheels.

Sport and Sport+ models feature a Media Centre CD player with MP3 compatibility, while the Limited and 70th Anniversary versions add a 6-CD system. All models come with four speakers and an audio jack for connecting MP3 players. Owners of Sport+ models and above get a USB socket and can connect their mobiles and use them handsfree with Uconnect Bluetooth. The Uconnect sound and navigation system is available as an option on Limited and 70th Anniversary versions.

And to ensure music fans get the most out of their stored tunes, the sound and navigation option incorporates a Boston Acoustics premium sound system. This features an eight-channel, 368-watt amplifier with nine speakers including a powerful subwoofer. Speakers that flip down from the tailgate when it's open allow owners to enjoy their music from outside their car too.

High specification aside, the main idea behind the Jeep Compass has been to get all the basics right.

The rear seat is a good example — it has plenty of leg, head and shoulder room for three people and the backrest will recline through 12 degrees for better relaxation; it also splits 60:40 and folds forwards and flat to make the most of the load space. With the rear seats in use, luggage room — although not the largest in this segment — is an adequate 458 litres. With the seats folded down this increases to 1,269 litres.

My very brief 'first drive' was in potentially the best-selling new Compass 2.2-litre CRD turbodiesel Limited 4x4 version costing Ł23,595, which just about undercuts most of the main competition. The initial impression of the 161bhp turbodiesel engine from Mercedes-Benz was its refinement. Despite the high gearing in the six-speed manual 'box (adopted for good fuel economy and lower CO2 emissions), it was responsive and untroubled. Having peak torque of 236lb ft from only 1,400rpm made it easy and forgiving to drive.

Officially, average fuel consumption is 42.8mpg and my test car returned 36.2mpg driven over a short journey taking in winding country roads, dual carriageways and some stop and start town traffic. The CO2 emissions of 172g/km means a high road tax bill of Ł265 in the First Year and then Ł190 for the second year onwards — significantly higher than a Nissan Qashqai 2.0-litre diesel 4x4 and also higher than manual transmission versions of the 2.2-litre diesel Freelander.

The handling and ride comfort are not up to the standard set by the main 'soft' off-roaders in the sector. The ride is firm and made worse by the 18-inch alloy wheels on the top spec models; although there were no test versions available with 17-inch wheels, I suspect they will offer a more comfortable ride. But the new Compass, like all Jeeps of the past, is no 'softy' 4x4 — it is absolutely the 'real-deal' in strength, durability and robustness so the firm ride was to be expected.

Other fine handling SUV/4x4s have driven sales in this growing market sector and the Compass follows rather than leads in outright ability and refinement. It also incurs high taxes, has as yet unproven residuals and is currently serviced by a small dealer network (Chrysler Jeep already has 48 UK sales points but by the end of 2012 this will have grown to 70 dealers and a projected 90 in 2014).

On the plus side it has smart, clean-cut new Jeep styling, an iconic seventy-year heritage, strong engine, good all-wheel drive system, should be good off-road and reassuring on Winter roads, is well equipped and the brand is now under new European ownership.

Overall, the Compass looks well put together and a definite improvement in design inside and out. With the limited numbers Jeep expects to sell in a growing market, I believe it will meet the demands of hardcore 4x4 enthusiasts who enjoy such vehicles — especially throughout the UK's unpredictable Winters. — David Miles