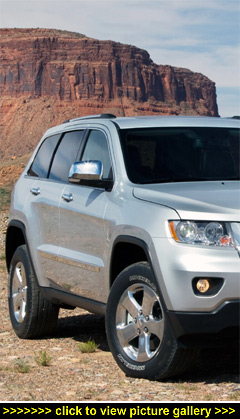 “Happy birthday, Jeep! Seventy
this year. And to celebrate, Jeep is
unwrapping a whole load of
presents in 2011, with a launch
spree that includes an all-new
Grand Cherokee...”

THE BRAND CERTAINLY NEEDS SOME GOOD NEWS. Jeep sold just 15,000 cars in the whole of Europe last year, which is pretty dismal. But get this: within two years, the American brand hopes to be selling ten times that number thanks to new models — including, for the first time ever, a Nissan Juke competitor in 2013.

Heading the charge of fresh models is an all-new Compass, a compact SUV that is now as impressive as the old model was utterly forgettable. The Wrangler — the hardcore workhorse of the range — has also just been lightly revised, but remains an off-road king.

But it's the all-new Grand Cherokee that's the 'halo' model; the one that combines Jeep's all-terrain credentials with premium status (and price).

The Grand Cherokee certainly looks distinctive. A sporty profile cleverly conceals its size and weight (it's 7cm longer and 6.8cm wider than the old Grand Cherokee and weighs almost 2.5 tonnes). The sweeping glasshouse line looks stylish and there's a certain aggression to the seven-bar-grille front end. I'm not so sure, however, about the profusion of shiny chrome bits. But then I guess if you like American style, it's no problemo…

Inside, the new Grand Cherokee is much improved over the previous long-running generation. There's lots of decent quality leather inside — the top-spec Overland gets hide all over the dashboard — and the electronic 'toy' count is high. Despite this, it's hard to believe Jeep's claim that it's been voted one of the world's top ten interiors: there's still too much hard plastic and sharply-finished trim edges.

Star of the new range is the 3.0-litre CRD diesel engine. This is an all-new six-cylinder diesel which uses Fiat Multijet II technology to very good effect. With 241bhp and a meaty 405lb ft of torque, it's a smooth, willing and very refined powerplant.

Unfortunately it's mated to a rather soggy five-speed automatic gearbox (an old Mercedes transmission, shared with the old Grand Cherokee), which now feels very antiquated. Even switching to Sport mode doesn't improve performance greatly. Nor is it very economical — during my test drive I averaged just 17.7mpg on a mixed test route (compared to a claimed 34mpg).

Neither is this an SUV that will trouble a BMW X5 in handling terms — the suspension may be all-independent (unlike the articulated axles favoured by hardcore off-road vehicles such as the Wrangler) but it's set very soft.

Combine this with electro-hydraulic steering as light as a daytime TV soufflé and you have a recipe for a dish that falls apart as soon as you press it.

Despite the soft suspension, the low-speed ride is actually rather joggly — not great for a car aimed at the luxury market. That said, at speed it does become much more comfortable.

There's another issue at speed: noise. Although the engine is impressively quiet, wind noise is audible from as low as 30mph and by the time you've reached motorway speeds, it's blowing a gale out there. And it's not really improved by the air suspension (fitted on top-spec versions), which can be set low for better high-speed aerodynamics.

But there is a silver lining. The trade-off for wallowy on-road behaviour is phenomenally good ability off-road — in this respect, it's an easy match for the Range Rover Sport. Quadra-Drive II 4x4 includes a rear limited-slip diff that transfers torque between the rear wheels, as well as between front and rear axles. At Jeep's new test facility in Italy, it proved its credentials to me by climbing a 70-degree slope.

The new Grand Cherokee goes on sale in the UK in June at prices yet to be announced, but estimated to start at around Ł36,000. That's less than most of the opposition (BMW X5, Audi Q7, Merc M-Class, VW Touareg and Range Rover Sport). But then most of those rivals have palpably more on-road talent and make more convincing luxury SUV choices. — Chris Rees