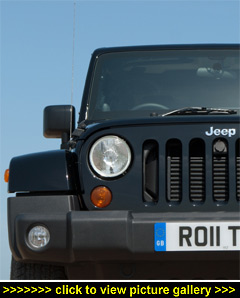 “Now owned by Italian automotive
group Fiat, the all-American Jeep
celebrates its 70th anniversary this
year. So does that make the latest
2011 Jeep Wrangler memorable —
or memorabilia?”

RECOVERING FROM THE DECIMATION of the US motor industry caused by the global recession, the hike in oil prices and the anti-4x4 lobby, Jeep models in the UK currently sell in their hundreds rather than their thousands — but expansion is on the horizon.

For a start, dealers are being increased from the current 46 to 70 by the end of 2012. By 2014 there will be 90, by which time a much wider product range will be in showrooms. UK sales so far this year for all Jeep models total around 1,200 — in other words, Jeep remains a niche brand which explains why only 220 Wranglers will be available for UK customers this year.

Nobody can be in any doubt as to the iconic Wrangler's DNA — it can track its heritage all the way back to the original Willys jeep of 1941 that went to war and saw action with American and Allied forces. After WW2 the Willys jeep became Jeep and became one of the forerunners of today's 4x4/SUV vehicles.

Two- and four-door Wrangler models cover two extreme sectors: firstly in a workhorse capacity, competing against the standard and long wheelbase Land Rover Defenders and 4x4 single cab pick-ups. However, they are more likely to appeal to lifestyle owners where they compete against most other 4x4s and large numbers of double cab pickups

In its two-door form, the Wrangler still appeals to a minority of hardcore off-road enthusiasts — due to its immensely strong chassis (with separate body construction), huge suspension travel and durable 4x4 traction, it makes a supreme off-roader.

But, due also to its iconic retro styling and a wide range of styling accessories, it also appeals to fashion-conscious buyers — so is likely to be spotted 'cruising' the streets of St Tropez, Monte Carlo or Brighton.

Just like its two-door stablemate, the extended four-door, five-seater version retains authentic Jeep core mechanical and styling features such as huge suspension travel, solid axles, removable doors, exposed hinges, a fold-down windscreen and removable convertible hard or soft tops. The Wrangler four-door is also unique in that it's the only four-door convertible 4x4 on the market.

For 2011, the two- and four-door Wranglers are being offered in three versions: Sport, Sahara and 70th Anniversary. All are powered by a 197bhp 2.8-litre CRD four-cylinder turbodiesel. The Sport version runs with a six-speed manual 'box with stop-start function and pumps out 302lb ft of torque. Sahara and 70th Anniversary models come with a five-speed automatic transmission with torque increased to 339lb ft from 1,600rpm.

Standard equipment on all versions is the Command-Trac transfer 'box that allows for the manual selection of 2 or 4 wheel drive high ratio on the fly (4WD low ratio gearing has to be selected whilst stationary).

All models also have Traction Control and, additionally, Sahara and 70th Anniversary models gain Hill Descent Control for downhill driving without braking. Hill Start Assist for all versions holds the vehicle stationary for up to two seconds; long enough for the driver to safely move his or her foot from the brake pedal to the accelerator. The Wrangler also has power steering, variable-mode selection electronic stability control, multistage airbags, halogen headlights and tyre pressure monitoring.

Despite all the safety kit and softer spring rates to improve on-road ride comfort, the Wrangler hasn't been sanitised too much and retains its body on a strong chassis with underbody protection plates and heavy-duty, long-travel suspension with gas-filled shock absorbers and front and rear anti-roll bars.

Not much has changed externally for the 2011 Wranglers — they are still fronted by the set back, six-bar vertical slatted grille flanked by circular headlamps underlined by a prominent front bumper and, at the side, huge wheel-arch extensions and steps.

The Wrangler's all-new interior retains the high level fascia 'retro' styling, but generally the ergonomics have been improved and the quality of the materials and trim upgraded so it now can compete against modern 'softer' 4x4s and the popular double cabs.

The Wrangler also scores over its hardcore Land Rover Defender competitor by giving the driver and front seat passenger much more room between the seats and the fascia. That said, the Wrangler driver will not appreciate the lack of space in the footwell — there just isn't anywhere to comfortably place your left foot. For the record, the two-door version offers boot space of 142 to 430 litres and also benefits from a lift-up glass rear window over a low, side-hinged tailgate door.

The Wrangler also doesn't transfer well from its heartland left-hand to right-hand drive design; both the transfer 'box lever and the handbrake are positioned for easy reach for the left-hand drive layout. Good news is that noise intrusion into the cabin has been improved and the bigger rear and rear-side windows offer better visibility.

Despair not — the Wrangler hasn't gone totally soft. As an off-roader — particularly over rocky terrain — its performance and capabilities remain immense. However, these days that's a very limited niche. Today's market for the Wrangler has more to do with exclusivity, 'hardcore' showmanship, and fashionable 'country' lifestyle — even if it spends its entire life in towns and cities.

Despite all the improvements, the 2011 Wrangler is a far cry from the driving refinement offered by virtually all other SUV/4x4s. In point of fact, it's very much on a par with the Land Rover Defender — its only real competitor still running in today's rugged 4x4 market sector.

I have just driven a 70th Anniversary two-door version, priced at Ł27,595 (the family-sized four-door costs Ł28,995). Although the outstanding off-road capabilities are still there, this version is all about fashionable on-road style; it's very much a 'look-at-me' model.

Of course, this Anniversary version is not going to be a major seller — many will be added to motoring collections and no doubt a few 'celebrities or 'wannabe' owners will use them as high-profile personal transport. For me, the two-door Wrangler was a drive down memory lane; a nostalgic trip back to what driving was really like a few decades ago.

The Wrangler is still great off-road, the interior is well equipped and seems well put together and there is no doubt it's a distinctive set of wheels. But although it is Euro 5 compliant, the diesel engine comes from a past age: it's noisy, slow, and not very economical and its high CO2 emissions incur heavy taxes.

Being mated to an old-tech five-speed automatic doesn't help; gearshifts are slow and ponderous. Zero to 62mph takes 12.9 seconds and the maximum speed is 107mph. Officially, the Combined Cycle fuel consumption is 34.9mpg but the best I saw was 26.9mpg.

Worst of all the CO2 emissions are 213g/km — the First Year road tax costs Ł580 but it does reduce to Ł260 from year two onwards. Should this all-American Wrangler Jeep find itself being driven as a company car, then the Benefit-in-Kind tax bandits will charge you 35 per cent for the privilege.

On-road handling is all 'rock 'n' roll' — understandable because of the high ground clearance and long travel suspension — and there's little feedback from the vague steering. Neither do the 18-inch wheels help as wheel-wobble is induced after hitting deep potholes and the big wheels and fat tyres faithfully try to follow all the ridges and cambers present on our poor-quality roads. The smaller 16- or 17-inch wheels would be better.

However, bearing in mind it is a heavyweight 4x4, the ride comfort isn't too bad. I was amazed though, given just how tough and strong the Wrangler is, at how low the maximum braked towing weight is for all models: just 1,000kg. That's a third of what other 4x4 heavyweights can tow, so boat, caravan, and horse trailer owners are not likely to be customers.

Buyers have to accept that it's slow and noisy, has vague steering and rock-and-roll handling, a very low towing weight (for a 4x4) and high emissions and taxes. In return they get a durable 4x4, iconic Jeep styling, fantastic off-road ability, and a much improved interior.

Such is the strength of the Wrangler's image that I was left feeling that a potential owner would have to suit the Wrangler rather than the other way round. It was indeed memorable to drive for many reasons, but in reality it's a piece of motoring memorabilia. — David Miles