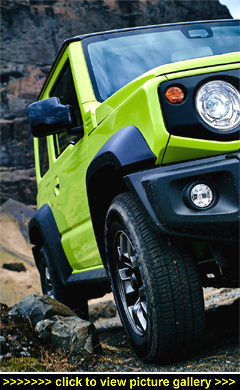 “Semantics! To boldly go or to go
boldly? You know what, who cares
as long as people know what you
mean. And clarity is what Suzuki’s
brilliant new Jimny is all about...”

YOU DON'T HAVE to ask what it is the Jimny does because the moment you clap eyes on one you get exactly what its mission statement is — to boldly goģ anywhere!

Looks-wise the Jimny's iconic and brutally functional design is cleverly packaged to honour Japan's endearing Kei car parameters (a class of car conceived to favour overcrowded cities where parking spaces are as rare as hen's teeth).

While there's no denying its looks call to mind aspects of a Mercedes G-Class off-roader, it's nevertheless an artful and appealing design in its own right that triggers — even in drivers who have never had the least inclination to own a 4x4 — an unexplainable 'me-too' longing. For those swayed by metropolitan memes of downsizing and retro design, the Jimny's ³ber-citified footprint is the cherry on the cake.

In addition to its delectably boxy architecture there are signature circular headlights, a distinguishing five-slot vertical grille and clamshell bonnet, and 4x4 trademarks such as an externally-mounted full-size spare wheel on the tailgate and chunky square-cut wheel arches.

And it's the Jimny's authentic 'go anywhere' character that defines it. Underpinning the Jimny is a tough steel ladder frame chassis with three-link, rigid-axle coil-sprung suspension at both ends; there's also a low-range transfer 'box for professional-grade off-road action, hill descent control, and all-season Firestone tyres. All of which boosts its appeal to adventurous lifestyle and Gore-Tex-wearing outdoorsy types.

Small it may be but far from the beaten track that's great news as anyone will tell you who's tried threading a large, expensive SUV through wooded terrain. For the compact Jimny this just adds to the fun as it unerringly picks it way down slippery inclines or, courtesy of its low-range gearbox, hauls itself impressively up the steepest hillsides.

It helps enormously that along with great axle articulation the Jimny has also got 210mm of ground clearance and can climb over most obstacles courtesy of its 37-degree approach angle and generous ramp breakover (28 degrees) and departure angles (49 degrees) — better than some full-on 4x4s. Wading and puddle-hopping on boggy trails is not a problem either.

Make no mistake, the Jimny is not merely a cheeky lifestyle accessory but a real 'working' tool that will take you just about anywhere. More good news for seasoned off-roaders: the good-to-grip three-spoke steering wheel is connected to an electrically-assisted recirculating ball rack set-up that, while it can make for a tad more wheel-twirling on the road, minimises the chances of a badly wrenched or even broken thumb should you slam into a big rock or a front wheel plunges into a deep rut off-road.

In addition to its small footprint (3.65 metres nose-to-spare-wheel-cover) other properties that work to its advantage off-road include a low kerb weight and impressive 'mountain goat' agility, all of which make it brilliantly manoeuvrable scrambling over the trickiest terrain. The selectable low-range transfer 'box is switched manually via a lever close to your left thigh: you can shift from rear- to four-wheel drive on the go (up to 62mph) although engaging 4WD-low 'crawler' ratios needs a full stop to take effect.

There's no diesel option and the default powerplant is a four-pot of 1,499cc capacity. A naturally-aspirated drinker of unleaded, it musters 99bhp backed-up by 95lb ft of torque. Not huge figures but, as we've already mentioned, it weighs-in at a welterweight (for a hardcore 4x4) 1.1 tonnes.

On the blacktop that's enough to clock zero-to-62mph in 12.9 seconds and reach a top speed of 87mph. The official Combined Cycle figure is listed as 37.7mpg but the Jimny is actually more frugal than that — our week's spirited testing saw an overall 39.6mpg average recorded for the auto.

The four-speed autobox is a smooth operator and offers '2' and 'Low' settings along with the usual 'Drive' so two-pedal driver's get more control when towing. It's a game engine, this 1.5-litre, and you'll find no difficulty zipping along in traffic — in fact, ducking and weaving in town always triggers a smile.

Going above the UK's legal limit is doable but the Jimny bowls along most happily (and not so vocally) at 60mph in the middle lane, which on today's motorways is more often than not the best place to be to cover distances rather than put up with all the stressful brake-accelerate-lift-off-accelerate shenanigans drivers in the outside lane are forced to put up with. And while long distance trips are on the menu, as with any small car, they're not something you'd really want to undertake on a regular basis.

The Jimny's angular-cut body maximises inner space and from inside there's enough to go around. Settle in the lightly bolstered but supportive cloth-upholstered driver's seat and you're faced with a sporty-looking wheel and a Hummer-esque fascia with the central infotainment touchscreen set sensibly high on the dash and, to its left ahead of the wheel, two individual 'glowing' dark orange-on-black dials; all three items are encased in military-look pods with exposed Allen bolt fixings. A multi-mode driver's computer display separates the speedo and rev-counter.

When you need it, the SatNav is a doddle to use; the mapping is clear and sharp, and the posted speed limit is recognised and shown on the trip display just to be sure you're aware. Helpfully there's voice control for media, navigation, and phone; you'll also find Android Auto and Apple CarPlay for smartphone mirroring, a DAB radio, Bluetooth connectivity, and a CD tuner.

No-nonsense switchgear and controls (particularly for the efficient air-conditioning) are easy to reach and easy to use, even when being jostled off-road. At such times your front passenger will be sure to appreciate the sturdy grab-bar above the glovebox as well as the fist-and-a-half of headroom.

One of the first things you're aware of on pulling away is the excellent visibility courtesy of the generously-glazed upright front and back screens and side windows. The multifunction wheel only adjusts for rake/height and not reach, but a variety of MotorBar's test drivers all found themselves perfectly accommodated.

In-cabin storage is addressed by a usable glovebox, slim door pockets (no bottles but a hip flask should fit!), and a duo of cupholders between the seats. Another plus point is the quickly removed rubber floor mats — after a day in the great outdoors, just whip 'em out and hose 'em down.

Access to the rear pair of seats is via the front doors but that's not a problem. The Jimny can seat four adults in reasonable comfort although if you need a decent boot then it's one or the other. The two back seats are adult-sized plus there's decent legroom and they provide good views forward as well as out to the sides. There's also elbow and head room aplenty — one of the benefits of that flat roof. School runs for two or three youngsters are on the cards and lifestyle weekenders for two definitely so.

Interestingly — and completely unexpected — is that the front seatbacks can also be folded flat to join up with the folded down rear seats to create a temporary bed (or room for carrying longer objects). Not quite a motorhome, but useful if your tent's been trampled by longhorns.

On the black stuff the Jimny is a hoot to drive. Get too boisterous and the off-road-friendly solid axles and high centre of gravity will bring on some squealing from the rubber and attract even more attention than its captivating looks. But drive sensibly (and why wouldn't you?) and everything will be tickety-boo.

Other strong points that make the Jimny rewarding to drive in traffic are its wheel-at-each-corner arrangement, ³ber-compact dimensions and commanding driving position which come together to deliver easy-to-place slotability. Parking is a breeze — so it's totally understandable Suzuki don't fit parking sensors!

The Jimny's no Jag but then no Coventry Cat could ever be as much at home in the jungle. However, when it comes to ride quality the Jimny's, while busy, is generally liveable although big potholes will be heard and felt — best to watch what's coming up on-road as keenly as you would off-road. That noted, at quick urban speeds the suspension does a fair job of ironing out the surface. Again, remember that it's in the wilderness that this engaging 4X4 truly rules.

With the rear seats in use there's not much in the way of luggage space (85 litres; still good enough for a pair of squashy overnight bags) so ultimately it's a choice between two people plus 377 litres of luggage or four travelling light. Folding the 50:50-split seatbacks frees up 830 litres of load space with wipe-clean loading surfaces — all easily accessible and usable thanks to the full-width side-hung rear tailgate that opens the right way for UK pavements.

On the other hand, you could seat three and still carry some luggage. Or there's another option: despite the diminutive looks, if you've got a mind for some towing then the Jimny will be up for it — a practical 1,300kg braked!

Suzuki aren't going to ask you for Ż25,000 — the norm for a small car with all-wheel drive — for one of their tough little Jimnys; they're not even asking Ż20K. No sir, but they will be more than happy to sell you one from just Ż15,499. Form an orderly queue here, please! ~ MotorBar