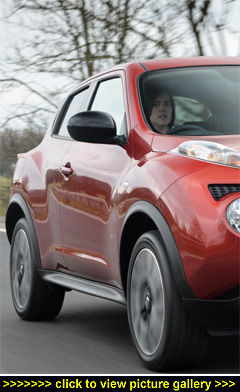 “Nissan’s compact SUV, the Juke
five-door launched a little over three
years ago, has brought an amazing
85% of new customers to the Nissan
brand — so, is it all just about must-
have styling?”

THE 'REFRESHED' JUKE recently made its debut at the Geneva Motor Show ahead of sales starting later this year in August. It's not radically different — basically with restyled lights and bumpers, a larger boot and the introduction of an updated 1.2-litre turbo petrol engine — so the current Juke will still not look outdated.

The new versions will be launched with a now seemingly mandatory expanded personalisation programme of extra-cost options which will push prices up. But that's good news for 'now' buyers because with a newer version just around the corner there will be some bargains to be had as Nissan dealers make way for the forthcoming 'new' Juke.

I haven't had a lengthy spell in a Juke since its introduction three year ago, so it's apt that I found time to sample the current one — a 1.5 dci turbodiesel n-tec 2WD, officially priced at Ł17,790.

The Jukes sold in the UK are virtually all with front-wheel drive but there are four-wheel drive options with the 1.6 DIG-T petrol 187 and 197bhp engines and a CVT auto transmission. For FWD models there is the choice of 1.6-litre (92 and 115bhp) petrol engines and the sweetest and most fuel-frugal of them all: the 108bhp 1.5 dci turbodiesel.

Depending on the engine chosen there are Visia, Acenta, Acenta+, n-tec, Teckna, and the sporty Nismo levels of specification.

It's hard to 'knock' the Juke — people like the status of owning a SUV, even a small one with only 2WD. The Juke has to be credited with starting the boom in demand for supermini-sized SUVs or crossovers and the majority of the industry have already, or are now, jumping on the bandwagon to introduce their own models — but how long will the craze will last? In real terms it is cheaper to buy and run a car-based supermini-sized hatchback but, as so often is the case, style trumps practicality.

This urban SUV is an easy vehicle to drive: with its high seating position giving good visibility and being a shade over four metres in length, the chunky but funky Juke is easy to park. From my perception owners tend to be younger, style-impressed singles and couples, or older empty-nesters. Even with its five doors, families will find the compact interior's rear seat space limiting.

With the rear seats in place the boot is not that family-friendly — the sloping tailgate limits luggage to 251 litres although folding the seats boosts this considerably: to 830 litres if you load to the roof. The next generation Juke has a longer roofline and a more vertical tailgate, so the load capacity will be a little better.

What can't be denied is that with its compact chunky stance, bulbous front light clusters, a heavy looking body beneath a high waistline, shallow side windows and short length roof, the Juke's exterior styling is very noticeable.

Inside, the front is nicely laid out with logical controls and nicely supportive seats. However, the shiny plastic trim feels hard and looks cheap, and is prone to being scratched leaving telltale signs of careless or hard use.

It's a good package with the only downside being the 18-inch wheels; in my opinion, too large for a vehicle of this size. Yes, they look good but they also give the Juke a very firm and jittery ride. Again, an issue of style over practicality. Roadholding is generally good with the tall body producing some predictable cornering lean although the choppy ride is the Juke's least favourable characteristic.

The 1.5-litre, four-cylinder turbodiesel engine is well known in other Nissan and Renault models and produces 108bhp alongside 191lb ft of torque from 1,750rpm. In the Juke it performs best in the mid-range, giving good response without having to constantly change up and down the slick action six-speed gearbox.

With a top speed is 109mph, it has ample power to maintain motorway cruising speeds without too much stress; the zero to 62mph acceleration time is an adequate 11.2 seconds. Officially, this front-wheel drive Juke will return 67.3mpg in the Combined Cycle. My test driving (taking in two long motorway journeys) resulted in a figure of 49.1mpg overall. Pushed less hard on A/B country roads, with some town driving, the figure was in the mid-50's. CO2 emissions are 109g/km so road tax costs you nothing for the first year; and after that it's just Ł20 a year.

Reasons to buy are its young-at-heart styling, lookalike SUV ownership status, higher ground clearance, good front visibility, and it's also easy to drive and park and some versions have appealingly low prices. Not everyone will like the firm and jittery ride, limited rear seat leg and headroom, restricted rear/rear-quarter visibility, and hard interior plastics. And it didn't come close to the official fuel economy figure.

Overall I can see the appeal of a Juke but it's a little too bold and brash in the styling department for me. This will not always apply to urban dwellers, but if it looks like an SUV it should really have a 4x4 drivetrain, especially given the amount of rain we have suffered from and the perilous state of our roads all the year round. — David Miles