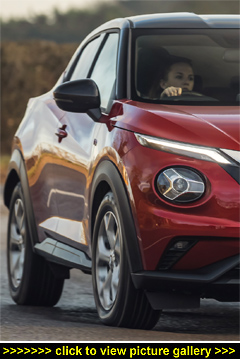 “The new generation Nissan Juke
is here and it’s still setting the pace —
sharper looking, this compact
crossover now comes with a wider
choice of those all-important
personalisation options...”

THE FIRST GENERATION JUKE sold in huge numbers — over 1.5 million found homes globally — not least because it brought the then aspirational idea of five-door SUV styling to the masses of car buyers who previously had opted for supermini-sized hatchbacks.

Prior to the Juke there had been small boxy-shaped SUVs and 4x4s, mainly from Japanese manufacturers like Mitsubishi, Suzuki and Daihatsu because of their 'K' class popularity in traffic and people-congested Japan. However, it was the quirkily styled Juke that opened up a whole new market sector and brought SUV/Crossover styling to the motoring masses.

The original Juke kicked off a whole new sector that was quickly colonised by the likes of the Renault Captur, Vauxhall Mokka X and Crossland X, Peugeot 2008, Citroen C3 Aircross, VW T-Cross and T-Roc, Audi Q2, MINI Countryman, Skoda Kamiq, SEAT Arona, Fiat 500X and many more including the current trend to apply taller suspension and plastic SUV-style body-cladding to small run-of-the-mill family hatchbacks. And there are still more compact SUVs to come with Alfa Romeo about the capitalise on their partnership with the PSA Group and use platforms and technology from models such as the Peugeot 2008 and C3 Aircross for their version; Toyota is also bringing a small SUV to market based on their Yaris supermini.

Still built in Britain the new five-door Juke is larger, retains its sporty styling but now includes a wider choice of those all-important personalisation options. It also offers new driving support technologies such as Nissan ProPilot and connected services and over-the-air updates making it 'the most connected' Nissan ever.

Initially the new Juke is available with just one engine — a new 1.3-litre DIG-T 117hp 3- cylinder turboed petrol unit with manual and 7-speed dual clutch automatic transmissions choices. There are no 4WD variants.

The new Juke uses the latest Renault-Nissan-Mitsubishi Alliance CMF-B platform also used for the new Renault Captur. It retains many of the classic original styling features although it now looks less contrived. It is also a shade larger so is more user-friendly for those owners with children, although adults will still find it a squeeze for headroom in the rear due to its sharply rising waistline and lower coupe-style roofline that ends at the steeply forward-raked rear tailgate.

The upgraded cabin retains some of its previous styling but reworked to create a more modern appearance with a higher level of quality materials and, of course, equipment and connectivity functions. Having said its rear seat headroom will be tight for some it is roomier — rear seat knee room has increased by just over two inches (58mm) and rear headroom by a tad (just 11mm). Usefully there's 20% more luggage space thanks to 422 litres of boot capacity with 1,305 litres when the split rear seatbacks are folded down. And it will tow a braked 1,250kg.

The improved interior design his finished with upmarket materials and ambient lighting. New soft-touch materials on the dashboard, door trim and footwells underscore the more upscale ambiance. The single-piece backrest seats add a sporty look and, depending on the spec level, can be upholstered in Alcantara and leather. On selected grades there's a Bose Personal Plus audio system option and which, if fitted, can be controlled via the 'floating' 8-inch infotainment display which also provides access to the Nissan Connect Services.

Naturally electrically-operated windows and door mirrors are included as is AirCon and, thankfully, separate heating and ventilation controls which do not have to be operated via the touchscreen. For peace of mind driving I would have preferred to have a space-saver spare wheel rather than the standard-fit tyre repair kit. All-in-all that's a very handsome 'spec'.

But when it comes to the engine there is so far only one choice — the new Renault/Nissan turboed 1.3-litre, 3-pot petrol-drinker with 115bhp and 147lb ft of torque from 1,750rpm. It's quiet, smooth and provides ample performance in this sensible SUV/Cross class.

The 7-speed dual clutch autobox's ratios are well spaced and make good use of the ample torque available impressively, providing good mid-range acceleration, and it coped well at cruising speeds. I did find that, on occasion, it snatched its gearchanges even in the less demanding Eco mode. It was also less lively during lower speed acceleration, as shown by the 11.1-second zero to 62mph acceleration time.

Much more important than the top speed — a modest 112mph — are the running costs. The official Combined Cycle fuel economy figure is 44.1mpg and my week of motoring covering both long and short journeys returned 42.1mpg. It would have been closer to the official figure but as tends to happen with hardworking 3-cylinder engines, 70mph motorway cruising dented the overall figure somewhat. The road tax costs with the 116g/km figure are a First Year rate of Ł170 followed by Ł145 at the Standard rate; Benefit. Insurance is an attractively-low Group 13E rating. Warranty is an ungenerous 3-years/60,000-miles.

The large 19-inch alloy wheels make for an unsettled ride quality at times. Generally the handling was sharp and the steering well-weighted and precise during cornering, and despite its tall design body-roll around bends was minimal. Visibility to the front and sides is good although limited for the driver to the rear-quarters due to the pillar design. However there are all-round cameras with sensors to help during parking.

Whilst the original Juke was the leader of the pack for the flood of me-too compact SUV/Crossover competitor models which followed it to market, after a long and successful first-generation lifespan the new Juke is now playing catch-up to what its newer competitors already offer. It's a tough and more competitive market place now so it will be interesting to see whether previous younger single/couples and older child-free empty-nesters take to it.

Very well equipped with numerous driving support, safety and connectivity functions, the Juke retains its iconic styling but in a more refined and upmarket way. Add in improved cabin quality, low running costs, and a competitive price and you have worthy 'built in Britain' contender. ~ David Miles