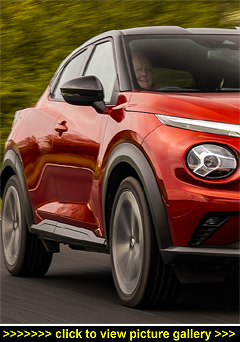 “Look at Nissan’s latest Juke and
you’ll see a snappily-styled small
SUV. What you won’t ‘see’ is just
how likeable it is to own and drive —
until, that is, you get behind the
wheel...”

WHILE THE FIRST-GENERATION JUKE was undeniably a saucy little minx and one whose quirky looks tended to split opinion like Marmite, this second-generation version is far more polished — both looks-wise as well as dynamically. In fact, it manages that hardest car-trick of all: to be a competent 'all-rounder'.

At the heart of its new improved appeal sits a very willing 1.0-litre three-pot turboed petrol engine. There's just the one powerplant at present and this peppy three-cylinder (badged DIG-T 117) unit pumps out a useful 115bhp backed up by an equally useful 133lb ft (148 with overboost) from 1,750rpm. These might not be mega numbers but then the Juke only weighs in with a 1,217kg kerbweight, so what power it does have goes a long way. For proof of that check out the benchmark 0-60mph acceleration: a brisk 10.7 seconds. Top speed is 112mph.

The gutsy 999cc engine is also surprisingly quiet — three-pot engines can be quite vocal, but the Juke's keeps itself to itself while carrying out your right foot's commands. While a six-slot stick shifter is one choice, our Juke came with the alternative — a seven-speed dual-clutch autobox with which it mingles nicely. Add to that respectable economy: officially mid-forties on the combined cycle but a smile-inducing and unlooked-for 54.7mpg on our week's hard-driven test over mixed routes. Now that's frugal with an 'F'. Emissions are equally likeable at 116g/km so won't ruffle the green part of your conscience.

But before you can drive you have to climb aboard; and before you can do that you need to approach. As you do you can appreciate the Juke's skillfully redesigned looks. True, the Juke still trades on flaunting its instantly recognisable styling although this second time around it's a far classier image. The sharp-end is striking, making excellent use of the Nissan brand's new 'V'-shaped nose flanked by striking 'Y'-patterned LED 'eyes'.

Adding extra attention-grabbing interest are the muscular — but not-overdone — extensions boldly capping the front and rear wheelarches, the smartly integrated 'concealed' rear door handles where the roof dips down to meet the sharply seamed rear haunches, and a contrastingly finished (Fuji Sunset Red on our car) sloping roofline that flows into a spoiler crowning the sharply raked rear screen.

And emphasising its high-riding stance are big 19-inch gloss black-and-machine-faced alloy wheels with a 5-arm design that makes them look fast standing still. And it all works beautifully: the Juke really stands out from the many rivals now crowding the small SUV class — a market it can take full credit for creating in the first place. Good news, too, for those with a yen to buy a non-European brand — the Juke's genes may be Japanese, but it's built in Great Britain (in Sunderland, actually).

Climb aboard the Juke (no hassle as keyless entry is standard) and you'll find an inviting and unexpectedly plush cabin decked out with upscale materials, leather and Alcantara upholstery, high-gloss black trim and some classy highlights such as the five tactile turbine-style air vents and 'floating' central touchscreen. Build finish is impressive too, positioning the Juke very close to premium players such as Audi's Q2.

The sporty Monoform seats are shapely with comfortable bolstering that ensures easy entry and exit, and they slide back enough for a six-foot front passenger to stretch out their legs. The fist+ of headroom is also better than average, and both front seats have manual height adjustment along with two-stage heating that quickly warms you at those chilly times of the year. The height-adjustable seatbelts are another appreciated must-have.

For the pilot, setting that perfect driving position is a moment's work thanks to generous steering wheel adjustability along with well-sited pedals. Buyers of small SUVs such as the Juke regularly cite a lofty driving position as a major pull — and the Juke delivers 100 per cent: you truly feel that you're sitting higher than the average bear. Especially when it comes to visibility. From behind the flat-bottomed, three-spoke, multifunction (with every function clearly marked) leather-wrapped wheel, and helped by a deep windscreen framed by slim A-pillars, the view down the bonnet is first-rate. And thanks also to the large side windows, particularly good when approaching junctions or waiting your turn on roundabouts.

Keeping an eye on what's behind you through the rear screen is also better than you might be expecting given the Juke's rear styling; not that you need to worry about parking because its rear-view camera with a 360-degree monitor serves up a bird's-eye view of the car when manoeuvring. Neither need you worry about where to keep your bits and pieces because cabin storage includes front door bins that hold large bottles with other stuff at the same time, a siamesed pair of deep, dual-use cupholders, a decent-sized glovebox, a good size cubby capped by the centre armrest, and a tray served by 12-volt, Aux-in, and USB jacks.

Comms are well specced with an eight-inch colour touchscreen fronting the infotainment system that also features navigation with TomTom Traffic and 3D mapping. As you will be hoping, all the usual goodies are bundled-in including Connected Services and WiFi, Apple CarPlay and Google Android Auto smartphone mirroring, and Bluetooth. The Tekna trim version also brings a punchy eight-speaker Bose Personal Plus Audio sound system to the party.

Crystal clear dials book-end the 7-inch TFT driver's information screen which shows important data such as a large roadspeed readout complemented by the posted speed limit shown just above it (if exceeded it flashes politely). There's voice control for the Navigation, Audio, Phone, and Info. And it's very good — for example, say 'Find Sainsbury's nearby / along route / near destination / city' then set as a destination or waypoint. Simples! Also liked was the button close to the main screen to toggle between night and day brightness — much more sensible that most systems which make you go through screen menus to do this. And, of course, there's also an 'SOS' button that enables you to contact the emergency services directly.

It might look compact on the outside but swing open one of the Juke's rear doors (take a quick bow if you spotted the concealed high-level door handles without a prompt) and you'll find it easy to get into the rear cabin, courtesy of the wide opening angles (not far off ninety degrees) and the tall, wide door apertures. Once in you'll also be pleasantly surprised by the amount of room for your feet, knees, and legs. Two adults will travel comfortably and relaxed; even three side-by-side is doable.

The stadium-style seating sits you six inches higher than those up front, affording back-seat passengers good views out through the tinted side windows. Adding to the physical comfort of the individually shaped seats is the muted ambiance, itself down to the quiet engine and minimal road and wind noise. Naturally there are full-width seatback pouches, usable door bins, and a USB port, as well as Isofix child seat mounting points on the outer seats (the front passenger seat gets them too).

Looking at those big 19-inch alloys wrapped in 45-profile rubber you might be worried about the ride quality. No need — even with its supermini-sized footprint, around urban landscapes the Juke rides decidedly well and is rarely bothered by the blacktop underfoot. The fluent damping extends to motorway trips too, and the Juke proved to be a very competent cruiser. A good ride in a small car — but does that mean a compromise too far in the handling department?

Absolutely not. Even with its higher-riding stance this latest front-wheel drive-only Juke is satisfying to drive — and that doesn't mean only on the 'perfect' stretch of road. There's plenty of grip available, body control is well managed, and the steering is fine and progressive enough to accurately direct the nose before feeding in the power to flow through the twisties. Its nimble handling is as honest as it is responsive, and fettled enough to keep you interested and entertained when pressing on without unsettling your passengers.

The Juke's D-MODE button offers Eco, Standard, and Sport driving modes although you can override the autobox with manual shifts using the paddles on the steering wheel for the best of both worlds. Equally important, shedding speed — even full emergency anchoring-up — is done fluently and reassuringly courtesy of disc brakes all round (vented at the front).

Helping to take the strain out of your driving is Nissan's ProPILOT and Traffic Jam Pilot (both standard-fit on automatic transmission Tekna and Tekna+ versions). Working together, along with lane-keeping tech and adaptive cruise control they provide a semi-autonomous, advanced driver assistance system that, on single lanes, dual-carriageways, and motorways, keeps your Juke centred in its lane. It also oversees the acceleration and braking while maintaining a safe distance behind the vehicle ahead. Just press the blue button on the steering wheel.

The Juke scores strongly with its two-level boot: at its topmost setting the boot floor sits level with the rear load sill, so sliding heavy or bulky items in/out is a piece of cake. And thanks to the 60:40-split rear seatbacks folding perfectly flat when toppled forward, the resulting loadbay offers a seamless and level floor for larger cargo. Should you wish to make use of the generous underfloor luggage compartment then it's easily accessed via the lift-up floor section — it's a useful space too, measuring the full width and length of the regular boot floor, and some six inches deep. Usefully the boot/loadbay can also be divided into two distinct areas by simply refitting the boot floor section at a 45-degree angle.

The Juke's load capacity is significantly better than those found in many other small SUVs, and further improved by the decent-sized tailgate aperture. With the rear seats in use it offers 422 litres (usefully square, and capable of swallowing bulky children's accessories or even a wheelchair). In full loadbay this extends to a very useful 1,305 litres.

We tested the Juke back-to-back with Nissan's larger Qashqai crossover and, amazingly, managed to shovel a similar amount of clobber into the Juke that had the week before gone in the Qashqai. Another 'like' is that the wide-opening rear doors make it easy to unload stuff from the forward end of the loadbay, thus avoiding the dreaded 'stretch' (if you've ever suffered from a bad back, you'll know just how important this is). Another 'plus' — the Juke will tow a braked 1,250kg.

It's no exaggeration to say that the very likeable and good-to-drive Juke is one of Nissan's best cars. In this hard-fought B-SUV class its comfortable ride, nifty handling, swish cabin, and practical boot make it a fine all-rounder that's impossible to fault — and with the bonus of being very affordably priced! ~ MotorBar