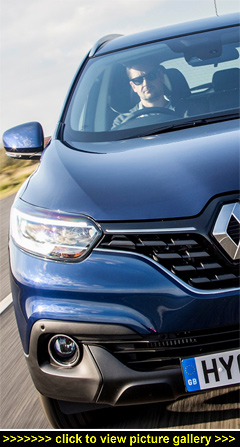 “Before you scour the words in this
review for what ‘Kadjar’ means, it
doesn’t seem to mean anything —
it’s just a name hatched up by those
creative marketing types. You know,
the people who came up with oddball
names for other new Renaults such
as Twingo, Twizy and Zoe...”

IT WAS THE QUESTION MOST ASKED of me during my week driving Renault's new crossover; more than price and more than performance — "What does Kadjar mean?"

The best answer I could find on the all-knowing www was that it really means nothing; it's just an amalgamation of different references and roots. 'Kad' is inspired by the world 'quad', the casual term for a four-wheeled all-terrain vehicle; and 'Jar' is a throwback to the French 'jaillir', which means to emerge quickly.

So there you have it. Want to know more about the Kadjar — the car, not the name? It's Renault's answer to their alliance partner's Nissan Qashqai, the vehicle that probably started the modern-day craze for crossovers. The Qashqai remains the UK's best-selling model range in the crossover sector. Such vehicles have been a huge global sales success story with one in-five new cars sold being a crossover.

As such they mix SUV styling with higher ground clearance, the versatile seating combinations found in MPVs, and deliver fuel efficiency almost as frugal as medium-sized family hatchbacks. These two- or four-wheel drive crossovers come in small, medium and large sizes and the Kadjar is in the same class as the Qashqai.

In the UK there's an 18-model Kadjar line-up offering the choice of three engines, two gearbox options, four trim levels, and 2WD or 4WD. Prices kick-off at Ł17,995 and run up to Ł26,295. The midrange 1.5 dCi 130 turbodiesel 2WD Dynamique Nav will likely be the most popular and costs Ł22,795. The engines on offer are all turbocharged, starting with the 1.2 TCe 130hp direct injection petrol, the 1.5 dCi 110hp diesel and the 1.6 dCi 130 diesel. An auto gearbox option is available with the dCi 110hp diesel unit and 4WD is offered as well as 2WD on the three top spec levels with the 130hp diesel engine.

Comparing prices to the Qashqai, the Kadjar is marginally cheaper and specification a shade higher but as we know it is the real-life transaction price offered by the franchised dealers that really counts. With over 80% of customers using a finance package to buy a new car, the monthly repayment or PCP contract purchase rate will also be a deciding factor as too will running costs and the warranty cover. Here the Kadjar is the clear winner with its four-years/100,000-miles versus the Qashqai's three-years and 60,000-miles.

When it comes to which one is the best performer, there is nothing really significant between them and in the end the choice will be down to price and which dealer the customer prefers.

This is a really important point where I would advise customers to compare and try both offerings and take a careful look at the finance deals before they buy. Just to muddy the waters, there is a wide choice of other C-segment crossovers which should definitely be considered and these include the Ford Kuga, Mazda CX-3, Peugeot 3008, new Honda HR-V, Kia Sportage and the new Hyundai Tuscon.

Renault sent me the Kadjar test car in the top level Ł24,795 Signature Nav spec but with 2WD and powered by the 1.6-litre 130hp (128bhp) turbodiesel engine. This develops 236lb ft torque from 1,750rpm and has a six-speed manual gearbox. For those wanting 4WD, this would add Ł1,500 to the price. Of course there are still more extra cost options and packs that can be selected and these include automatic parking at Ł500 and the premium leather pack including heated front seats at Ł1,250.

Styling-wise the five-door, five-seater Kadjar has similar body lines to the Qashqai but it is brand-similar to Renault's popular Captur compact five-door crossover. It has a bold front-end, large wheels that fit the raised wheelarches nicely, and there is a rising waistline and coupe roofline side profile.

Behind the rear seats is a large boot — larger than that in the Qashqai — which offers 472 litres of space with the rear seats in use and 1,478 with the rear seats folded down. The overall length of the vehicle is 4,449mm and the height 1,613mm; with a width of 1,836mm there's ample shoulder room and the elevated seating gives good visibility for all passengers.

The soft-feel textured fascia panel houses neatly laid-out, logical controls and instrumentation; the centrally-positioned touchscreen is easy to read although fiddly to use, and the menus could be simpler and more logical. The info system even includes a tutorial function on how to drive the vehicle fuel-efficiently.

The chunky gearlever in the lower console between the front seats I found heavy to use, and having long arms the gear knob was too high for comfort. Oddly, the brake and clutch pedals didn't offer the same feel and sensitivity as those in the Qashqai and it didn't always make for smooth gearchanges — particularly shifting from first to second.

Whilst the ride was comfortable, even with the large 19-inch wheels, it also didn't quite have the same sharp body control and handling finesse of the Qashqai. Neither was it so smooth and settled on winding roads, and even at moderate cornering speeds there was some understeer generated. On poorer blacktop the larger wheels and tyres also created significant road noise.

As for the engine performance, the 1.6-litre 130hp turbodiesel unit has responsive midrange urge for overtaking thanks to the 320Nm of torque it develops from 1,750rpm. Equally, this unit gave smooth performance during stop-start traffic and it proved to be relatively obliging around town, apart from the feel of the not very sensitive clutch pedal.

Out on the open road, cruising was effortless with relatively low noise from the engine although there was noticeable wind noise from the area of the front pillar and doors mirrors. The ECO mode was used most of the time and it hardly dulls acceleration. Flat-out it will run to 118mph and nought to 62mph takes 9.9 seconds.

Officially this model will return 62.8mpg in the Combined Cycle but during my test, cruising on motorways returned 52.2mpg; overall, including some country road driving and a few short commuter trips, this dropped to 48.4mpg. Emissions of 117g/km mean road tax is Ł0 for the first year, increasing to just Ł30 for the following years.

The Kadjar is an important addition to Renault's range because it gives them an impressive presence in the fastest-growing sector of the new car market. Is it better than a Nissan Qashqai? It's cheaper, has smart practical styling inside and out, is well equipped, serves up a comfortable ride, is spacious with a large boot, comes with a long warranty and low running costs and is almost as good to drive... but not quite.

So it looks like the deciding factor for many would-be Kadjar owners will be the actual transaction price and quality of the customer's buying experience in the dealership. — David Miles