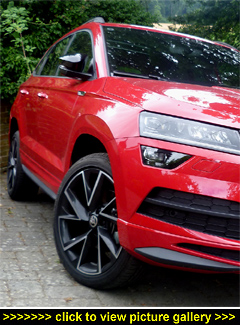 “Today’s ‘normal’ family car is no
longer an unadventurous hatchback
but a compact crossover or SUV.
And if that’s what you’re after then
the first place to look is inside
a Skoda showroom — where you’ll
find the impressively-all-purpose
Karoq...”

THERE'S PLENTY TO LIKE about this practical and versatile mid-size SUV — especially if you opt for the new SportLine trim. While the regular Karoq models are easy on the eye, the SportLine noticeably ramps up the visual ante with a sporty vRS-style bodykit, rear diffuser, sports bumpers, and a set of snazzy 19-inch alloy wheels finished in metallic anthracite along with some purposeful black garnishing to the vertically-barred grille, door mirrors and roof rails. The eye-catching Velvet Red metallic paintwork that graced our SportLine is included in the price and boosts the kerb appeal even more.

The sporty theme continues inside the cabin, most notably with the smartly upholstered sports seats — covered in a tactile fabric with silver stitching and enhanced by diamond-patterned centre panels. The well-shaped, firmly-bolstered (exactly what you need off-road or when pressing-on) and three-stage heated seats are as comfy and supportive as they look with effective lumbar and shoulder support, plus there's more than a fist of headroom.

Long seat bases deliver meaningful under-knee support and the footwells are big enough to keep boot-wearers happy; the driver enjoys big polished alloy pedals and a comfortable left-foot rest. Height-adjustable belts and long armrests on the doors as well as a padded, slide-adjustable central armrest all add to the comfort and, driving or riding shotgun, the front seats are perfect for both short and extended trips.

Settled in the driver's seat you'll feel very much at home; ahead of you is a three-spoke, flat-bottomed multifunction steering-wheel that's wrapped in perforated leather — and it looks the biz, as does Skoda's Virtual Cockpit full digital instrumentation and driver's information display (an extra Ł450 but well worth it). The dash ergonomics, too, are spot-on and the ambiance is further lifted by decorative carbon-pattern inserts and high-gloss black with chrome highlighting and filleting.

From behind the wheel the driving position is commanding — the front seats are set high off the floor — and guarantees an uninterrupted view over the bonnet, making accurately placing the Karoq child's play. Views through the large rear screen are equally informative, helped by the three rear headrests sitting low when not in use. And not only can you see and be seen but you can also be heard — thanks to a path-clearing two-tone horn. Over-the-shoulder visibility is also good although if you're one of the newer breed of drivers you'll likely be watching the rearview camera and listening to the parking sensors.

As befits a family-serving SUV there are plenty of cubbies — in particular a large storage box between the front chairs big enough for my car-loving cat to curl up in for a snooze while I was washing the bodywork! In addition there are long, deep and very accommodating front door pockets (each will hold a 1.5-litre bottle), large chillable glovebox, lidded smartphone-holding oddments tray with 12V power and USB port ahead of the selector lever, and a multi-use 'coin-box' in the dash. Other well-considered touches include 'sleeve' pockets on the inner sides of both front backrests, a useful net pocket on the passenger's footwell central tunnel plus an umbrella stored in another compartment under the front passenger seat.

Comms are comprehensively covered by Skoda's own Amundsen infotainment system with a high-res 8-inch touchscreen that makes a sleek high-tech statement in the cabin. The display is also home to the built-in SatNav plus there's voice control, Bluetooth and integrated WiFi Smartlink+ for full smartphone connectivity. Entertainment includes a DAB radio while an extra Ł550 buys you an impressive 575-watt, ten-speaker Canton sound system.

The Amundsen system is one of the better systems and it's fast and responsive whether you use a fingertip or spoken commands; quick-jump 'soft' screen buttons for the menus work seamlessly, as does the rotary knob for speedy 3D map zooming. Filling the instrument panel is Skoda's upscale Virtual Cockpit; the 10.25-inch screen's digitised 'dials', graphics and fonts are modish and elegant and there's a choice of five different views, plus the mapping can also be shown here.

The SportLine come with plenty of other 'toys' — and not just for the boys. Apart from all the kit mentioned throughout the review there's also keyless entry and start, a panoramic sunroof with a tilt-and-slide front section and one-shot powered blackout sunblind, very efficient dual-zone climate control with a pollen filter, electric parking brake with auto-hold, tinted and, at the back, privacy glass, cruise control with speed limiter, auto-dimming rearview mirror, electrically-adjustable, heated and powerfolding (on demand and automatically on leaving) door mirrors with auto dimming and boarding spots, four one-shot electric windows, and LED ambient lighting in the decorative doors strips that can be set to one of ten colours.

Safety kit is well specced too, starting with Front Assist (incorporating city emergency braking and pedestrian monitoring). This uses radar to scan a large area ahead and also works reliably in poor visibility. Should the system sense that a collision is imminent, it warns the driver in stages. If necessary, it can initiate automated braking up to a full emergency stop. City Emergency Brake is active up to 20mph; the standard Pedestrian monitor feature complements Front Assist and will initiate an emergency stop at speeds between 6 and 37mph if a pedestrian attempts to cross the path of the car.

The Karoq is big on personal space whichever end of the cabin you sit in, and a quartet of adults can travel in genuine comfort. A generous glasshouse with large, long side windows provides a full fist of headroom for those travelling in seats three to five. Neither does anybody — even large adults — go short of legroom or bang their knees, while the relaxing backrest angles of the 'individual' outer chairs make the rear cabin as inviting as the front. Even three side-by-side is sociable rather than squished. Better still, backseat passengers sit about six inches higher than those in front and enjoy clear views forward as well as out to the sides.

And don't forget the extensive glass roof — not that you cold because it runs all way back to the rear headrests and floods the whole cabin with light. Equally likeable is the wide, well-padded centre armrest with triple cup holders, effective reading lights, dedicated air-vents, two front seatback pouches, and bottle-holding door pockets.

Rolling on 19-inch alloys shod with 225/45 Bridgestone Dueller, you could rightly expect the ride to be somewhat on the firm side. Actually, combined with a suspension set-up that's inherently 'predictable', the ride is unexpectedly supple and manages our bumpy British blacktop rather well. Even these grippier, bigger-wheeled versions feel very settled and do a decent job of cosseting their passengers — definitely no high-ridin' floatiness and consequently no queasy passengers. No surprise then that wafting along at the legal limit the SportLine's cabin is a restful place to be.

In addition to the autobox's Sport setting the SportLine also comes with Drive Mode Select which offers five self-explanatory driving programs: Normal, Eco, Sport, Individual and Snow. There's also an Off Road button by the selector lever for full-on four-wheel drive. And while the Karoq doesn't — thankfully — look like a full-blown Beyond The Thunderdome off-road-warrior, there's plenty of grip available on- and off-road. Factor in quick, precise and decently weighted steering, well-managed body lean and tidy roadholding (corners feel more like bends) and you'll find the Karoq to be competent and reassuring and it will do all you'll ever ask of it without even a hint of drama.

Petrol or diesel; the choice is yours. Choose from 1.5 and 2.0 litre TSI petrol-drinkers with either 148 or 187bhp or opt for a 2.0 litre TDI oil-burner that also comes in the same two power ratings. Our test car's 187bhp TSI was partnered by a seven-speed DSG autobox and it's a well-matched marriage that includes paddle-shifters on the wheel's horizontal spokes. Press the keyless Start button on the side of the steering column and the 2.0-litre four-pot fires up instantly and idles smoothly.

It only takes a few moments to discover that this petrol engine is eager to please; punchy and willing (peak torque is a muscular 236lb ft from 1,500rpm), it feels satisfyingly quick on the road — as it should given a sharp 0-62mph time of 7 seconds. For really focused overtaking simply nudge back the selector lever to instantly switch between Drive and Sport (or vice versa). The top speed, should you decide to go there, is 131mph.

In days gone by the powerplant choice for a family workhorse would have automatically been a diesel unit but this petrol engine's 236lb ft of torque is more than potent enough, even when fully laden with peeps or cargo, to faithfully do its duty. And, with four-wheel drive there's never any problem getting the power down whatever the weather. It's no gas-guzzler though — in the real world over the course of a week's hard driving we recorded (Yes, we were pleasantly surprisingly too!) an overall test average of 38.1mpg, bettering the official combined cycle figure of 32.1-33.2mpg.

The 'compact' Karoq measures a shade under 4.4 metres long and at the tail-end you'll find a pretty ginormous boot — at 521 litres it's one of the largest in its class. Most families will likely be hard-pressed to fill that. Another welcome feature is the fitted reversible boot liner with a tough rubber side for dirty work — and dirty dawgs! Access is straightforward courtesy of a powered tailgate with fast opening and closing operated from the key-fob, the 'gate itself or the switch on the driver's door.

The tailgate rises high to reveal a wide opening made even better by a low lip for hassle-free loading. Pull the levers in the boot and the rear seatbacks spring forward and self-fold to free up a substantial 1,630 litres for cargo. For the record, Karoq models fitted with the Varioflex sliding rear seat system boast an adjustable luggage capacity of between 479 and 588 litres with three seats in situ, which can be extended to 1,810 litres with all three seats removed from the vehicle.

Yet another of Skoda's 'clever touches' can be found in the boot — a rechargeable and removable LED torch that doubles as a boot light. Three strong repositionable bag hooks are mounted on a slide-rail running along the boot's left-hand side; there are also several adjustable securing straps and a full set of stretchy netting to keeping everything shipshape. Extra-long items are easily accommodated thanks to the larger section of the 60:40-split backrest incorporating a generous load-through hatch. And if you need to get serious about towing then the SportLine's torquey 187bhp engine will happily oblige — hauling a braked 1,900kg is a walk in the park for it.

The Karoq is a very good choice for an über-practical and family-serving crossover (it recently scooped What Car? magazine's 'Best Family SUV for Ł18,000-Ł30,000' in its 2019 Car of the Year Awards). It's also stylish and roomy with versatile interior and cargo space and it's 4x4 can be relied upon to get you just about anywhere, anytime. If we were spending our own money you can be sure that one would be on our driveway now! ~ MotorBar