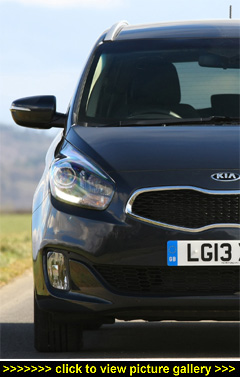 “Car names are tricky things,
particularly as they have to work
internationally: a favourable
meaning in one language can be
bad news in another. Fortunately
for Kia, their smart new MPV
bears an upbeat one — Carens...”

CAREN IS "A GIRL who's attractive both inside and out, a real sweetheart able to make your day, and someone you can be best friends with." Sounds a tall order for a person, let alone a car. So how much of a Caren is Kia's Carens?

We've just spent a week with the all-new Carens; one of the line-up's turbodiesel versions with mid-range '2' trim (refreshingly, Kia avoids fancy trim level names and just does straightforward 1, 2 or 3). Our test car had 1.7 litres, four cylinders, and 114bhp under its bonnet, as opposed to the more powerful 134bhp unit. Were we bothered?

Not at all: the 114bhp provided ample 'get up and go'. Top speed is an all-you-need 112mph. Zero to 60mph takes 12.6 seconds but it certainly doesn't feel slow — that's because it develops 192lb ft of torque from a low-down 1,250rpm, and its on tap right through to 2,750rpm. So unless you're constantly bouncing off the rev-limiter like The Stig, you'll always have plenty of muscular torque working for you; and also in reserve whenever you change up. Even in sixth gear travelling at the legal limit there's plenty of pick up, without any need to drop down a gear.

All of which makes for pretty refined, fairly effortless and hassle-free driving — just what the doctor ordered for today's stress-rich traffic conditions. That's not the best of it though because this diesel-powered Carens goes easy on the fuel even when you're not going easy on the throttle.

The lime-yellow 'EcoDynamics' badge on its tailgate signifies it comes with Kia's ISG (Intelligent Stop & Go) engine stop-start system to maximise fuel consumption. As they say, every little helps...

And it clearly does. Officially this 114bhp engine averages 60.1mpg, with 68.9mpg extra-urban and 48.7mpg urban. Real-world driving during our busy week behind the wheel came out at an impressive 48.3mpg.

We worked our Carens pretty hard, moving quite a lot of household items — little and large — including transporting a heavy electric single bed complete with mattress in its longer, wider and taller loadbay (yes, it fitted in okay — more about the Carens' multi-configurable inner space later).

Most drivers of a seven-seater people carrier will be satisfied with the near-50mpg mileage. They'll also be happy with the standard six-speed manual gearbox — its first-rate, foolproof change action is light and clean and the ratios are well stacked. Good enough to make light work of shunting around town; and equally agreeable round twisty country lanes.

The Carens also rides compliantly and makes smooth work of negotiating road imperfections; even the dreaded speed humps. And it doesn't come at the expense of safe and unexpectedly nimble handling. Obviously MPV buyers aren't expecting GTi thrills but even so the Carens, which feels competent and composed, handles more than keenly enough for a seven-seater. In fact, it steers and drives as fluently as a polished family saloon. Also reassuring is the standard-fit Electronic Stability Control as well as the smooth-working Hill-start Assist.

The steering feels fine around the houses as well as on the open road and comes with Kia's Flex Steer system which, at the press of a button on the steering wheel, instantly adjusts the weighting between Comfort, Normal and Sport. We would expect most drivers to leave it in the perfectly okay Normal; Sport offers a bit more heft for enhanced stability at higher speeds while Comfort is handy for lots of wheel shuffling when parking in tight spaces.

From the tip of its 'Tiger Nose' (a now immediately-recognisable Kia trademark) to its raked rear screen with its neatly integrated rear spoiler, the Carens is a smart-looker. Not just the same-old, same-old new breed of crossover 'smart' — but characterful enough that you won't have any trouble finding it in the car park.

Getting in is easy thanks to wide opening doors. Inside, the smart looks continue with a sweeping dash and attractive styling. Gloss black carbon-fibre-patterned trim to the fascia, and repeated around the gear lever console, transmission tunnel, steering wheel and slim door inserts, looks classy; satin chrome highlights are used sparingly but effectively around the cabin and the soft-touch trims have a tactile feel. Fit and finish is hard to fault.

Generous glazing works both ways: it ensures an airy cabin as well as fine visibility out (all the headrests for seats 3-through-7 have headrests that drop down when not in use to maximise the driver's rearward view). Good to know, too, that in wet weather the wipers wipe just about every inch of the windscreen.

Sit in any of the well-shaped seats (woven black cloth with a keep-clean texture) and you'll immediately feel comfortable — a feeling that lasts for as long as your longest journey's length. Upper back and shoulder support is good and the bolstering keeps you easily in place — and there's almost enough headroom for you to keep your hat on.

An excellent driving position is set in seconds. Long distance drivers will appreciate the restful left-foot rest and the fact that the centre armrest doesn't cramp the traditional handbrake. There's a handy drop down 'conversation' mirror that keeps the driver visually in touch with the rear five seat occupants — a boon if you have fidgety kids aboard. For the same reason, also useful is the 'buckled up' display.

The clear set of dials in the black instrument cluster come with crisp white markings and an equally sharp driver's info display for range, mpg, etc — information is called up via a button on the multifunction (audio, voice, phone, cruise, speed limiter) steering wheel.

Non-robotised drivers will like the fact that you can switch off the one-touch indicators; others will be pleased that they can be set for 3, 5, or 7 flashes. AirCon is of the 'set 'n' forget' kind and more than man enough for the job of keeping seven cool.

While we're 'in' the cabin is a good time to take stock of all the standard kit that comes with a mid-level spec Kia: privacy glass, drive-off auto locking, power-operated heated door mirrors with powerfold (on demand and when locking and leaving), dual-zone AirCon with rear air ventilation, four power windows with one-shot on the driver's door, multifunction leather-rimmed steering wheel, cruise control with speed limiter, six-speaker RDS radio/CD with MP3 compatibility and Bluetooth with voice recognition and music streaming, and a rear 'conversation' mirror.

And while at 4.5-metres long (4,525mm to be precise) it's slightly (20mm) shorter, narrower (15mm) and lower (45mm) than its predecessor, the Carens wheelbase has grown longer (by 50mm) to provide a spacious seven-seat interior all neatly packaged into a usefully more compact road-print than the competition.

Row-two passengers are as well catered for as those ahead of them, with loads of space around their heads and legs and reclining seatbacks to boost comfort levels. Three can travel comfortably side-by-side. Seats 6 and 7 in the third row will accommodate an adult but really are best for youngsters.

When it comes to versatility the Carens has got all the boxes ticked. For a start there are enough cubby-holes for a carload of 'tidyholics', including two under-floor bins in the second row as well as a cooled glovebox plus sturdy pop-up picnic trays on the back of both front seats. Carens is nothing if not a considerate hostess: nobody goes without a cupholder!

And, depending on whether you want a bigger boot or to accommodate longer legs, each of the middle row's three individual seats (all with built-in three-point belts) slide fore and aft independently of each other. Fold the centre seatback and you have an impromptu table handy for refreshments or elbow room.

This second row also folds totally flat for cargo lugging, as so too do the separate full size chairs in the third row that pull up out of the boot floor when needed. Five-up, boot space is a regular-shaped 492 litres with 1,650 litres available in two-seat mode — which also gives you a totally flat loadbay floor. Oh, and the front passenger seat backrest also folds down flat for transporting extra-long items.

There's even a dedicated under-floor compartment to store the luggage blind cartridge along with the luggage net and tools. And you get a pop-out rechargeable torch that doubles as a second boot light. Should you ever get a puncture you'll be pleased to find that there's a space-saver under the boot floor, accessed externally so you don't have to unload the boot to get it out.

If you had to pick its most likeable trait from its many good points it would be its unruffled nature: whatever you ask it to do, whether it's carrying a full load of people in comfort or lugging cargo securely, the Carens does it well and does it all without fuss.

If you're looking for a seven-seat MPV — or even if you're not! — it's a rock-solid buy that's pleasant to drive with the added peace of mind of a seven-year transferable warranty. So, could Carens be your new best friend? In the Irish reduplication words of a friend: to be sure to be sure. — MotorBar